But Paul Dresher has confirmed that, while Garcia was in the ad, he did not play this night. 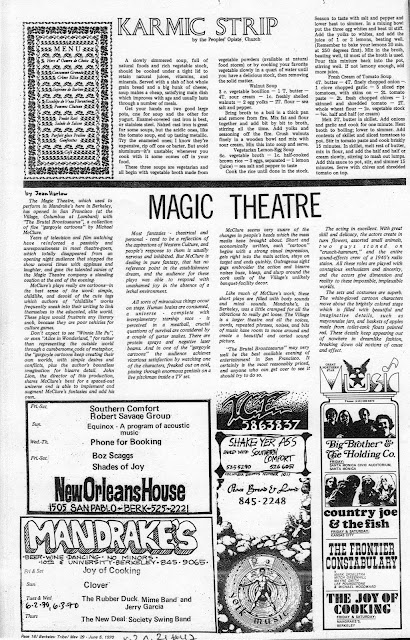 So, the Mandrake's ad from the Berkeley Tribe v2 n21 (issue 47) (May 29 - June 5, 1970), p. 16, lists the following for Tuesday & Wednesday, June 2-3, 1970: "The Rubber Duck Mime Band and Jerry Garcia." It looks to me like there was some last-minute rough resetting of the listing. I am going to assume that this is the New Riders of the Purple Sage, probably warming up for the big Fillmore West gigs that would run June 4-7, 1970. That would be the first hometown appearance of the "An Evening with the Grateful Dead" format, and I am guessing they wanted everything to be Just Exactly Perfect (i.e., rehearsed/warmed up). Since COAU doesn't list this, I thought it should be added to our various lists.

It seems that Garcia was used in the advertising, but didn't play this gig with the Rubber Duck (nor was it a NRPS gig). Paul Dresher, commenting chez LIA:

Glen [Frendel] played the Mandrakes show that some think Jerry Garcia also played. I was there, and Garcia did NOT play that evening. I would have remembered that well, as at that point, Jerry was my greatest guitar hero and the Dead my favorite band. While Garcia’s name might have been in the marketing for the show, he didn't play that show, Glen did.