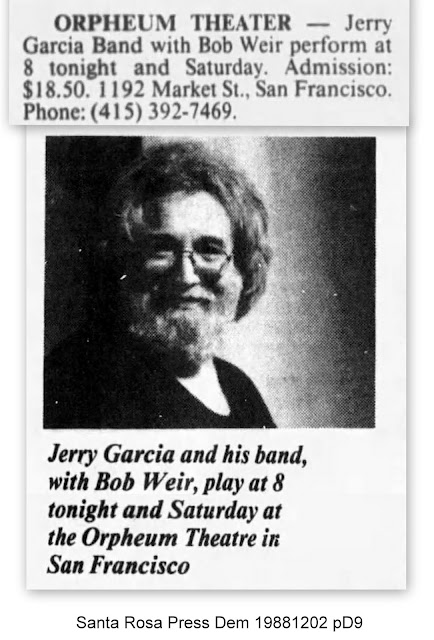 I absolutely love 1988 JGB. There's not much of it, but it's mostly all light and bouncy and healthy sounding and interactive and good. He does speak from stage here, as he did on 7/10/88. That's kind of noteworthy, I guess.

That said, just spun 12/3/88 and it left me whelmed. Bill Reutelhuber made a characteristically great tape, but the show never really goes anywhere. At around 50 minutes each, these sets are quite short. Maybe ol Jer was saving himself for the next night's Bridge Benefit. I dunno.
update: the night before no great shakes, either

! P: s1t01 CUTS totally unobjectionable, doesn't take too many turns at the end.

! s1t02 (1) Something happening that I can't quite figure out, but Jerry give the crowd a showbiz "Thank you, thank you", to general appreciation.

! P: s1t03 RFTR slowly paced, and some lyrical flubbing out of the gate, as had also happened with Forever Young. I know he played the night before, but he's sound a little sluggish so far.

! P: s1t05 TNTDODD hadn't been played in over a year (10/27/87). I like the intense stacking and picking guitar work 4:20ff, sliding down a string. 5 Melvin takes a turn, not as arranged, I think, but Jerry had already departed from it by doing verses out of order, I think. So he comps for Melvin, who swirls his stuff for a minute, JG digs a little deeper late 5 over 6.

! P: s2t01 HTC I had been hoping they'd come out with more juice in set II, but this still crawls out of the gate a little bit.

! P: s2t04 Think - I could defend the argument that the '88 versions of this tune are the best versions.

First night of the fall '77 Garcia Band tour (22 gigs in 22 nights), third live gig for young Buzzy Buchanan in the drummer's seat. The great Jerry Moore had some nasty thoughts about him, but I think he sounds fine here. Keeping time for this group could not have been a picnic.

I have covered the Fall '77 tour in a number of posts, and David Davis has done a couple, as well.

Musically, the true segue between "I'll Take A Melody" and "Don't Let Go" is quite interesting. Garcia Band didn't do such things all that often, and it just sounds like Jerry asserts the change and everyone else falls into line.

Also noted is the vast expansion of "Don't Let Go" and "Lonesome And A Long Way From Home". Here, they run14+ and 9+ minutes respectively. By later in the tour (12/3 and 12/9, respectively), they'd each clock in at a much chunkier 27 or so minutes. So Buzzy gets a few iterations to play it pretty straight, but by the end of the tour he's swimming in the deep end.

The recording is fine, with some hiss, swish, wow and flutter, especially from tape 1. AF did yeoman's work, as he always does, marrying it to tape 2 and sharing it out.

Maria is absent, for reasons unknown.

! historical: first show of the fall 1977 Garcia Band tour, 22 shows in 22 days November 20 - December 11. Ronnie Tutt had left the live band that summer, and young Buzz Buchanan came on board, drumming through the end of the band's run in fall 1978. This is his third show, and he sounds just fine.

! P: overall, the show strikes me as solid but not remarkable. The true segue between ITAM and "Don't Let Go" is the most interesting part, musically, and is really kind of out of the blue. At 14 minutes, DLG is half as long as the monster they played at Hartwick College 13 days later (12/3/77). Size isn't everything, of course, but this version never achieves escape velocity. The following LAALWFH, on only its second spin after more than a year away (9/18/76, then 11/16/77 preceding this version) also has not found its legs - at 9 minutes, it was one-third the length of the 27+ minute iteration at Stony Brook on 12/9/77, which got waaaayyyy out. So this certainly sounds like a band breaking in a new guy on the first night of the tour.

! R: Note: This show was previously listed in etree as having taken place at the Forum Theatre in Binghamton, now listed here with the correct venue. This file-set presents the entire concert together, with thanks to JGMF and Rob Berger for the sources!

! R: JGMF's CDR provides HSII thru TWYDTTYD ("tape 1"), with the balance of the show from ID-132097 ("tape 2"). These appear to derive from the same root (mono) SBD. Both sources were re-mixed a bit to better match each other. Tape-generational hiss remains, particularly in parts of "tape 1" where low-gain sections were raised. There's also some minor tape speed fluctuations & warble audible in the "tape 1" material (STOF & SIR).

! R: Pauses and cuts were left as-is, no cross-fades were added. SIU cuts in near the beginning. There's a fade-to-cut in SIU at 6:51 (from the source CDR) but it appears that no music is missing there. Another fade-to-cut in TWLWMYD at 7:15 with the end of Keith's solo missing. LITA cuts in with about a minute missing from the beginning. Cut in ITAM at 2:13 with about 45 seconds missing. (Small FLAC size is due to mono WAV data.)

! P: s1t01 HSII he flips the first two verses. I tend to appreciate this, becuase while there's an intial flub, he is tuned-in enough to make it better.

Makes Up In Enthusiasm What It Lacks In Precision: JGB at Keystone Palo Alto, November 12, 1983 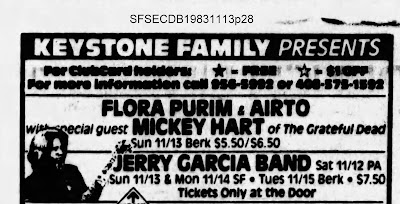 update: d'oh! Already posted this one.

Crispy clean but flat and unbalanced sbd meets in-your-face but unbalanced Menke aud to make for a sweet matrix. Thank you Andrew F. for your work!

The show? It's late '83. The sets are getting shorter. The DLG is fucking killer, and the Deal makes up in enthusiasm what it lacks in precision, which summarizes the show as anything else I might say.

The ad is a great illustration that Garcia, alone among the GD guys, systematically refused to leverage his GD ties to sell tickets to his side projects. Here, we see Mickey showing no such reluctance. Of course, by this time Garcia didn't need leverage to sell tickets. He just needed a pulse and a guitar.

! P: overall: two relatively short sets. I have been engaging the 90s a bunch lately, and sets were typically running 60-80 minutes. We aren't into Jerry's Rock Bottom period just yet, IMO, but short sets were a leading indicator. That said, while I didn't note anything particular from set I, the Don't Let Go in set II is outstanding, with all kinds of modal jazzy spacey goodness, and overall, as I say of Deal, the show makes up in enthusiasm what it sometimes lacks in precision.

! R: What a great matrix. The sbd is flat as a pancake, all vocals no guitar, the aud is all guitar and drums, no vocals.

! P: s2t03 DLG this is really good. I can't pinpoint many specifics, but it's very jazzy and nicely spaced out. Late 15 again, but all throughout, this DLG spilled over with great ideas, then a true segue into Deal. Nice

! P: s2t04 Deal the Elmer Fudd vocals out of the gate are not great. He seems to skip a turn at a verse in the 3 minute mark, gets right to the guitar playing, which is strong. It's a little sloppy here and there, with Jerry just charging ahead and forcing various and sundry drummers and vocalists to adjust on the fly, but what it lacks in precision it makes up in enthusiasm.

UPDATE: someone on Twitter, I can't recall who, points out that this is very likely to be a mislabel of 1/8/84, and I agree. No ads, no listings, and a setlist very similar to what we know for 1/8/84. I now consider this a phantom gig.

Man, for all kinds of reasons, I need to hear 1/8/83. Please call your old tape trading friends, rifle through shoe boxes, and help bring this one into the light of day.