Does anybody know how to reach Matt Kelly?

I am hoping to find dates for the 1973 Record Plant session work, with Jerry, that ended up on Wing And A Prayer. Email me if you have email for him, or point him here. TIA!

A lot of good material at the Bridge Benefit, 12/4/88 in the Oakland Coliseum Arena.

It's not like 15-20 minutes was very demanding, but Garcia sounds much more enthusiastic belting out the backing vocals here on "Wang Dang Doodle", and giving "Friend Of The Devil" a sprightly run-through, than he did on either of the two previous nights with JGB at the Orpheum (12/2, 12/3).

This is one of the very few documented Shared Stages between Garcia and "Mr. Forever Young", as Bob calls him, Neil Young, who drops some decent harp on WDD.

Jerry did many hundreds of interviews over the years. He had a lot of interesting things to say about a lot of topics. There are also lots of quotes and so forth that circulate without any proper metadata.

So, we, and by we I mean the community, need a Jerry Garcia interviews project. Collect 'em up in video, audio and text formats, and eventually get everything transcribed to text. Dates, as best as possible. Etc. Run a blog that gathers them up, a la LIA's Deadsources.

I don't have time to do it, myself, but I have plenty to contribute. Someone out there would be game for it. Maybe it's you! Step up to the big leagues of obsessiveness and tackle this project!

You Know What's Crazy? I Have Never Listening-Noted a Garcia-Grisman Gig 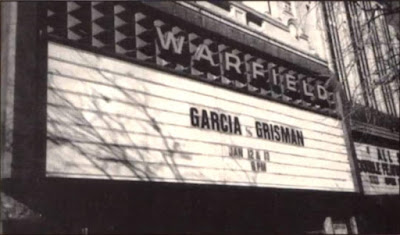 The performances are delightful, and I don't have tons of comments at that level. They play a number of rarities which had been relatively recently released on Not For Kids Only (Acoustic Disc ACD 9, 1993), and I am a huge fan of that record, which was recently remastered and topped-up with some bonus tracks. The first two tunes on the record are "Jenny Jenkins" and "Freight Train", which I played a LOT for my kiddos and which are both burned into my DNA. JJ kicks off set II of the first night, while Freight Train, which had gotten a one-off breakout with JGB on 11/3/93, happens in set II of night two. Merle Travis's coal miner's lament "Dark As A Dungeon" was a real highlight for me - I recommend it via the video of 1/12/94. But, really, I have to say that I love every single song they played.

There is no banjo playing at these shows, and I think at least "Stealin'" and "Jenny Jenkins" are done as David and Jerry duets.

Set I the second night is quite short, about 36 minutes. Some number of those minutes come out of the great Garcia-Grisman composition "Grateful Dawg", which clocks in here at a mere three-and-a-half minutes. I don't have specific timing for earlier versions, but I want to say they might have gone 6 or 7 or more.

I do want to provide a little repertorial analysis to illustrate the range of (mostly) American musics from which Jerry and David drew, and to which they contributed in turn. Some data next. 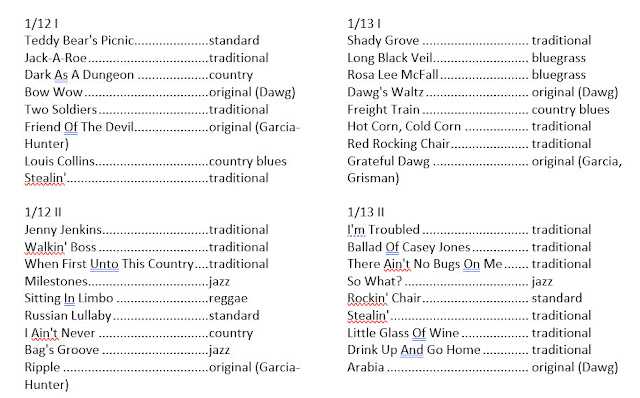 I am wide open to suggestions about this set of classifications. In particular, I have in my mind a genre called country blues which I guess is black acoustic, but, again, I don't really know what I am talking about. I have only just come to understand what a standard is. The next table summarizes the shows by genre. 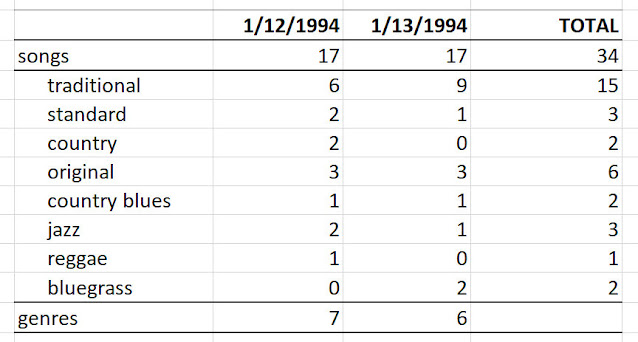 I guess the main take-home from this little exercise is that the first night was a little more contemporary, while the second was a little more traditional. Anything else jump out at you?
Anyway, totally wonderful to listen to these. I was responsible for the earliest seeds of these two shows, which were not very good. Then they were remastered by someone else, not very well. While a bunch of other sources for 1/13 have come about, 1/12 was only very recently upgraded from the recording annotated here, pulled by Steve Fink. So we now have very good tapes from both nights, and they are worth your ear time.
~~~~~~~~~~~~~~~~~~
LN jg1994-01-12.jgdg.all.aud-Fink.150311.flac1648 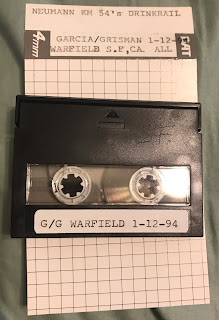 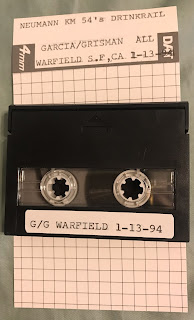 Garcia and The Great American Songbook

Per wiki, The Great American Songbook is "the canon of significant early-20th-century American jazz standards and popular songs". It is put out by The Great American Songbook Foundation, fittingly enough.
I have so damn much to learn about this stuff. It's just a gaping hole in my (admittedly limited) musicological understanding.
I just fell into the rabbit hole, so let me report here the tunes from the GAS that I understand Garcia to have engaged.
Here's another listing: http://greatamericansongbook.net/pages/cat_pages/title.html
Posted by JGMF at 17:31 13 comments:

This happened without my noticing at the time (whenever it was in that accursed year, just passed, that shall not be named). But Acoustic Disc has remastered the Not For Kids Only (Acoustic Disc ACD 9, 1993), added four bonus tracks, and offered it up for download. I am spinning the high-def (24bit / 96 kHz) version now, and it sounds gobsmackingly great. (The original did, too - tip o' the cap to "Decibel" Dave Dennison.)

The unreleased tracks (alt. takes of Jenny Jenkins, Three Men Went A-Hunting, Teddy Bears’ Picnic, and There Ain’t No Bugs On Me) are Jerry-David duets. Alas, they are undated. I will try to see if AD will answer a query as to the dates. Let me say here that Grisman and Garcia are too important as American musicians, and this material is too important as American music, not to give it the jazz treatment, with full metadata. I have never understood why they hold things like the dates close to the vest.

I have just posted an updated bibliography as a blogger page linked to the top-right and as a pdf. 114 pages, and I have made no effort to gather GD stuff, though some has snuck in.

The Romanesque Church Design Was Based On The Roman Basilica: Discuss (JGB at the Knick in Albany, November 3, 1993)

I just marveled at the almost 90-minute second set offered up on 12/22/90, and got to wondering about post-coma others that might match or beat it in duration. I recalled some long sets on the 11/93 tour, recalled that I had unposted (because not very informative) notes on 11/3/93 (my 23rd birthday, though I was somewhere in the vicinity of Monterey, CA), and checked them out.

Indeed, 89+ for this set II. We are envisioning being able to analyze real data on set and show durations via Jerrybase at some point in the not-too-distant future. 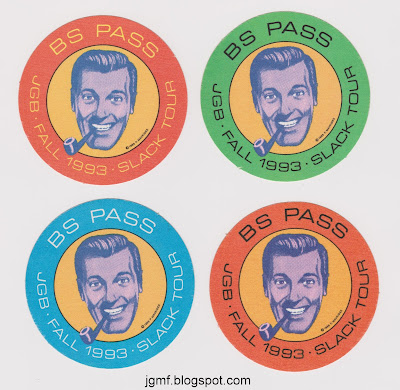 The show is maybe below average for the tour overall, with a few guitar highlights that I mention in the notes below. The real interest lies in the impromptu version of  Elizabeth Cotten's "Freight Train", which Garcia plays with an acoustic sound as a 'quippie fixes a string on John's bass. First, he lets the crowd know what's going on: "We've gotta change a string on the bass. You can all talk amongst yourselves." This latter formulation absolutely, positively echoes Mike Myers' contemporaneous SNL skit "Coffee Talk" - I use it myself when equipment challenges interrupt my teaching. I may also give a topic, as Linda Richmond does in the skit. In my case, it's something on-topic like "Vladimir Putin: strong man, or the strongest man? Discuss." In hers, the title gives a sample subject.

Then, without further ado, Our Man in Albany starts picking the tune. Melvin Seals accompanies extremely well on piano, so well that it makes me wonder how he knew the tune, since it is not associated with the "Band Electric". Maybe they had worked it up? I certainly would have liked to hear it more. Anyway, Melvin's great, and he weaves in a few bars of Scott Joplin's "The Entertainer" for good measure, last heard (by me) in the JGB being done by the great (if very drunk) Nicky Hopkins on 12/31/75. Jerry gets the verses mostly sung, if a little imperfectly (see my rough transcription just below), and this whole thing is just a stone cold fucking delight.

At 4:30, John drops a note of electric bass to signal that he's ready to play, one of his few contributions on this night, in the era when he mostly fluttered around pretty inaudibly.

The song is one of my favorites, a perfect choice for Garcia and Grisman's then-recently-released masterpiece Not For Kids Only (Acoustic Disc ACD-9, 1993), and something Garcia had played since the pre-Dead period (see Jerrybase for the overview). In the GD era (and so the GOTS era) it showed up in the studio around 1975-1976. Jerry played it live 4/10/82a, his only "modern" solo acoustic date, but it was pretty cursory, just two and a half minutes without a good handle on the words, before running into the Cotten tune he did a lot more and in a range of contexts, "Oh Babe, It Ain't No Lie". After this impromptu version eleven years later, it came up twice more in the 1994 Garcia-Grisman live sets before ol' Jer landed at the end ol' Chestnut Street himself.

For more on this tour, the Garcia Band's last out east, see also "The Reedman vs. the Gunslinger at at the Garden" (11/12/93), "Good Clean Fun" (11/14/93), the sweet little BS passes for this "Slack Tour" featuring Church of the SubGenius prophet J.R. "Bob" Dobbs, and take a gander at the crew tourbook.

Listening Notes below the fold.