Lizless Sextet: JGB at the Stanley Theater in Pittsburgh, June 23, 1982 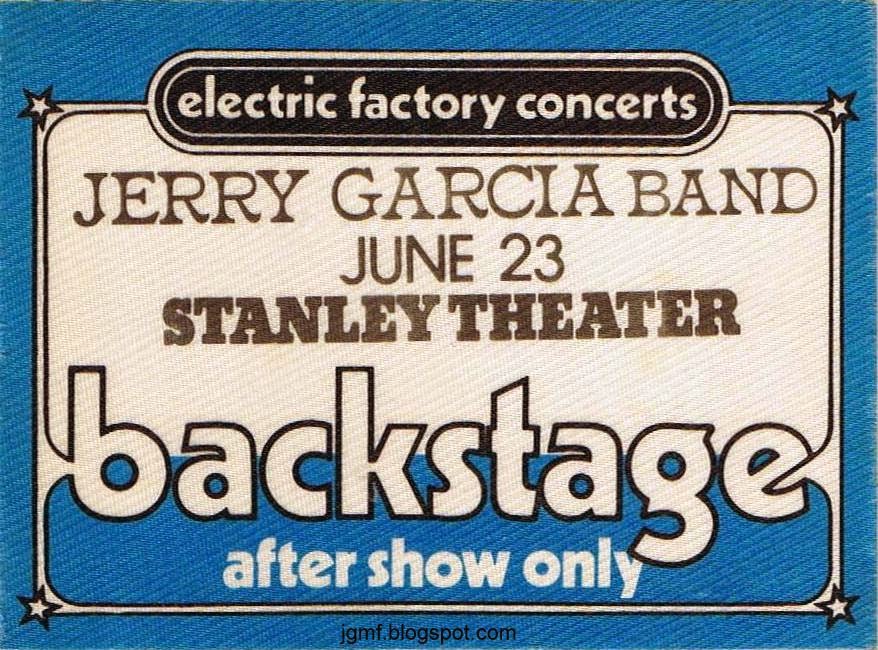 This date interests me because Liz Stires is said to have left the JGB tour after the previous night's gig (6/22/82). So this would be a show with only one backing vocalist (Julie Stafford), a rare JGB sextet with two keyboards (JGB #14d, I have proposed we catalogue it). Truth is, I can't hear from this tape whether there is one vocalist or whether there are two. I plan to put ears on the other partial tape (which looks to complement this tape nicely; concatenated, they should provide the complete show). Anyway, the review (Allison 1982a) seems to say pretty clearly there is a single vocalist, so given the provenance [redacted] of the information that Liz left on 6/22, it's a pretty sure bet she's not here.

Oh, yeah. There's a really outrageous, ripping guitar solo about 8 minutes into Tangled Up In Blue. As I say in  my notes, I bet Garcia was sweating like a greased pig. But it's good stuff.

So, review, then listening notes. 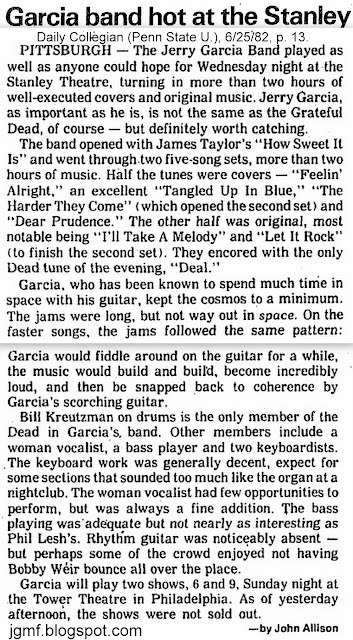 ! personnel: The key historical interest of this show lies in the personnel. This is an odd, fleeting, sextet configuration with Garcia and Kahn (of course), featuring two keyboardists (Melvin Seals on organ and Jimmy Warren on electric piano). Bill Kreutzmann is on drums, which would happen periodically for reasons that are not very clear, but worth thinking through at some point. Yet this is a rare night with only a single backing vocalist (Julie Stafford, as I presently understand things). I think the last time Garcia would have played with a single backup singer (always a "girl singer", as he once referred to Dolly Parton) would probably have been late '77, with Donna Jean Godchaux but without Maria Muldaur. In this instance, there were two backing vocalists for the tour, but Liz Stires left the Garcia Band after the June 22nd show at the Richmond Mosque in Richmond, VA [TJS]. A review in the Penn State Daily Collegian (Allison 1982a) identifies the band personnel (though only Garcia and Kreutzmann by name) as including "a woman vocalist", going on to note that "the woman vocalist had few opportunities to perform, but was always a fine addition." I think this is pretty solid confirmation that there was only one singer, and that, indeed, Liz Stires left the tour a few days early. According to Corry's typology, this should be JGB #14d, which would have done three shows on 6/23/82 and 6/24/82 (early and late).

! setlist: Allison 1982a says "Let It Rock" ended the second set, but he also says that LIR is a Garcia original. This tape runs continuously from the warmup before HTC through the end of LIR, so if LIR was last (before the encore), then HTC was also the penultimate tune.

! historical: see note about personnel. The Allison review (1982a) notes that Garcia will play two shows, at 6 and 9, Sunday night (6/27) at the Tower Theatre in Philly (actually, Upper Darby), and that as of the the 24th tickets were still available. (Note that the Tower show was Garcia/Kahn.)

! R: this is definitely a different recording than the one embodied in shnid-90876, and on a quick listen I think this one is better. I have to check more carefully, but it looks like these tapes will fit nicely together and, hopefully, can be concatenated to provide the complete show.

! R: This is a classic Closet Call tape. It's not great, but it's not bad. Things are a little overloaded, and there's definitely some room feel, but the (unknown) recordist was in a pretty good spot and did a pretty good job. The keyboards and backing vocals are a little washed out, while the bass sounds pretty good. The recordist just left the tape rolling, 45 minutes at a time, by the sound of things, which is really nice.

! R s1t03 ITAM about 7 and a half minutes in there is a real-time blank spot. You can sort of hear the music imprinted underneath it. Maybe someone forgot to pop the tabs on their tapes?
! personnel: s1t06 TUIB I can't tell if I hear two backing vocalists?

! P: s1t06 TUIB Garcia is tearing it up in this TUIB. This is some pretty outrageous guitar. Easily some of his @@ best licks of the year. Solo around 8 minutes into TUIB. Late 8-min mark and forward, just very, very lengthy phrasings, also at blowout intensity and some great raunch. I bet Garcia was sweating like a fucking hog here.

! Disclaimer: This is part of a "Closet Call" project aimed at getting missing Garcia dates into the digital realm. These are "warts and all" ... straight transfers of the source cassettes with editing only of the most offensive tape transitions and such. If you don't like hiss, possible speed problems, etc., etc., then move along. And, to anticipate a FAQ: no, I don't plan on doing 16/44s of these. Thanks to wk for supplying these tapes!


KRON-TV News report from February 3rd 1967 at The Matrix nightclub in San Francisco, at 3138 Fillmore Street. Features views of rock band The Only Alternative & His Other Possibillities rehearsing onstage and an interview with new singer Kay and songwriter Tor Olson. They discuss the difficulty of defining their 'sound' and the creativity of the San Francisco music scene.