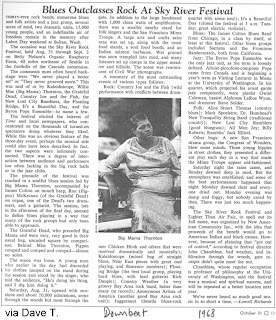 We are very fortunate to have a delightful Charlie Miller board tape of the Grateful Dead's set, which is pretty freaking ferocious, more the fire breathing dragon of May-August than the slightly more controlled unit of the following February. I sure would like to hear the New Lost City Ramblers' set too, though! (Greedy, I know.) Apparently it was a Really Good Time, a financial bust for the organizers (including a philosophy professor from UW, John Chambless, an interesting-sounding guy), and plans were announced to do it again the next year.

Anyway, for GD-oriented people this will be the point of greatest interest: "The pinnacle of the festival was reached in a soulful blues session led by Big Mama Thornton, accompanied by James Cotton on mouth harp, Ron (Pigpen) McKernan (of the Grateful Dead) on organ, one of the Dead's two drummers, and a guitarist." First, I don't know of any other Pigpen sit-ins off-hand ... are there others? Second, one certainly wonders whether the guitarist was Garcia. More like him than Weir, I'd wager, and though it doesn't say a GD guitarist the GD set preceded Big Mama Thornton's to close the festival. So I'd say it's likely Garcia was around (given that Pigpen and a drummer were).

There is certainly a ton more to say about this Festival. I am sure McNally has a lot to say, probably Jackson as well. Accounts are that "the Grateful Dead arrived unscheduled and unexpected" (2). I recall that there was lots of material in the Seattle Helix about the festival ... like page after page after page of reports, band profiles, pictures, art, etc. If I were to have time and inclination to investigate this festival further, that's where I'd start. Since I don't have the time, maybe some intrepid researcher wants to spin through the Helix on the Underground Newspaper microfilm collection. The Helix is a real masterpiece, though the b&w films somehow seem to project salt into the reader's eyes.

Anyway, as is my wont, I mostly wanted to post this great scan about a neat-sounding day. Thanks, Dave!