Feel Your Oats, and Race Back to Eat Them: JGB opening for Frank Zappa, UIC Pavilion, University of Illinois Chicago, August 18, 1984

Last night of the August '84 tour, which was really strong, amazingly strong given the shape Garcia was in. Zappa headlined the ads, but Garcia played second. Not much to write home about, except, on the theme of "oats". 1) Garcia is feeling them in the big guitar tunes CUTS, GOOMLW and Deal. Man - hot-hot-hot stuff, early and often in these tunes. 2) Like a horse racing back to the barn, Garcia sprints the band through the Midnight Moonlight at a really embarrassingly fast tempo. Kemper must have been sore for days trying to keep up. 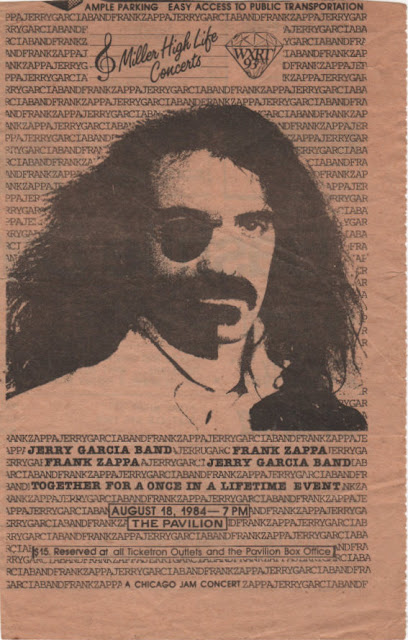 ! JGBP: URL http://jerrygarciasbrokendownpalaces.blogspot.com/2012/12/uic-pavilion-university-of-illinois-525.html. This is a relatively rare example of the JGB playing a venue before the Dead would play it (April 9-10-11, 1987). I am surprised the Dead could still play a 10k seat arena in April 1987, but I guess that was just before "Touch Of Grey" hit it big.

! R: historical: Last night of the August '84 tour which must have made a bundle. FZ recalled "we were the opening act and I didn't see any of his set." Van Matre says the opening / closing slots were determined by a coin flip, with Zappa headlining, and he got the imagery in a Chicago Reader ad. Van Matre likes both of the "aggressively unfashionable" acts, finding Garcia "capable of conjuring up a kind of sweet, stoned, meandering magic with his music that has lasting appeal".

! misc: Zappa setlist: Zoot Allures, More Trouble Every Day, Penguin In Bondage, Hot Plate Heaven At The Green Hotel, City Of Tiny Lights, You Are What You Is, Mudd Club, The Meek Shall Inherit Nothing, Dumb All Over, He's So Gay, Bobby Brown, Keep It Greasey, Honey Don't You Want A Man Like Me?, Carol You Fool, Chana In De Bushwop, Let's Move To Cleveland, Cosmik Debris, Sharleena, Ride My Face To Chicago, The Illinois Enema Bandit. via http://etreedb.org/lookup_show.php?shows_key=54581.

! R: seeder notes: - Thanks to Michael Hessberg for the Master Cassette source - Thanks to Charlie Miller for the transfer and coordinating this effort - Thanks to Brian O'Connell for the shnid8415 Nakamichi 100 source which supplies the first 1:15 of "Cats Under The Stars", some crowd and the first few notes of "Gomorrah" (0:09 total), as well as some crowd and first few notes of "Midnight Moonlight" (0:15 total) - Thanks to Joe B. Jones for his assistance with the pitch correction. Mastered by Scott Clugston, December 2019.

! P: t01 CUTS Garcia's first guitar turn late 2 already has some great fuzz. He had flubbed lyrics and sounded listless vocally, but here the guitar goes straight to the good stuff, no dicking around.

! P: t06 Mid Moon: I can nearly taste the oats from Garcia's feedbag as he gallops to the barn. Embarrassingly sped up.

! P: t07 Deal fucks up verse goes right to "hate to leave you sitting there composin' lonesome blues". It's a fine, if misplaced, sentiment. Notwithstanding this, Deal is very hot, as you would expect. Very hot.

I love love love the mid-1976 versions of "After Midnight", with Donna seconding on "what it is all about". (Happy 73rd birthday to DJG the day of this post, BTW!) I also like the "Stop That Train"s from this era, both imprinted on my brain from some tape I played the hell out of. This show, Monday 8/16/76 at Keystone, is solid. Maria Muldaur harmonizes some in "Ride Mighty High", this now being her earliest verified (by me) appearance with the Garcia Band (next known to me is 9/12/76). 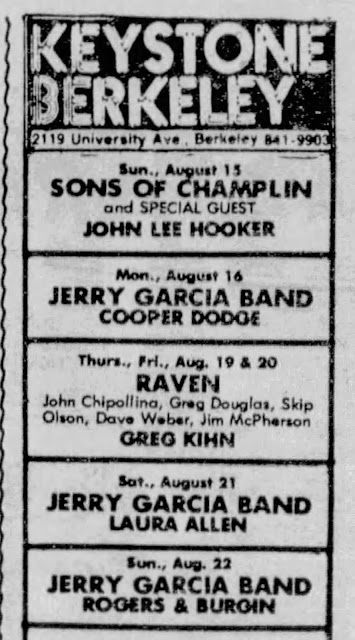 I had thought of naming the post "Do Me A Favor? Open the Door and Let 'Em In", imaging McCartneyesque Jesus to Gabriel after 17 syrupy minutes of JGB "Knockin' On Heaven's Door". I have a rule, induced after listening to 3/12/76: any version of ‘Knockin’ On Heaven’s Door’ exceeding 17 minutes in length is too long. But I didn't think that set the right tone for a post about a show which I enjoy, despite the serious issues with this particular warbling tape.

! R: hissy, running fast, with lots and lots of warble, especially in KOHD, TWYDTTYD, & MITR (especially, especially the last one.

! P: s1t06 KOHD this version violates my red-line rule, first articulated in connection with 3/12/76, that "any version of ‘Knockin’ On Heaven’s Door’ exceeding 17 minutes in length is too long". And Jesus to Gabriel, pace Paul McCartney and Wings: "Do me a favor - open the door and let 'em in."

! s2t01 at the wind-down of MITR, it sure sounds like Keith is noodling around with the chords of "Positively 4th Street", but maybe I am hearing things.

! P: s2t04 ASM very slow and gentle to start, but Donna really oversings as it develops.

We have pushed a lot of new studio sessions (a subset of "private" musical activities" which also include rehearsals, private events, etc.) to Jerrybase. They appear in blue in your search results.

There is lots of info here that you didn't know. For example, take a look at 1978, and see a few jazz standards you may not have known were played in this period by Keith, Jerry and John in their little "hot jazz" combo thing. I am super proud of having gathered up this information, which sheds new light. It's dramatically incomplete, it mostly covers the 1970s, but most of it has not been systematically documented until now.

Thanks to the amazing m0thra for his generous time and programming skills in getting this stuff presented!

I don't do a lot of Weir talk

But man, I do love this guy. We are such fortunate fans to have such smart and literate artists in our lives!
Quote from a recent interview about his songwriting, which I recommend. One bigger point, one smaller point.

I take the dream seriously. That’s all I can say. They’re very real. It’s not just brain chatter. There’s chatter involved in your daily thinking, that’s all. But you know how people say it’s just a dream, it’s just a dream. There is no such thing. Dreams are every bit as real as any other part of your body.
Getting in touch with that, being in touch with that dream world, is a lifelong pursuit. As you’re younger, you can train yourself to get better at it as you get older. Not just for art, but for any sort of endeavor. There’s a lot that dreams can tell you.