Does anyone know the story of the end of the Family Dog, and the re-emergence of 660 Great Highway as Friends and Relations Hall? I am sure it's out there, but I don't recall seeing it and I know nothing other than what I see in the listings.

I am presently going through some ca. 1970-1971 listings and find first reference to "Friends and Relations Hall" for March 12, 1971 (Big Brother). I had found listings as Family Dog through scattered through December 1970 (not listed at the Chicken).

Anyway, what's the story? I have been surprised to see nothing reported (as far as I have found) in the various music columns in the Bay Area papers. 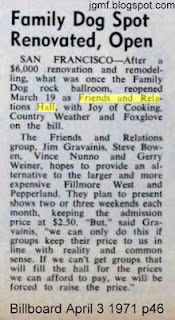 Do any of you venuologists (or anyone else) have any ideas about how best to codify the geospatial data attached to the locations we love?

So let's say, hypothetically, I have a giant spreadsheet full of concerts and such. There are pretty well coded temporal data. For many of the events of interest, I have address, city, state and zip.

What's the best, quickest, and most fungible way to code in geospatial data? I guess I am thinking GPS coordinates.

Ultimately, I am interested in street addresses. But since some of them may no longer exist, it seems to me that some kind of geospatial coding is preferable. But I am worried that on my very first look at this, I get the kind of result above, one which could really mess me up.

Email ThisBlogThis!Share to TwitterShare to FacebookShare to Pinterest
Labels: methodology

I always loved the "Calebration" thing dated 8/30/70. My favorite Candyman, a really great Easy Wind. There's also video out and about that gives a very rare glimpse of the GD of this period (though, I do wonder if that QMS video has made it into the world?).

But, I think the set we know was not actually recorded on August 30, 1970. John L. Wasserman's August 28, 1970 "On the Town" column in the San Francisco Chronicle --he had replaced Ralph J. Gleason in that space on June 15, 1970, when Gleason left his regular column at the Chron for a desk at Fantasy Records-- says that various bands' sets "have been taped" (1). So this material is from sometime prior to 8/28/70, and was broadcast on August 30th. 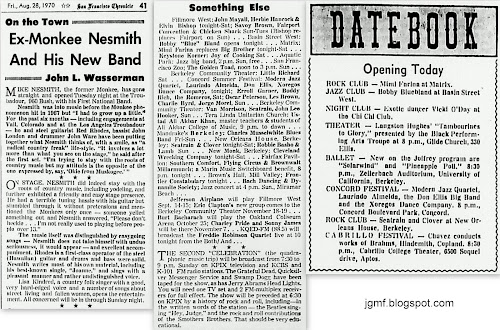 For The Record, and all that.

Does anyone know a list of John Scher-promoted concerts?

I thought, one day, while I'm at it, why don't I systematically start coding in PROMOTERs? Yeah, that won't take long!

So, having more or less finished coding Jefferson Airplane through 1969, I have taken to coding promoters for them and all of the Garcia stuff, at least i nthe Bay Area. All of this to check a point about the comparison of GD and JA business crossings with Helms/FD and Bill Graham (think of a 2x2 table ... I want the frequencies in the cells, and basically want to do a t-test.)

Thanks to Ross, I have been able to code Bill Graham in, in a rough way. The Family Dog stuff is easy enough, as will be the Herrera stuff.

So, while I am at it, I thought another day, why don't I code Scher? Be good prosopographical practice, says I.

So, I need a list of all John Scher -promoted concerts, at least those involving GD/Garcia. Preferably in Excel format. :)

Moyssi's site, besides containing a huge number of terrific scans of program covers, has a "Complete list of Capitol Concerts 1971-1984 — Compiled by John Goodfellow. Great work, and thank you, gentlemen! (A complete set of Garcia/GD-relevant programs for my archive/museum would be gratefully received!)

And, for our enjoyment, here's a non-Capitol program cover, from the JGB show 7/26/80 at the Convention Hall in Asbury Park, NJ, a "John Scher Presents on the Boardwalk" promotion: