update: the original title of this was "First Night Out", but I have discovered a warmup gig on 6/24/81 at the Keystone Palo Alto (not in Salinas, as I had elaborately laid out).

Liz Stires and Essra Mohawk appear to debut as backing vocalists on the night before this show. There are no singers on the late May shows, then there are here and the next night. One presumes that the 6/24/81 Palo Alto gig was a warmup: off-night, if not quite off the beaten path. 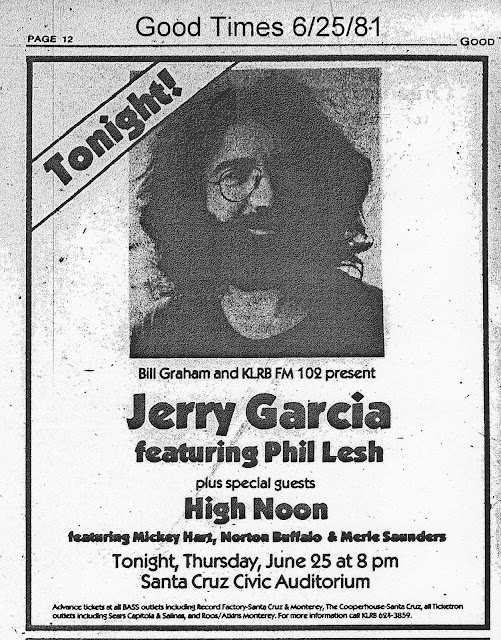 Phil Lesh sits in while John Kahn travels Europe with his mom. Merle [sic] Saunders sits in for the first two tunes - his last sit-in with Garcia On The Side, I do believe.

The only other non-musical thing I'd note was the GD-centric billing in the preview entitled "Night of the Dead". This was uncommon, and for years the standard Garcia Band contract rider prohibited any trading on the name Grateful Dead or on Garcia's association with that band. With Mickey Hart a key principal in the opening band, High Noon, and Phil joining Jerry, this night seems to have permitted of an exception. It's almost like the "Grateful Dead Three Ways" framing around the December 1975 Kingfish, JGB and Keith and Donna Band gigs.

Musically, I like it. Phil sounds good, I really liked "I'll Take A Melody" and "Simple Twist Of Fate".

! Recording: symbols: % = recording discontinuity; / = clipped song; // = cut song; ... = fade in/out; # = truncated timing; [m:ss] = recorded event time. The recorded event time immediately after the song or item name is an attempt at getting the "real" time of the event. So, a timing of [m:ss] right after a song title is an attempt to say how long the song really was, as represented on this recording.
! Jerrybase: https://jerrybase.com/events/19810625-01

! R: this is a great pull! Drums are super-punchy. What a tape!

! personnel: Definitely two keys plus two backup singers. I presume that Merl was playing Melvin's Hammond on the tunes that list him, and that Melvin was sitting out. I probably wouldn't be able to hear three keyboards at once, anyway.

! P: Phil is pretty hot and heavy for Miss Moon and TUIB. BTW, earlier in the set an audience member mentions him by name, lest there be any doubt that Lesh is in the house.

Man, this is a great Bird Song.

The "Tighten Up" jam has always been a favorite. I am partial to the 1/2/70 and 10/31/71 versions, always wondered where the heck that last one came from since it's so well-developed while not having been played in well over a year (and never before with Keith, AFAIK).

Just here to note that the wonderful jam out of the wonderful 7/17/76 Comes A Time has a little Tighten Up feel to my ears. It never really lands on it, but it sure sounds similar. Very nice.

Somehow, I had never pinned down in my mind that Jerry played none of his original tunes before the advent of the Jerry Garcia Band in 1975. Pure covers before then. Hm.