Garcia and Saunders mostly played Bay Area clubs. But every now and then, usually in connection with multiact benefit concerts, they played larger theaters, auditoriums and arenas. Examples include BCT for the United Farmworkers on 9/22/72, Winterland for unspecified Hells Angels on 10/2/73, and BCT again for Ethiopian famine relief (8/23/74) and, on 10/12/74, for Padma Jong, a performing arts center on the Eel River.

Two that seem likely to have happened, but which have yielded zero expost trace took place on June 2, 1973 at the Marin Civic and on June 15, 1975 at the SF Civic. The first, especially, has always drawn me, because JGMS shared the bill with the brand-new Pointer Sisters and a Herbie Hancock aggregation transitioning from its Mwandishi to its Headhunter periods. Given the chance, I'd be awfully tempted to set my time machine back to this night to check out the action.

Let me just briefly drop some breadcrumbs on each.

An organization called Sausalito Is Spring organized three shows June 1-3, landing some major talent. The Saturday, June 2 gig was a benefit for the autistic classroom of the Henry C. Hall Elementary School in Larkspur, with the killer bill identified above. I have gathered up the following ex ante materials:

The 5/31 ad in the Examiners bills "Jerry Garcia & Merle [sic] Saunders," with Pamela Polland following in the same font, and then the Pointers and Herbie Hancock in smaller print.

Did this gig happen? Was anybody there? Was Gaylord Birch drumming for the Pointer Sisters? Did the Headhunters do what I imagine they must have, which would be drop down some deep, thick, funky fusion?

It was a benefit for the Community Fairs Broadcast Foundation. Wasserman 19750817 doesn't mention JGMS, leading with CJ, and says the whole event was put on by amateurs and was an unmitigated disaster - BASS sold only 227 tickets. Since JLW didn't mention JGMS, I have some doubt as to whether they played. update: Selvin 19750622 gives a similar ex post analysis: 800-1200 "customers rambled about in the 7,000-plus seat hall" and the charitable beneficiary lost a ton of money. He doesn't exactly say he saw Garcia and Saunders playing, but if they hadn't shown I think he or JLW would have said so.

I reproduce my extremely low-res scan of a flier below. 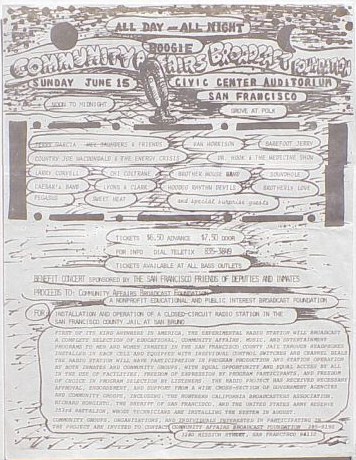 Book on Nightstand at Serenity Knolls

I thought I remember that one of the big Garcia/GD auctions of some years back offered a copy of the book that was found on Jerry's nightstand at Serenity Knolls. Does that ring a bell for anyone? Anyone remember what book it was?
Posted by JGMF at 11:33 2 comments:

John Cutler taped these shows from February 20-21, 1975, and they are now up for official release. Wow!

Cryptdev saw one of these shows. 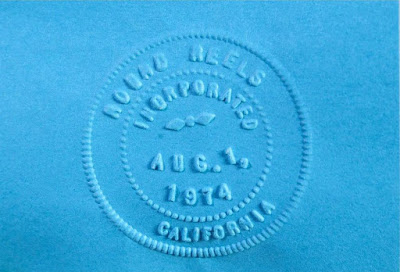 Round Reels is the company Ron Rakow created for film projects, not least the Grateful Dead Movie. As with many of Rakow's business activities, it's really hard to find any solid information about the company. So when the corporate stamp came up for auction over the summer, I was very excited to see it! This image was associated with the auction, but I guess the seal was pulled under threat of legal action, or at least in light of legal questions.

August 1, 1974. Happy Birthday, Jerry! I have always held that Garcia made the decision to Hiatus right in this time frame, August 1974. I imagine that The Movie, and thus Round Reels, was bound up with the Hiatus. If that's right, then the decision would have been at least a little bit before August. It could have been even earlier, but I don't think so. Thoughts?
Posted by JGMF at 12:28 3 comments: