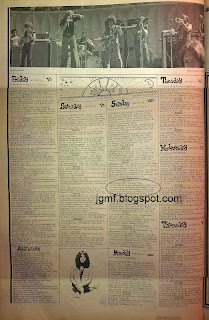 Here are the listings from the great San Francisco Express Times, vol. 2 no. 32 (August 21, 1969), p. unk. There's lots of interest here, of course. But I have circled the item that interests me most greatly. It's under the listings for Sunday, August 24, 1969, and reads as follows:


"Hippy Hill", a.k.a. Hippie Hill, is apparently at the far eastern edge of Golden Gate Park, close to the entry from the Haight-Ashbury neighborhood. It seems like a perfectly good place to go share a sacrament and a free show by the Dead.

The Grateful Dead List traditionally shows the GD at Paradise Valley Resort, Squamish, BC, at the Vancouver Pop Festival [dead.net | deadlists]. There is a handbill, but I have never seen any eyewitness or other accounts of the GD's performance. This listing makes much sense given the band's presence in the Northwest (Bullfrog Festival in Oregon on 8/23/69).

That said, I find the listing in the Express Times to have a lot of verisimilitude. I have been reading a lot of stuff from ca. August 1969 around The Common and the Wild West Festival. The Dead doing a free gig in the Park makes sense in the context of all the shit that was going down, about which I will be writing, soon. 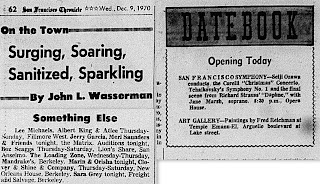 So, the Grateful Dead and the Riders are on tour, playing a wild-ass Hell's Angels party at the Anderson Theatre in NYC on Monday, November 23rd, and Garcia plays a hometown gig with his old buddies David Nelson and Marmaduke, probably Dave Torbert on bass. Corry has covered the early history of the NRPS bassists beautifully (see also earlier). But the late history of the NRPS is not perfectly clear to me, and in any case this new listing might be worth thinking about in this context.

Mickey Hart's Departure From the New Riders of the Purple Sage

I know there are probably bits and pieces around about this, but I do not have my materials handy. (I'll look forward to your sources and sourced recommendations in the comments!) Corry's "New Riders Of The Purple Sage Personnel 1969-1981" tells me that the NRPS #2 configuration of Dawson-Nelson-Garcia-Torbert Hart ran from 4/17/70 through 11/29/70, the latter opening for the Grateful Dead at the Agora Theatre in Cleveland, OH. NRPS #3, with Dryden replacing Hart, kicks off on 12/12/70 (opening for the GD at the Sonoma County Fairgrounds in hometown Santa Rosa). This is the configuration with which Jerry would finish his run with the Riders, opening for himself one last time at the Taft Auditorium in Cincinnati, OH, on Halloween night, October 31, 1971.

So this new listing for 11/25/70 would be Hart's third-from-final show with the NRPS, on current knowledge, followed only by the opener for the GD at the Syndrome in Chicago on 11/27 and the Agora set. But what do we know about Mickey's departure from the NRPS? Corry notes that "Mickey Hart had become increasingly distraught after his father Lenny had nearly bankrupted the Grateful Dead. He left the New Riders after their November tour, and the Dead in February of 1971." I assume the linkage of the emotional wreckage from Lenny and the NRPS departure is a good one to make, and for some reason this new listing, the night before Thanksgiving 1970, puts me in mind of the tinge of sadness that seems to accompany certain Bay Area Thanksgivings. If you are alone and already sad and feeling blue, if it's cloudy and cold and wet, that could be a tough time. So, while I obviously can't conjecture too might about the emotional color of 11/25/70 at the Keystone Korner, by gut feeling is that it was far from a rainbows-and-unicorns affair.

That said, it might've been mighty nice, too. Hang around, play some country music, have a few beers. Are we not still men?

Caveat/wild speculation: do we really know Mickey was there, and that this wasn’t a warmup for Spencer Dryden? Hmm??
Jerry and Freddie

Anyway, as we know, before Fred started up in Berkeley there was his place in North Beach, the Keystone Korner (so named because it stood kitty-corner from a police station), which is right up there with the Matrix in The Lore. And I believe this is the first known gig there, and the first known with Fred Herrera. Fun stuff!

Caveat/weird observation: My next listed Garcia-Herrera crossing is April 1, 1971, at Keystone Korner. Six months is a long time between encounters. I wonder if Freddie and Jerry did actually meet, or even do business, on this 11/25/70? I was pretty sure Herrera had the club from 1969. But six months is a long time. I’d love to hear the specifics of all this (note to self).

Found this interesting. One thing I think we have learned is that, perhaps contrary to assumptions over the years, Garcia came home to the Bay Area whenever there were a few days between GD shows when they were on tour. At least, that's how I read the evidence from ca. 1970.

As a result, the listing above for Jerry Garcia and Merl Saunders and Friends at the Matrix on Monday, October 19, 1970 is not that surprising. Jerry probably did come home between the GD show in Minneapolis on October 17 and in DC on October 23.

What struck me about the above was the concurrent listing for the "Merle [sic] Saunders Trio" at El Matador on the same October 19th date. That the copy editors missed this is one thing (contradictions are fun!). More interesting to me is that Merl was probably hedging his bets: it's entirely possible that there had been GD shows planned between 10/17 and 10/23, and that they fell through. If he had been expecting Jerry to be out of town, Merl would have had to work without his relatively new partner. We don't know much about what this might have been (e.g., who were the other two players?), but I just thought it was interesting enough to post (but not so interesting that I write a dissertation about it).
Posted by Fate Music at 22:36 10 comments: