Last weekend's post "On the Bus with the Garcia Band" looked at the November-December 1983 JGB tour's extensive ground travel - everything was by bus, 3,000 miles on the road in a few weeks in the eastern time zone. Commenter Nick asked a great question comparing that tour with earlier ones, pointing out Ozzie Ahlers's recollections of limos and such on the early 1980 tour. In comments, I noted that that one had been a multimodal affair:

Nick raises the question of whether the later tour maybe just wasn't generating the same amount of cash, so that the bus was a budget-conscious choice. (Corry offers an alternative hypothesis.)

I'd love to be able to compare the money on the two tours, but I lack the '83 piece. I can lay out the '80 piece, and it is quite impressive. Somewhere I have Dennis McNally calling the Garcia Band a "little cash cow", and the numbers affirm.
In 2015 dollars, that's just over $571k for three weeks' work, not bad.

The last column may also be of interest. $19k (1980$) cash out on the road would have bought Our Hero a lot of cigarettes and chili dogs.

On the Bus with the Garcia Band

I was going through the tour documents for the Jerry Garcia Band's November-December 1983 tour, which was unusually long. I haven't compared the various JGB tours, but this one and/or the late '77 tour are the two longest I can think of, without double checking. 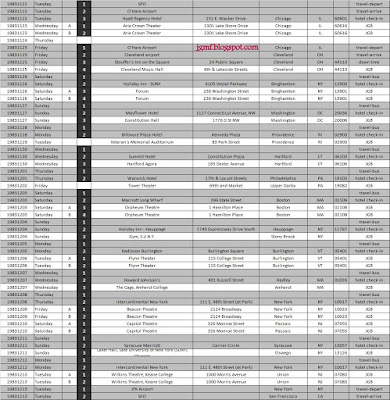 I have more documents from the 70s than the 80s, so I don't know how uncommon this was in the latter decade, but I note that the big middle of the tour involved lots of overnight bus trips, something I have never picked up for any other tour. 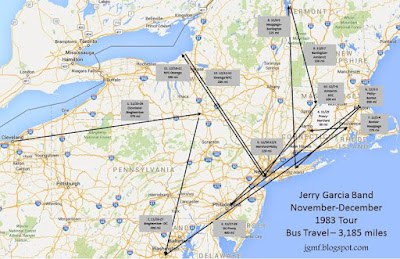 The above is a rough map of the tour once the road tripping started, from Cleveland forward. (They had played 11/23 in Chicago and had Thanksgiving Day off, flying on Friday 11/25 to Cleveland.) I figure almost 3,200 miles on the bus, most of them (in the grey-shaded boxes) overnight from the previous night's show. So, on Friday, 12/2 they played the Tower in Upper Darby (outside of Philly), presumably ending rather late (they were wont to do that), hopped a bus for 300 overnight miles to Boston, played two shows, and hopped another bus 275 miles to Long Island, gigged at SUNY Stony Brook, and did 325 miles up to Vermont right after that show, enjoying a much-needed night off on Monday 12/5. What a hectic touring pace!

Again, this strikes me as exceptionally uncommon. They must have been in dire financial straits, or maybe it just seemed like a good idea at the time. I can't imagine how that bus must have smelled, nor do I wish to try.

p.s. DeeDee Dickerson is on the tour documents. This confirms irrefutably what I found on an ad from the tour a while back, i.e., that she was still with the band at this point, and didn't end her stint with the JGB in summer '83 as has been previously understood.
Posted by JGMF at 19:11 7 comments:

Sounds like a winner!
Posted by JGMF at 08:57 No comments:

The Grateful Dead played a legendary gig at the Sound Storm festival on Mrs. Irene York's farm near Poynette, Wisconsin on April 26, 1970. As ever, Corry is on the case, as is LIA over at Deadsources.

I have a couple of obscure followups.

First, three years after the fact, a program called "Studio None" on cable channel 4 in Madison apparently broadcast footage of the Dead and Baby Huey from the gig. The listing refers to "the 1969 Poynette Rock Festival", but I think this must be 4/26/70. Mmmm ... wonder where that tape might be? (! listing: Wisconsin State Journal, November 26, 1973, sec. 3, p. 3.)

Second, the Little Brothers of the Poor, a lay group from Milwaukee, asked the Columbia County Board for permission to host a "Festival of Christ" on the York Farm August 6-8, 1971, expressing hope that Joe Cocker and the Dead might perform. Seems unusual entertainment for a religious festival planned to include prayer and meditation, with prospective participation by evangelist Billy Graham and Catholic Bishop Fulton J. Sheen, but Jesus Freaks will Jesus Freak, I guess. (! ref: "Charity May Hold Poynette Rock Fest," Capital Times, April 24, 1971, p. 13.)

Third, Sound Storm '72 happened in August of that year. The promoter accused advertised headliners the Grateful Dead of backing out of agreement to play the Festival, which the Dead denied, with Gail Hellund telling local radio stations and newspapers that they had never accepted Don Bobo's offer to play the gig. (! ref: Cosgrove, Howard. 1972a. Rock Fair Set to Swing. Capital Times, August 3, 29; ! ref: Cosgrove, Howard. 1972b. Poynette 'Rock Fair' Falls Apart. Capital Times, August 10, 27.)
Posted by JGMF at 11:38 2 comments:

Great write up, wet your whistle for the forthcoming Dave's Pick.
Posted by JGMF at 11:05 No comments: