The Jerry Site has listings for Jerry Garcia and Merl Saunders at Keystone, Berkeley, on July 21 and July 22, 1974. I doubt both date/venue combinations, for reasons I'll lay out below.

This first date is so obviously spurious that it barely bears laying out, but in the interests of completeness I'll do it anyway.

1) The GD played the Hollywood Bowl this date. Depending on show times both would be possible, but this seems extremely unlikely on its face.
2) Keystone billed Moby Grape and Earthquake on Sunday, 7/21, as evidenced by a Scenedrome listing in the Berkeley Barb: 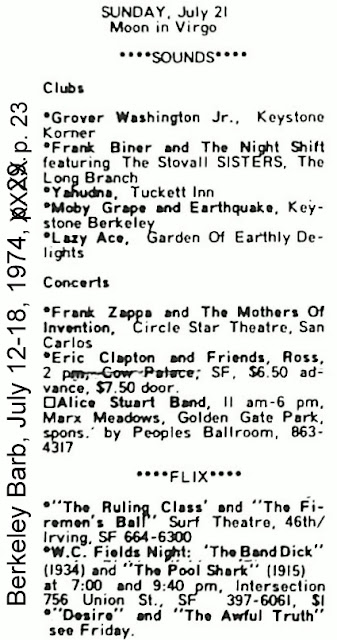 3) The recording, which is high (Betty-Board) quality but only in light circulation, contains two versions of "When I Die".


Regarding "7/21/74", I therefore conclude that this date was attached to some Betty Board snippets merely as an anchor (i.e., for ease of identification). When/where the material is actually from is anybody's guess (and I'll take a flyer below).

This may be the tougher case, since there is a quite delicious Betty Board (e.g., shnid 86198) in long circulation. (If you don't have it, get thee to the to your favorite Bit Torrent site forthwith!) The tape is notable for an as-yet untitled standard that starts things off, as well as the only-known (to me) JGMS version of Cucumber Slumber.

However, there is some reason to doubt this date/venue combination.

1) Saunders and Fierro appear to have been billed at the Sand Dunes bar on this Monday night: 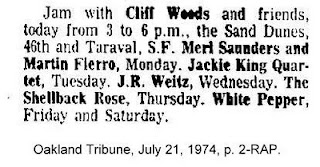 I have posted about the Sand Dunes and the fact that Merl and Martin were playing there on Monday nights, with Jerry's at-least occasional participation. It seems likely that all three of them were at the edge of the Western World (i.e., the far western Sunset District of SF) on 7/22.

2) The bassist on these tapes is confirmed to be Tony Saunders. Tony Saunders played in his father Merl's bands at the Sand Dunes and The Generosity.

3) Keystone Berkeley's listing in the Hayward Daily Review, July 19, 1974, p. 36, bills Nite Shift and audition bands. Now, this could easily be moved for a Garcia appearance, I am sure, but it's just another strike against a JGMS show at Keystone Berkeley on this night.

4) As the Jerry Site notes, in remarks added by slip and seemingly attributed to 'strumminsix,' the recording features "Boogie On Reggae Woman" from Stevie Wonder's Fullfillingness' First Finale, which was apparently released on July 22, 1974. Now, it wouldn't shock me that Merl and/or John might run down to the record store first thing and get the new Stevie Wonder album. But I'd be slightly more surprised if the band could have absorbed it enough to play it that night. This leads me to question whether the circulating material dated as 7/22 is actually from that date.

5) Finally, reinforcing these doubts just expressed, the newest iteration of this "7/22/74" material (again, shnid 86198), may not be all from one performance. This would have to be checked more carefully than I am able to do, i.e., in listening for source changes in the recording, but it's a possibility that joins with all the others to raise some doubts.

Putting things together this way reveals a tantalizing possibility: maybe all of this material is actually from the Sand Dunes from around this time (e.g., 7/21/74)? Everything we have, including a tape label the dating of which coincides with a brief flurry of Martin-related items in the Oakland Tribune, and includes Tony Saunders, who played in the band at the Sand Dunes.

Alternatively, maybe it's from The Generosity. The newly polished/circulated Castelli tapes from 2/14/75 (shnid 108896) and 5/9/75 (May 9th) (shnid 107829) reveal some things in common with these "1974" tapes, the appearances of "When I Die" and other seemingly-very-rare instrumentals (Cucumber Slumber, What's Going On, and the unidentified tunes) being most prominent. [Note added 20111216:  These song selections are only unusual if this is actually JGMS, which it almost certainly isn't. This may have been the standard Monday night set for the Merl Saunders/Martin Fierro outfit at the Sand Dunes, or Aunt Monk at The Generosity! Tony Saunders played bass in both outfits, and he is present here.] The possibility identified in point B4 above, that BORW might need to be from later than 7/22/74, could be seen as reinforcing this possibility.

If forced to bet I'd say that both of these tapes are approximately-correctly-dated performances of the Merl Saunders-Martin Fierro group --Saunders, Fierro, Garcia, Tony Saunders, and an undetermined drummer-- at the Sand Dunes, 3599 Taraval Street in the Sunset District of San Francisco, CA, 94116.

And, regardless of all of this, I highly recommend all of these recordings to you. They're awesome and show Jerry playing amazing, unfamiliar material when he is truly at the top of his game. Two snaps up.
Posted by JGMF at 12:01 12 comments:

Jerry Garcia and Round Records

(Parenthetically, the Grateful Dead Archives at UC Santa Cruz will eventually, hopefully, allow us to get a great close look at some of these hitherto opaque business/economic issues. Go, Nick, Go! But I pregress.)

I have just been eyeballing some articles that appeared in the amazing, incredible, Golden Road, edited by Blair Jackson and Regan McMahon. I think I just peeled the onion back to a really important issue to which I have, until now, paid too little attention, and that's the issue of Round Records (RR). I just want to make a brief comment here. Steve Brown had a great piece from the perspective of the GD Record company in the Summer 1986 issue (1) with the following tidbit.

Despite their reputation as a group of guys who liked to take risks, Rakow and the Dead decided that rather than jeopardize Grateful Dead Records, which was co-owned by all the voting members of the organization, they would create a second label to handle the more financially dubious solo projects members of the Dead were interested in pursuing. Thus was born Round Records, owned 50/50 by Garcia and Rakow.

First, I think it’s great evidence of the extent to which Garcia was the firmest (only?) supporter of Rakow in the group. As we know with hindsight, this was a devastatingly bad piece of character judgment on Jerry’s part. Neither his first nor his last, but certainly one of the most consequential.

Second, having his own finances tied directly to the fate of the record company might have given Jerry the incentive to put his own name on his band, eventually to professionalize it. As someone who has puzzled a lot over the question of why Garcia would put his name on his band, if he was after a bit of anonymous gigging –a premise almost certainly true of most of the early and some of the later GOTS stuff—this helps clarify the probable reason. No-one else’s records were going to make money, so he needed to make sure that at least his stuff did as well as possible, since that’s basically what would finance Round. Business drove the decision. How mundane, I know. But worth noting about a guy who tried and failed, as so many did, to live outside of all of that.

Third, it really speaks to how committed Jerry was to the other GD members, the Family, etc. He was not only subsidizing their solo projects (did anyone really think that Diga or Seastones or Keith and Donna would sell?), but also taking on disproportionate risk. While he had a tendency to leave women and side band members (except John Kahn) high and dry, Garcia jumped two feet in in committing to his GD bandmates (and, beyond the scope, John Kahn). True, they backed him with the Albatross of the Movie, but Jerry was pretty much carrying everyone and everything. We know this. Yet he is often condemned for irresponsibility (and often, to be sure, demonstrated it) in his personal relationships. Here's a thought: maybe carrying that many others is about as much as we might expect of anybody …

I know everyone knows all of this, but I thought I'd put it out there. And remind myself that I have a lot to learn about Round Records.

update 20140907: June 12 was Lion's Share, June 13-14 was Keystone Berkeley. This post mostly deals with stuff that has been clarified by Elwood (1974), but there's still some good analysis of things other than date/venue in the old text /update

The Great American String/Music Band is one of my favorite Garcia-involved aggregations. It was short-lived by almost any measure, but especially insofar as Garcia’s involvement was concerned. By the latter yardstick, it lasted barely three months. It is still shrouded in some degree of mystery, even regarding fundamentals such as the precise name at various points in time. I have read and thought a lot about that issue, but it’s too convoluted (and still too unclear) for me to post about here – that’ll be a future post. It was a watershed group (along with closely-related Muleskinner) in terms of David Grisman’s musical development, representing, gross modo, the pivot that would turn him decisively toward “Dawg Music” over the next several years. In that sense, I think it’s important more generally in any account of the development of various American musical forms, especially bluegrass.

So, I’ll have a lot to say about GASB/GAMB at some point. For now, putting the cart before the horse, I just want to comment on the dating of two of the shows that circulate, going under the dates of June 12-13, 1974, from the Keystone in Berkeley.

We have three tapes that circulate with these two dates:

I believe that there were three shows in this time period: June 12th at the Lion’s Share in San Anselmo and June 13-14 at Keystone, Berkeley [ed: correct!]. I have no idea what the tapes actually portray. In an optimistic vein, I might conjecture that all three of these dates are represented on the tapes we have, but there's no evidence to that effect.

Let me start with the question of the tapes first.

The key to thinking we have three dates represented here, and not just two, resides in tape #2. I think this is actually two separate shows, based on the following:

These could, of course, be early and late shows from the same date. However, I am not aware of any other early/late billings at either the Lion’s Share or the Keystone Berkeley around this time, so I am inclined to think these are two separate dates. Tapes #s 1 and 3 are the same show, but whatever its date this show is distinct from the two shows I think are present on tape #2. In brief, I think we have three distinct shows represented on these tapes: the one identified as set I of 6/12/74 on the sbd tape; the one identified as set II of 6/12/74 on the sbd tape; and the one that is available to us through both an aud copy and a sbd copy, respectively dated 6/12 and 6/13/74.

In my current state of thinking, I imagine that one of these sets is from the Lion’s Share on June 12, and one each is from the Keystone on June 13 and 14, respectively. I wouldn’t hazard which might be which, and this particular attribute goes way beyond what the evidence rightfully allows.