Dawn of the NRPS

I am sure you have already pre-ordered, as I just did, but just in case, here's link to the upcoming Owsley Stanley Foundation (OSF) release called "Dawn of the New Riders of the Purple Sage". I cannot freaking wait to hear this!

Having just posted on Janis's wake, which is said to have taken place on 10/26/70, I find myself wanting to at least take a stand on a few other gigs which have left me a little befuddled over the years. 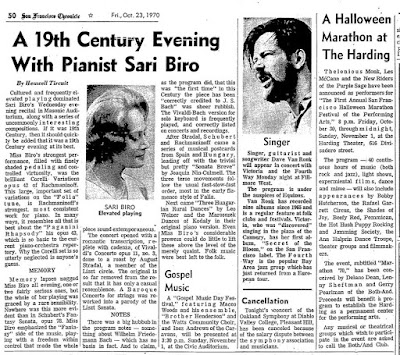 The first involves a "First Annual San Francisco Halloween Marathon Festival of the Performing Arts", running 8 PM Friday 10/30/70 through midnight Sunday, 11/1/70 at the Harding Theater. Among the artists scheduled to appear during the 40 continuous hours of music we find Thelonious Monk, Les McCann, NRPS, Bobby Hutcherson, the Rafael Garrett Circus, Shades of Joy, Beefy Red, Pemmican, the Hot Hush Puppy Rocking and Jamming Society, the Ann Halprin Dance Troupe, theater groups and filmmakers. Subtitled "Marathon '70", the event was put together by Delano Dean, Lenny Sheftman and Gerry Pearlman of the Both-And, with proceeds going toward establishment of the Harding as an ongoing center for the performing arts.

Wasserman wrote the event up in general terms on 11/4/70, though he didn't mention the New Riders. Let's assume they performed as advertised. Since they were in Stony Brook on 10/30 and 10/31, I list this as a NRPS gig on 11/1/70 at the Harding. I guess I have already written this up, so you can just consider this pinned in my own data, and enjoy the above snippet of the Chron.

The second is also at the Harding, and comes from a listing I found once the digital Examiner came to my attention. From that entry: "11/2/70 (Monday): Jerry Garcia / BBHC / Ice / Cleveland Wrecking Company. Harding Theater. Benefit for A Learning Place. I don't know if this would have been NRPS or JGMS; I am listing as JGMS for no particular reason."

So, another benefit, same building, the next night. Odd, but, OK.

As a final point, I'd just note that this timeframe really shines a light both on how much our boy liked to play, and on how ready he was to fly back home between gigs in other time zones, when logistics might suggest he not do so.

October 10-12, he does three gigs in New York and Jersey, then flies home to play the Matrix for two nights, before flying back to Philly for a gig on the 16th. Then Cleveland and Minneapolis, back home to the Matrix, three nights off before gigs in DC and St. Louis on 10/23-24. Home for Janis's wake, two nights in Stony Brook, home for these two benefit gigs and, on November 3rd, a session with Crosby at Heider's as well as a Matrix gig, Heider's again on the 4th, then playing somewhere in the state of New York every night (often Dead and New Riders, sometimes two shows a night) from the 5th through the 16th (less a canceled show on 11/15/70). And on and on and on through the end of November. What a nut.
Posted by Fate Music at 20:31 1 comment:

Around November 3, 1970 the Associate Press (AP) had an item in lots of papers noting that Janis Joplin had left $2,500 in her will for a big ol' celebration of her life after her passing. Invitations went out reading "The drinks are on Pearl", and it happened at the Lion's Share in San Anselmo. The AP story (e.g., in the Red Bluff Daily News, November 3, 1970, p. 8) says that the GD and other rock groups entertained.

Mastropolo 2015 puts the date of this event as 10/26/70. I don't know how he knows that, but there it is. (update: as usual, Corry was on it before I was --in this case, a decade!!-- and the date comes from his post.) He references the memoir of Janis's road manager John Byrne Cooke in saying that members of the Quick, Big Brother, and the GD formed various playing combinations, which is a little different than a GD gig per se.

As of now, I am listing this as a GD gig. I am also coding the Wales-Garcia Matrix gig advertised for this date --the latest with Howard's name on it, as far as I can recall-- as canceled. Any thoughts on that?

I also note that LIA hipped me to a canceled GD gig in Columbus, OH, between 10/24 and 10/29. Janis's wake may well account for the cancellation.
Posted by Fate Music at 19:59 2 comments:

I don't know where this would have taken place, but the date of June 2, 1983 seems right, in between shows at the venerable Roseland Ballroom on 52nd Street and promoter John Scher's main room, the Capitol Theatre in Passaic outside of Philly.

I have gotten direct quotes on the Garcia-on-the-side (GOTS) material, and sketchily paraphrased the GD history and other stuff. The man was just so brimming with energy. Check him out around 7 minutes in to part one, talking about the amazing creativity and peculiar genius of so many Deadheads. Good stuff.

update: if you want verbatim, you can copy it from ... the published transcript. D'oh!

As I have noted, Garcia's final Keystone Family gigs before jumping ship to Wolfgang as his permanent and exclusive hometown promoter took place at the end of May 1987, as In the Dark was getting huge. The big fella would play very few club gigs after the Wednesday (27th)-Thursday (28th) and Saturday (30th)-Sunday (31st) Stone shows.

The Friday gap night always just struck me as a day of rest. But, well, was it? 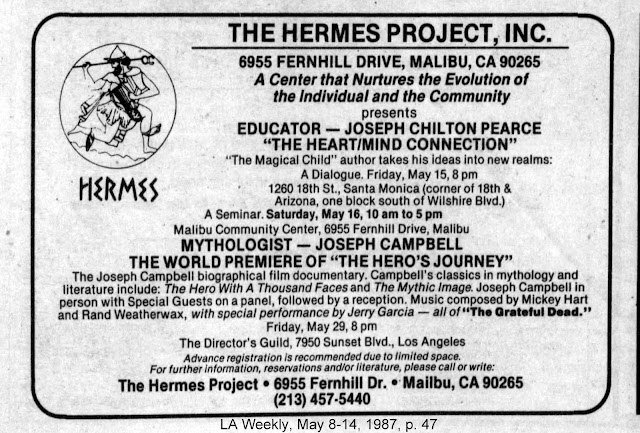 The Hermes Project, based in Malibu, was promoting a world premiere showing of "The Hero's Journey", a film about mythologist Joseph Campbell, featuring the man himself, plus special guests on a panel, plus a reception. Music composed by Mickey Hart and Rand Wetherwax --presumably "The African Queen Meets The Holy Ghost"-- "with special performance by Jerry Garcia" [itals original], all scheduled for Friday, May 29, 1987, 8 PM, at the Director's Guild, 7950 Sunset in LA (map).

The event got other line announcements in the LA Weekly and the LA Times, but I found no ex post accounts, nor have I ever heard of this thing before. Of course, the November 1, 1986 "Ritual and Rapture" event at the Palace of Fine Arts Theatre in San Francisco is well known, and it included a performance of the Hart-Wetherwax composition, with Garcia playing a headless Steinberger. Blair Jackson wrote it up in Golden Road (no. 13, Winter 1987, p. 6).