Here's a weird one bottom of column 1 to top of column 2: 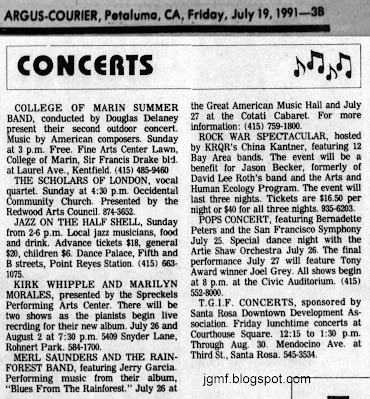 "Merl Saunders and the Rainforest Band, faturing Jerry Garcia. Performing music from their album Blues From the Rainforest, July 26 at the Great American Music Hall and July 27 at the Cotati Cabaret"
Several possibilities.

First, perhaps most likely (?), whoever called this in to the Petaluma Argus-Courier dropped Jerry's name in connection with Merl's 1990 Blues From the Rainforest release, and the person at the paper was somehow left with the impression that Jerry would play the listed gigs. It wouldn't be the first time that Garcia's name would pop up in unexpected ways in the promotion of a Saunders gig that Garcia really wasn't involved in. For example, almost a year after their last shared agglomeration had knocked off, a preview for an August 1980 Saunders gig in far northern California teased that Merle [sic] was "currently playing with Jerry Garcia under the name of 'Reconstruction'." (1)

update: heh heh, my own files would help me. I know he was scuba diving on 7/27/91 in Hawaii, which would certainly require flying out no later than 7/26. I don't know if that trip would have been planned by whenever the 7/19/91 item was called in, but I strongly suspect so. This makes Hypothesis 1, that the Saunders camp somehow, surely innocently, gave mistaken impression that Jerry would play, to the Petaluma paper, seem most likely.

"Citizens of Boise - Submit! You Are a Conquered People"