“A take on “Visions of Johanna” includes alternate lyrics.”

I am no Dylanologist and presume this is well-known, but it's news to me. Seems like I am going to have to check this out.


A take on “Visions of Johanna” includes alternate lyrics.

Bear Tracks and Bear Drops in the Bear Republic

Some classic 6/28 banter, including Phil, "This song is about Bear Drops". Heh heh - that'd be an LSD reference, ladies and gents.

Oh yeah, can I get a ruling on the venue? Deadlists gives Veterans Auditorium, Corry gives Sonoma County Fairgrounds.
Posted by Fate Music at 9/19/2015 11:46:00 AM 6 comments:

One of the early Deadbases, maybe the original, had a little review of the September '73 Dead shows at William & Mary (né College of Divinity, Philosophy, Languages, and other good Arts and Sciences, chartered in the Virginia Colony in 1693 by, you guessed it, William and Mary), special shows, maybe second night was a freebie? Anyway, these shows have always had an aura to them thanks to the magic of the book, the "mere" printed word.

But many was the night spent dreaming of hearing them. This being the Dead, and via multiple magics, we can enjoy a sweet sounding matrix tape, Latvala's cassette and Jimmy Warburton's audience tape, it with our late summer Saturday morning coffee, sounding fine.

In 2011 I made a post under the heading of "GD in Walnut Creek; East Bay Psychedelic Scene?" in which I noted the mystery surrounding the Dead's Listed gigs in Walnut Creek on March 1-2, 1968.

Reader Brad Vicknair has graciously shared an ad for the show and some wonderful recollections, which I reproduce here with his permission. Thanks, Brad! 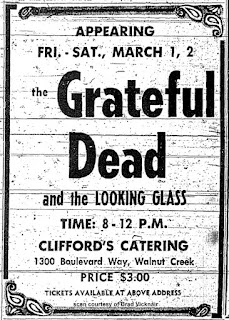 I saw The Grateful Dead at Clifford's Catering in Walnut Creek on Saturday, March 2nd, 1968.

I was friends with twin brothers and their older brother was one of the guitar players for The Looking Glass. They were a band from Concord/Walnut Creek that played locally in the late 60's. The drummer's father booked The Grateful Dead and The Looking Glass at Clifford's on Friday, March 1st and Saturday March 2nd. The Dead played the weekend before at Kings Beach Bowl in Lake Tahoe and the day after their Saturday night gig in Walnut Creek, they played on two flatbeds on Haight Street.

The venue was originally Portuguese Hall. A poster from 1963 promoting Bobby Freeman, Wally Cox, and The Untouchables lists the venue as Walnut Creek Hall. In 1965 and 1966 the venue was called Holy Ghost Hall. Local bands and major recording artists appeared, including Sonny & Cher, Martha and the Vandellas, Dick and Dee Dee, Dobie Gray and others. In 1967, the venue was called Scuzzy Mouse. The venue has gone through many name changes over the years, but is best remembered as Holy Ghost Hall.

The venue was called Clifford's Catering when The Grateful Dead appeared. Clifford's was a restaurant/catering business that would rent out the hall on occasion. I have a copy of an advertisement for The Grateful Dead at Clifford's [see above-ed]. I don't remember seeing a poster, but there may I have been one. I had a ticket, but it's long gone. It was black and white, about 3" x 5", with a I drawing of a hippie as the central image and LSD, a peace sign and other symbols in the I background. I have a Looking Glass business card and the art is similar in style to the ticket that I remember. The ticket and poster, if there was one, was probably band generated.

The hall at Clifford's was upstairs. There was a table at the top the top of the stairs where a couple of girls were selling tickets. We bought our tickets and entered the hall, which had a raised stage with curtains in the back and on the sides. It wasn't overly crowded, but more people may have attended on Friday night.

When The Dead came on, it was easy to move freely in front of the stage. Pigpen was having problems with his Hammond B3. The sound was going in and out, and he spent the first two or three songs under the keyboard, by the foot pedals. There was a sound man helping, but it was mostly Pigpen working on the organ.

Mickey Hart was playing wildly! He broke drumsticks and in one seamless motion, sent them flying over his back shoulder and grabbed another drumstick from his bass drum. He impulsively ran off stage mid song and returned with a large gong. Mickey seemed to be enjoying himself and was entertaining to watch!

Pigpen took control when they played a long version of "Turn On Your Lovelight".

Later in the evening, the band was stretching out musically. Behind me in the back corner of the hall were friends and family of the band. A woman with dark shoulder length hair, wearing a black floor length dress with multiple overlay and a little girl about two years old with curly blond hair, walked up to the front of the stage. It was Mountain Girl and her daughter Sunshine Kesey. Mountain Girl put Sunshine on the stage in front of Bob Weir and he handed her the mic. As the band continued to play, Sunshine screamed into the mic at the top of her lungs like in a horror movie! Mountain Girl eventually took Sunshine off the stage and they returned to the back of the hall.

I was blown away by the whole experience of seeing The Grateful Dead!

My friend later told me that some of The Dead were looking for a place to crash on Friday night. His brother, the guitar player for The Looking Glass, lived with his parents in Walnut Creek and their response was, absolutely not! Supposedly the drummer and his father took in some of the band at their apartment in Concord.

When leaving Clifford's there was a sign at the top of the stairs announcing Country Joe & the Fish would be playing in two weeks. The Grateful Dead were paid $3,000 for the two nights and the promoter ended up losing money, so Country Joe & the Fish never appeared. Bands continued to play at the venue, which was called The Saranap Inn until 1973. In 1974, the Sufis bought the building and Sufism Reoriented (Meher Baba) established the Spiritual Training Center at the location.

As I have said, blogging will be very intermittent for awhile.

I wanted to take this opportunity to thank y'all for reading. It makes me happy. I am especially happy when folks reach out and share information, post comments, etc.

There are something like 500 posts here. I have made very liberal use of tags as a kind of index to the site. I'd like to encourage you to click around some tags and read some old stuff while new blogging is spotty.