Quicky: I think Reconstruction 6/13/79 at the River Theater in Guerneville should be dated 6/23/79

The tape we have of the titular show comes from Alan Bershaw. Turns out he didn't tape it, but circulating versions come from his copy. This is a 2nd copy, lineaged as follows: Nak 550 w/CP3 caps > MAC > Nak 582 playback > 7.5 ips reel > Alan's reel.

I am the last thing from a gear head, but the Nak 550 is the deck, but the CP3 caps would go with the mics, which remain unidentified. I also don't know the speed at which Alan's reel was recorded.

Anyway, let's first establish that, even with such good provenance, a '2' can become a '1' via careless manuscripting/transcription, and so it's not crazy to think that 6/23 could become 6/13.

Second, doggy no barkie. There is no other evidence for Reconstruction at the River on 6/13/79 (a Wednesday).
Third, there is evidence from the Santa Rosa paper that the theater was showing movies that night (King of the Gypsies at 7:30 and Hurricane at 9:30, for the curious).

Fourth, the 6/23/79 Reconstruction got lots of play in the papers.
The preview notes that "Saturday’s concert is expected to be one of the last Sonoma County appearances for the group, as Garcia will soon be going into the recording studio to begin working on a new Grateful Dead album".

There was also a handbill: 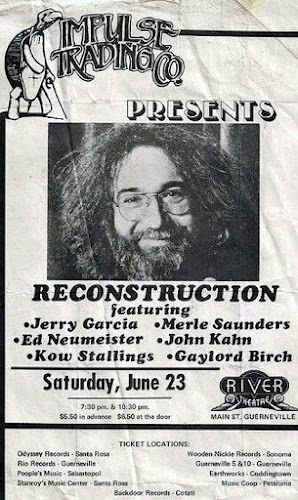 If Reconstruction was such a big deal, why wouldn't a show ten days earlier have gotten similar sizzle?

Fourth - and I could have started with this, because it's QED from here, IMO - among the relatively undocumented detritus of the Betty Boards was this lil ol cassette:
As it happens, a little birdie has told me that the material on this cassette is identical to material circulating from Alan's tape. Even the temporal assignment lines up: Alan's tape is primarily of the late show, and this tape says "2nd set". Not exactly the same wording, but it's pretty clear there were early and late shows this night.

In short, I am totally convinced that 6/13/79 is a phantom, and that the material we have with that date is actually from ten days later, 6/23/79, same venue.