Archives of the Penn State Daily Collegian are available online at http://digitalnewspapers.libraries.psu.edu/, which might prove useful for others (I have found lots of Jerry-related stuff).

Just for giggles, I thought I'd post this little snippet from the police blotter over the weekend of the Jerry Garcia/John Kahn show (Robert Hunter opening) at Eisenhower Auditorium on 11/16/84: 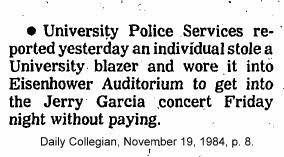 Good scheme, too bad it didn't work. Also funny to me because it's so east coast. Hard to imagine anyone at, say, CU-Boulder thinking a university blazer would draw attention away from them. :)