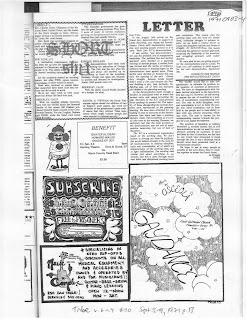 Here's another one that puzzles me. This scan from the Berkeley Tribe v.6 n.4 (issue #110) (September 3-9, 1971), p. 13 advertises a benefit for Marin County Head Start featuring Grateful Dead, Howard Wales and Shades of Joy on Friday-Saturday, September 3-4, 1971 at the Harding Theater in San Francisco.

First, this is not a Grateful Dead date that's known to me, so it's interesting in that regard. I don't have anything else going on for Jerry on this weekend, so it fits in the schedule. I have an unknown NRPS gig listed for September 5 (Sunday), no venue or other info ... no idea where that comes from. I show Garcia and Saunders at the Harding Theater on September 10 and the NRPS there on September 23. This is an odd little cluster of shows at this venue which begs an explanation, I think, but in any case another couple of gigs fit this little pattern.

Second, last year I had posted on a listing in the (San Rafael) Pacific Sun for a Grateful Dead gig at Marin Vets on 11/28/71 to benefit, you guessed it, Head Start. Nothing more ever turned up and, as Corry said in comments, it seems unlikely that the event happened. But it's weird to find another Head Start connection from just a few months before.

Third, the presence of Howard Wales on the bill is especially interesting. LIA has been writing some incredibly rich posts on the Hartbeats, the surface of which I have barely scratched. In his post on the July 1970 "Hartbeats" gigs, he a) mentions the story that Wales once had an audition with the Grateful Dead; b) notes McNally's timeframe for this of September 1971; but c) speculates that, instead, the Wales audition took place around July 1970 instead. Now here we have a Grateful Dead/Wales co-billing, in September 1971, in the same month during which we know the Grateful Dead were rehearsing their new keyboard player, who turned out to be Keith Godchaux.

The listing that forms the object of this post makes me return to the September 1971 time frame for Howard's GD "audition". Let me go a step further ... the story of Keith becoming a member of the GD is well known. Here's how Donna relates it, from Blair Jackson's fantastic cutting room floor, once she and Keith had flashed on him playing with the GD:

"We went home, looked in the paper and saw that Garcia's band was playing at the Keystone, so we went down, of course. At the break, Garcia walked by going backstage, so I grabbed him and said, 'Jerry, my husband and I have something very important to talk to you about.' And he said, 'Sure.' I didn't realize that everyone does that to him. So Garcia told us to come backstage, but we were both too scared, so we didn't. A few minutes later, Garcia came up and sat next to Keith, and I said, 'Honey, I think Garcia wants to talk to you. He's sitting right next to you.' He looked over at Jerry and looked back at me and dropped his head on the table and said, 'You're going to have to talk to my wife. I can't talk to you right now.' He was just too shy. He was very strong but he couldn't handle that sort of thing. So I said to Jerry, 'Well, Keith's your piano player, so I want your home telephone number so I can call you up and come to the next Grateful Dead practice.' And he believed me! He gave me his number."

(Actually, Keith was not completely unknown in the Grateful Dead world. Betty Cantor had used him on a studio session for a record by James & the Good Brothers and thought very highly of him.)

(That last bit isn't especially germane, but I wanted to note the James & The Good Brothers connection, having just posted on it, and note further that, per Matt Scofield's deaddisc, Keith is not credited on that album. FYI, FWIW, etc.)

Why do I quote that at such length? Well, I observe that Garcia and Saunders played the Keystone Korner on September 16, 1971 (listing in Hayward Daily Review, September 16, 1971, p. 25). I note that circulating recordings of Keith's GD rehearsals are dated from September 27. So, wild speculation time, friends and neighbors: I suggest that September 3-4 at the Harding were the tryouts with Wales, that it didn't go especially well, that Keith and Donna buttonholed Jerry on September 16, and that Keith started in not more than 11 days later with the Grateful Dead. How's that for an extrapolation?!?
I also wonder, compounding speculation with speculation, if all of this might not tie into all of the record company backing and forthing and the relatively long gestation period of Hooteroll? (remember -- All Hooteroll?, All The Time!), which wasn't released until December. Again, I know I am going way beyond the evidence, but isn't it also interesting that Shades of Joy is on this bill, another Douglas Records client?

Sorry to throw so much out there with this. Anyway, here's an attempt at a summary of what this post does:
OK, 'nuff for now, I guess. The Berkeley Tribe is a masterpiece!
Posted by JGMF at 21:47