Browne, David. 2015. So Many Roads: The Life And Times Of The Grateful Dead. Boston, MA: Da Capo Press [a member of the Perseus Books Group].

I stand by my initial assessment - this book is the real deal, chock full of great tidbits, fluently written. This is a great addition to the canon, standing alongside Jackson, McNally and the rest.

Browne's method involved lots of interviews and access to materials with and from just about all of the key survivors at the very center of the Grateful Dead world. As a scholar, I lament that the move to improve the transparency of work done using qualitative methods underway in various scientific fields, which is a very good thing, could never work for this kind of writing. I will treat specific facts given by Browne as correct, unless I can find something to raise doubts. I rarely do.

The usual reading notes methodology. I know the endnotes don't format properly on blogger - one gets that for which one has paid, and I need to do it this way for my own purposes. Notes below the fold.

Via the Facebook page of the amazing Jake Feinberg, which is a treasure trove of text snippets from Jake's radio show, which you should listen to and support.


Too Loose to Truck, By Steve Mitchell

I was playing with a piano player 4 nights a week at a club called "Shipwreck Pete's." It was John Allair and myself, we were playing duo gigs. John sang and played piano and a B-3 organ at the same time.

We're playing one night and this fella comes in with his saxophone and he's dressed all in black and he's got a black hat on and nobody knows who he is and he's standing there in the middle of the dance floor getting knocked around and he could play pretty good - it turned out to be Van Morrison.

Van liked what we were doing so he played with us. He came to our gigs and played with us cause he enjoyed playing and he wanted to develop his saxophone chops.

I had run into Phil Lesh at one of Mickey Hart's gatherings and we talked and he said he wanted to be able to play when the Dead weren't on the road.
It was all the Marin County guys, John Allair, Terry Haggerty from the Sons of Champlin and Van and Phil Lesh. There was a revolving door of people who were in and out of the band. Most of the time it was Phil, Allair, Haggerty and myself.
https://www.facebook.com/jake.feinbergshow/posts/1199080536835142

If These Halls Could Talk

If These Halls Could Talk: A Historical Tour through San Francisco Recording Studios – by Heather Johnson (2006).

Has anyone ever seen a copy of this? I would like one, but it's $170+ at Amazon and not really available at my usual on-line used book haunts.

I'll just throw this out there for comment, spitballing, and eventual dismantlement as a putative mapping (for Garciaverse purposes) of Musics that Garcia directly and quasi-publicly performed. 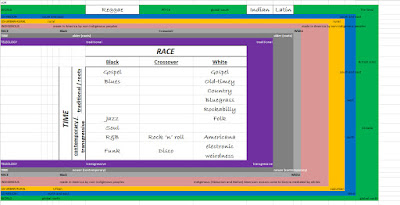 Here are a few design principles (such as they are).

1) minimize the sum of the squared errors of the distances between where it's mapped and where it belongs on every dimension.

2) the core 2x2 is the same as above, the distribution is pretty similar, and I have added a crossover category.

3) not intended to be precise or rigorous - just impressionistic. The "musics" are musics that Garcia played, in the different font. Where a musical idiom came to him derivatively (e.g., Native American music through Bill Monroe, Hawaiian music through white country music (though he might have heard it directly on the radio with his grandmother?), African idioms via the banjo, etc. There's a story to tell about all of those that I hope to get too. Read it like a Humbead's Map, and don't expect linearity, monotonicity, etc. etc.

4) the core of the table are what can properly be called "American musics", though I am a little queasy about having Hawaiian and Native American on the outside. See my point about mediation in note #3 - I intend this to portray musics that Garcia directly and demonstrably engaged. So Indian and Latin musics get the special font, because he played in these traditions.

Older Versions below the fold. 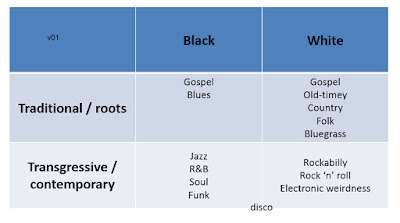 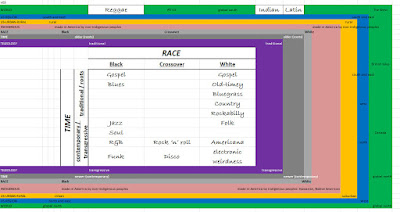 Email ThisBlogThis!Share to TwitterShare to FacebookShare to Pinterest
Labels: musics


I didn't quite know what to expect. On a read, it felt like this was all material that I already knew. From a strictly informational perspective I didn't feel like I got anything I didn't know out of Jerry's mouth. But when I went back to transcribe some key things, so engaged the book a second time, I felt like it really painted an intimate picture of Jerry by Jerry. McNally did a great job in using his own creative talent to let Jerry --a Jerry, a version of Jerry-- paint a lovely little posthumous self-portrait.

This is sort of like my "in praise of editorial judgment" thing --no reader here could possibly disagree-- Dennis McNally obviously knew Garcia well, was blessed to have spent a lot of time talking about everything under the sun with him, and he creatively arranges a lot of the material that I know (of), but hadn't really understood. It's nicely paced, a nice easy afternoon conversation, plenty of room to breathe, unlike so many of the Garcia interviews we get to hear. It's a nice piece of work, and it'll be on my shelf (or wherever I put it) for the long haul. (It's so nice that I won't even lament that absence of spatiotemporal identifiers for the quotes.)

A note on "reading notes": this is just my selective culling of quotes of particular interest to me. There's nothing representative about this stuff, I don't imagine. I pick up different stuff from LIA (who can remember it all without the contrivance of "reading notes"). The method is to sort these quotes into their respective topic buckets  (with little tags like #why and such), then put the book aside and move on to the next thing.

Raw notes below the fold. I lost steam with bolding the names at some point ...

I was doing some thinking about Bob Weir's musical journey, and what I view to be the pivotal "Bobby Ace" period, running most obviously from about mid-1969 through 1970. And, since we were just talking about Family Dog shows, I got to thinking about the April 1970 acoustic gigs. Long story short, I just did some sniffing around some of the more obscure (in the Garciaverse) numbers they did. Here's a back-of-the-napkin breakdown.

Note that, as far as I can tell, this is entirely roots-derived white contemporary stuff - is there a black songwriter in the whole repertoire? Anyway, FWIW.

Everly Brothers Originals
! song: All I Have To Do Is Dream (not their composition, but I think they did it first)
! song: Cathy's Clown
! song: So Sad (To Watch Good Love Go Bad)
! song: Wake Up Little Susie

George Jones
! song: The Race Is On
! song: Old Old House
! song: Seasons Of My Heart

I had never quite seen this much specificity on the dates around Lenny Hart, but in combination with some other factors (Gar talking about the situation with Rakow at the Family Dog, which the GD were playing through 3/1/70), this really seems pretty precise.

And specifics on Lenny's Perfidy:


During the time he served as business manager, Hart wrote six checks, totaling $35,200, on the Dead’s account made out to the “Sunshine Company.” An investigation revealed that the Sunshine Company maintained an account at the same bank and the account was in the name of Leonard B. Hart, according to Thomas. The affidavit also said that Jerry Garcia, a member of the Grateful Dead, told San Rafael police that MGM Studios wrote $11,000 worth of checks for music composed by Garcia. The checks were made out to Hart, as trustee of the group, but neither Garcia nor the group ever saw the money".