LN jg1982-10-30.jgb.all.aud-maurins.120334.flac1644
LN jg1982-11-01.jgb.all.aud-dogman.100575.flac1644
I have recently copped to the fact that I have no idea who the backing vocalists are from October 24, 1982 to November 15, 1982, comprising a swing south to LA and Arizona, east across Texas (Austin and Houston) and to New Orleans, and up the eastern seaboard. It hurts me to have failed you so (thus far!). I will work harder!
update 20211227: they have now been identified
That cleared my brain to be able to post a couple of listening notes from Arizona and Austin. I don't have a lot to report except that, as I have noted before, Greg Errico hits like a linebacker. 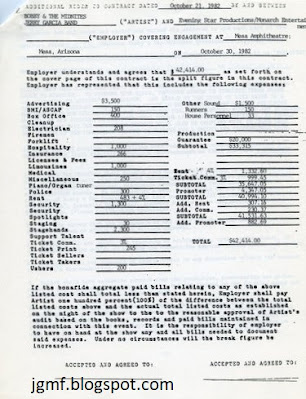 Not much noted for the afternoon show on 10/30 in Mesa, AZ,, except noting that he takes about 20 seconds to set the desired tempo for the Midnight Moonlight encore. I did like the JGC attendee recollection that "There was a Halloween costume contest in between the Bobby set and the Jerry set. The winner was dressed in a home-made Magic Mushroom costume and he beat out a guy in a store-bought E.T. costume by crowd affirmation". Ouuccchhhh.
Two Errico highlights on 11/1 at the Austin Opry House: during HTC, around 9 minutes in, he starts banging double-time to get Jerry out of a rut, and it works. Being so forceful here, there's no denying him - fast and loud, and Garcia has to get faster and louder in response. Then, in Deal, Errico just jackhammers for like a minute and a half from 5:30-7, so deep that it has a kind of pacemaker effect on the listener. My heart felt like it wanted to synchonize with what the drummer was doing, leaving me a little lightheaded. 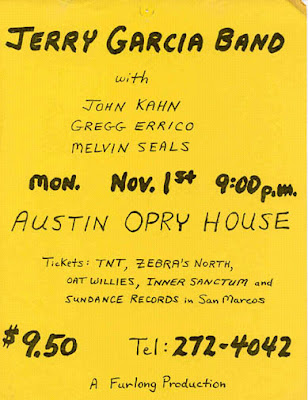 I Have A Confession To Make

I have posted many, many times about the early 80s backing vocalists (see Appendix below). Our understanding of who was who, and when, was greatly abetted by the fact that Corry Arnold took notes from the GD Ticket Service ("thank you, and stay in touch"), which also announced Jerry Band shows and tours and sometimes identified personnel. Here's how I currently understand things. This is all catalogued at Corry's "Jerry Garcia Band Personnel 1975-1995" post at LLD, or eventually will be to the extent that he agrees with me.

The starting date of this configuration is not certain (see the discussion here), but overall this seems pretty solid.

Intrepid researcher slipnut found some reference to Liz Stires's sister singing on the first gig in this window, but I have shown the picture below to Julie Stafford, and she thinks that is her (left of the picture), and wasn't entirely sure but thought it could indeed have been her first night out.

As far as the end of this window, Liz told me that she left the group just before the tour ended, after a gig in Richmond (6/22/82).

We are fortunate that a review of the 6/23/82 show mentions "the female vocalist", confirming that Julie carried on as the lone backing vocalist, presumably for the last two nights of the tour.

At one point, I thought Jacklyn LaBranch and DeeDee Dickerson began here. But Jacklyn has said very clearly that she and DDD started together at the Keystone in January 1983. I had also wondered whether Julie continued through the end of 1982, but she has said she did not.

So, as of now, this is a three-week hole in my personnel knowledge that disconcerts me, on the one hand, but also delights me because we still have mysteries to unravel.

With Jackie's clear statement that she and DDD began in January '83 at the Keystone, the start of this period seems clear. I used my unreliable ears to pin down the end of this window, noting the very different vocal sounds and stylings between May (DDD) and July/August (Gloria).

The front end of this period is not entirely certain. I had originally thought Gloria started on 7/28/84, because there were no known electric shows between May (DDD) and then, while at the same time we know Gloria was with the band out east in August, so must have been in the fold for the local gigs in late July and on Jerry's bday. But then in 2018 I discovered previously undocumented Keystone Palo Alto gigs on July 10-11, and it seems extremely likely that these would have been Gloria's first with the band. It is not quite an iron law, but a clear regularity, that the Jerry Band liked to break in new members on off-nights, off the beaten path, or both. A Tuesday-Wednesday down in Palo Alto fits that bill pretty well.

Appendix: Mistakes along the way

late '83 tour: used to think this was Gloria, then discovered it was DDD

late '83 tour: further confirmation that it was DDD and not GJ

Wabbit Hunting with Garcia and Kahn in Oakland and Guerneville, August 17-18, 1985

I shouldn't be mean. But posterity might not recall that many characterized Jerry's vocal sound in 1985 as resembling Elmer Fudd, so I am doing it for future generations. You can thank me later.

Not much to report. While the Dunsmuir House and Gardens maybe have been a cool place to see Jerry on an August afternoon ...

... he sounds quite bad on this August 18th while delivering two sub-40 minute sets.

The night before, at the sweet little River Theater in groovy Russian River town of Guerneville, is a little bit stronger, to my ears.

! Recording: symbols: % = recording discontinuity; / = clipped song; // = cut song; ... = fade in/out; # = truncated timing; [m:ss] = recorded event time. The recorded event time immediately after the song or item name is an attempt at getting the "real" time of the event. So, a timing of [m:ss] right after a song title is an attempt to say how long the song really was, as represented on this recording.

! R: seeder comments: Very clean recording without any significant flaws other than intermittent loud close up audience noise. s1t01 - master recording levels during the first 25 seconds were extremely low, i applied a +10 dB gain to this small segment using SF6 to bring it line with the remainder of the recording.

! P: s1t06 RFTR is deeply painful to listen to. Garcia absolutely crashes as this song begins, and he barely brings it to the finish line.

! song: Goodnight Irene (s2t06): I have always wondered if, in singing the "jump overboard in the river and drown" line, Jerry became 4 year old Jerry, little Jerry, and replayed his father's drowning in the Russian River. One would think not, because that would seem a little morbid, to say nothing of painful, for our boy. But maybe he didn't go there. Or maybe he went there and he was OK. But it's hard to imagine that a person imprinted with that memory, that vision, wouldn't go there. Who knows.

! P: s2t06 GI The acoustic setting lets Jerry not oversing too badly, as of course he'd have to do with the Grateful Dead, and to a lesser extent, with his electric band. In that sense, and because the tape is so clean, we get another view on Garcia's voice in August 1985. He sounds better than he did in the GD, that's for sure. But it ain't entirely pretty. He is very limited, and his talking and singing voice both have the nasally, I-just-shredded-my-already-bleeding-sinuses timbre characteristic of Crosby's voice during this same time period, as well as a certain wascawwy wabbit huntew. Just Say No to Cocaine, Kids.

Not much bandwidth these days, so some bullets.

1) I am way behind on posting listening notes. I have lots backed up, and many of them are pretty spare. I have sometimes threatened to post these kind of notes in batches, just to get them out of my mind, and not always followed up. This time might (or might not) be different.

2) I wonder what the story is behind the random 90s JGB board tapes that circulate? I suspect every one of them has an interesting story, because there was not systematic leakage of these - Cutler kept a pretty tight lid on things, and there was just less demand for these than for contemporary GD tapes.

3) Jerry sounds old, but much better here than five days earlier. Higher asymmetric --downside-- variance in this period than any other. The Rock Bottom period had higher overall variance, comparing the killer high guitar peaks with the killer low vocal troughs. Ten years later, the highs don't get so high, but, as on 4/20/94, the lows could get really low. 4/25/94 II is pretty good, nothing too problematic.

3) "Money Honey" got a re-arranged ending somewhere in the late period. I would kind of like to pin down when it showed up.

4) Nice "Reuben And Cherise" here. It's my favorite Garcia Band song, and I think I hold it to a pretty high standard. It sometimes went 'round the bases too many times at the end, stuck in the same rut that its album-mate "Cats Under The Stars" often found. But Jerry is mindful here to throw in enough wrinkles to make things interesting.

5) Final JGB "Señor". Sigh. I love love love love love this tune so much. He mumbles a fair share of the lyrics, but there's some good stuff here, too, like the growly "magnetic field" and a repeated "I'm ready when you are" at the end.

6) Crazy dense period for Jerry at the Warfield: April 18-19-20 and 25-26-27 with JGB, then May 4-5 with Grisman. Maybe Deborah needed some new shoes, and goodness knows that golden eggs don't lay themselves.

! P: s2t05 RAC Donny is offbeat. It takes 45 seconds at the start to set the 1. That said, I think he nails every word of the lyrics! He has finished singing the lyrics 5:28, goes around several times, goes higher up 5:40 and Melvin synths a little alongside. A little bit of variation in the phrasings in the 6 minute mark. Now I fear this is going to get stuck going around for too long without enough happening to justify it. And I find myself there 6:45. Jerry needs to mix things up, or end it. A little more wrinkling right over 7, longer phrases than one might often hear in RAC (not sure), but good that he is making it more interesting. Descending bit 7:45 good. He's hitting the deeper chords to signal the end 8:30 and so forth, then digs in to finish it 8:50. A very good late era RAC, I have to say!

! P: s2t06 Señor a few lyrical stumbles. 1:48 is that mumble mumble still playing in that hay-cant lot. 2:27 mumble mumble, maybe should have been "I can't stand the suspense". Then mumble waiting there Senor. 4:40 mumble I remember. Returns to eyes glued to the door, instead of picking himself off the floor.  He does some nice low growly stuff, as on "magnetic field", which is how Bob did it and I don't recall Jerry doing it so much. He repeats "I'm ready when you are" in the last line, rather than "can you tell me what we're waiting for", but it WORKS.