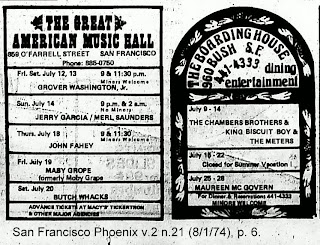 Merl Jr. said that the tape to find would be Garcia/Saunders at the Great American Music Hall on a day that Crosby, Stills and Nash had played a Day on the Green. He says that Jack Casady and Stephen Stills came over after the CSN gig and jammed with Jerry and Merl and that it was amazing. 7/14/74 fits the bill - JGMS were at GAMH, and CSN were playing a Day on the Green.

Interestingly, I found an ad from the San Francisco Phoenix which lists two shows for the date, starting at 9 p.m. and 2 a.m. Very unusual. I wonder if it was planned ahead of time that Casady and Stills would come by?
Posted by JGMF at 23:38 9 comments: