"More and different" pithily summarizes what Garcia was pursuing in his Side Trips relative to what he got out of the Grateful Dead. Here are a few snapshots of some over-time trends I find illuminating. 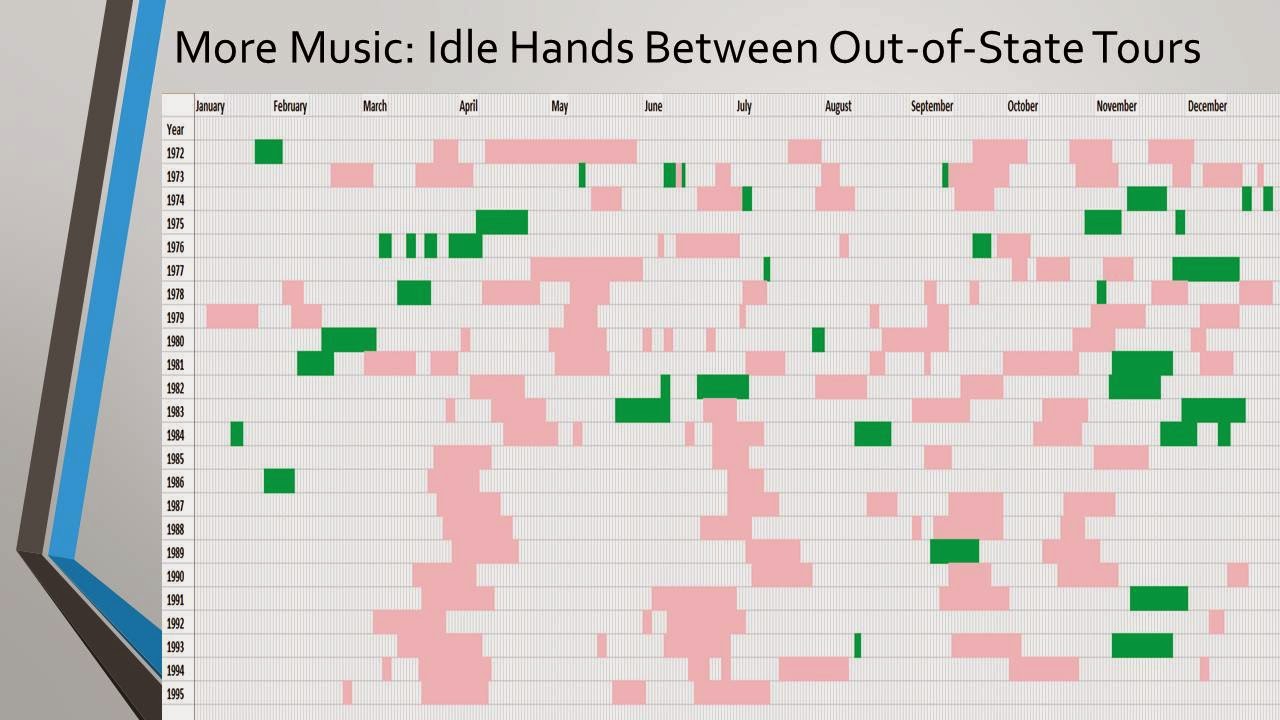 "More": this is a calendar view of Garcia's out of state tours with the Dead (pink) and his side bands (green), which thus also indicates time he was mostly in the Bay Area (there are a few SoCal trips not captured in any of these three categories). He always endeavored to fill these spaces with hometown gigs. 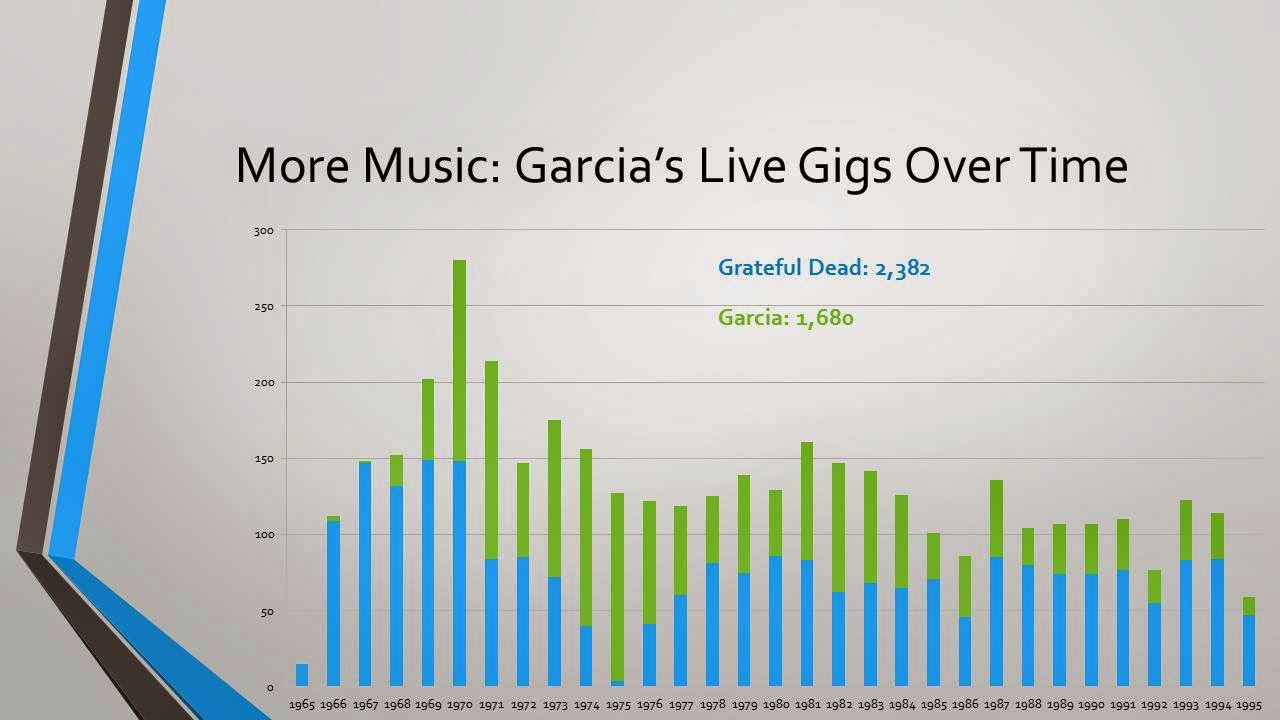 Pretty self-explanatory. This is my gig count as of two weeks ago, always subject to change.

Here are a couple of time series that I find depressing. The first shows Garcia gigs promoted by Fred Herrera (Keystone Korner, New Monk/Keystone Berkeley, Keystone Palo Alto, The Stone) and by Bill Graham over the years. In mid-1987 Garcia's 16+ year business relationship with Freddie comes to an end, wholly supplanted by Bill Graham. The second shows the decline of college gigs (Dead and Garcia), just a little color.

The next (last) one is another depressing one, showing the ebb and flow of Garcia's engagements with other artists (non-Dead, non-Garcia) over time both live and in the studio. Note the giant hole that forms as the opiates take hold during the 1975-1985 decade. 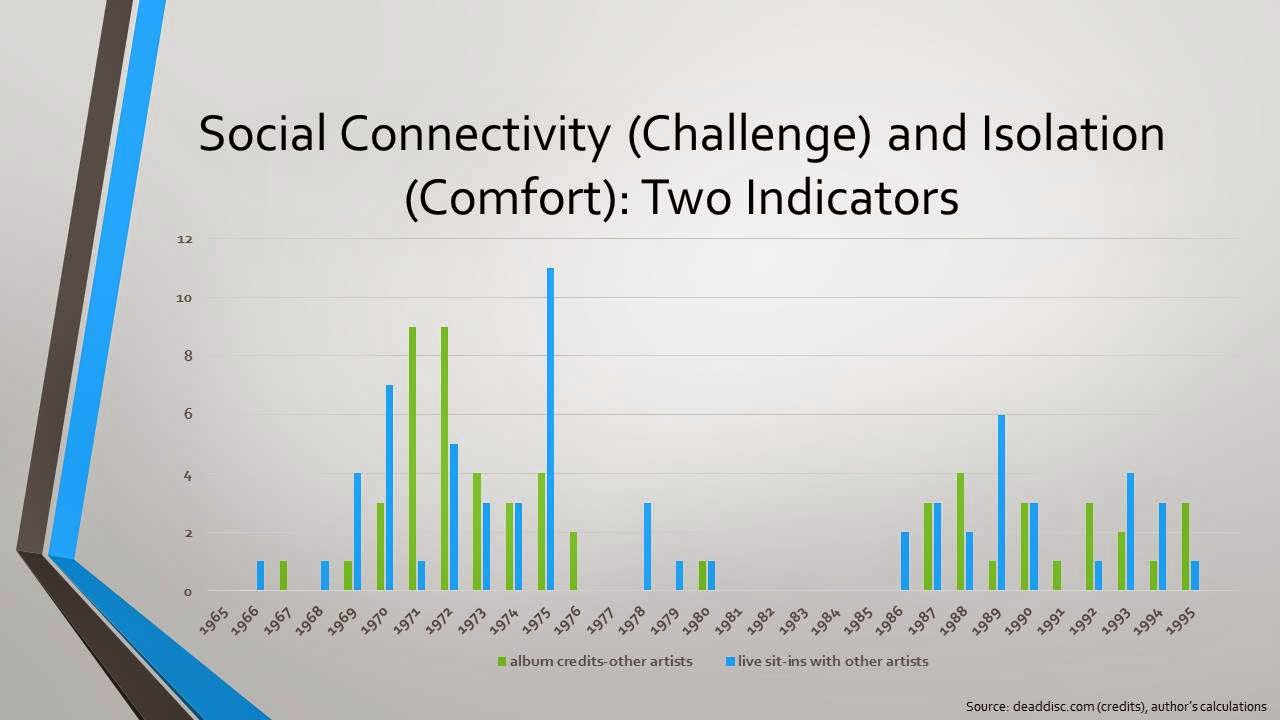 As you might have been able to tell, this is a quiet time for the blog. Lots going on in the real world, will be blogging catch-as-catch-can for a while.
Posted by Fate Music at 18:14 No comments:

Just came across my scan of the cover, random posting. 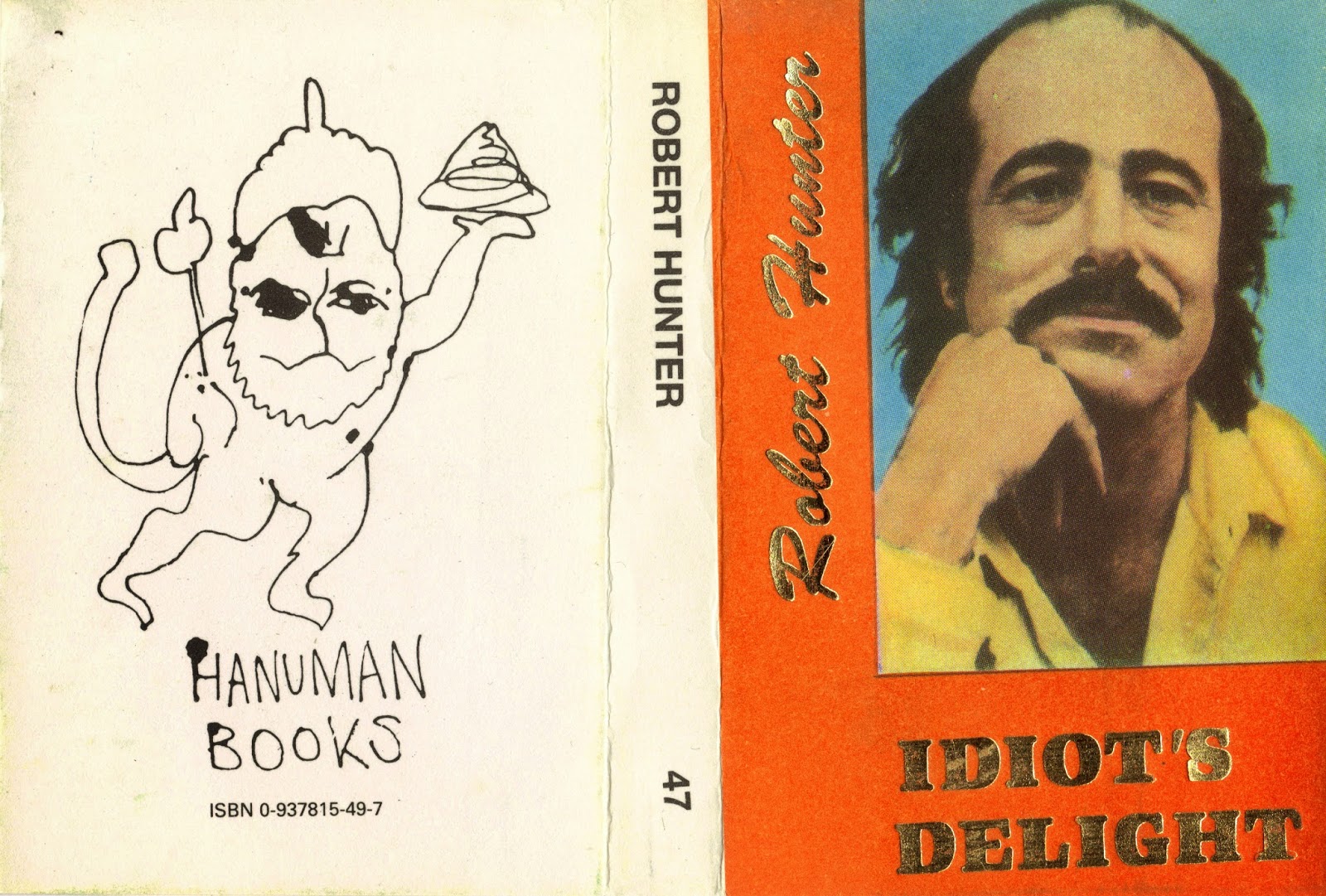 Here is what I believe to have been the running order of the whole weekend. This is pieced together from schedules, tape lists, and all manner of published info (see REFERENCES). I am about 90% confident in the sequencing. The times are mostly made up, though we sometimes to have stuff to go on (one of the reviews mentions the Dirt Band coming on at 10 pm on Sunday, for example).

Jim Nelson on the Drums and Several Great Rarities: JGMS at Keystone, October 4, 1974

This is great to hear.

2) Lots of interesting material including, here, some great jazz ("Valdez In The Country", "People Make The World Go Round", "Freedom Jazz Dance"), and a great rare (in the Garciaverse) Motown, "Ain't No Mountain High Enough".

3) personnel: Bill Kreutzmann had been drumming with JGMS since about November 1973, by my reckoning, and then, after 9/2/74, JGMS goes in another direction. Here we have Jim Nelson on a tryout, it would seem. Paul Humphrey would be present in Santa Cruz on the 11th and Santa Barbara on the 13th, and is presumed to continue through October. I think it's pretty well established that he was drumming for the Fall 1974 East Coast tour, though truth be told I have never seen a shred of hard contemporary evidence for that. It's "understood". I don't doubt it, but wouldn't it be funny if Jim Nelson were really the drummer in some of these slots?

! Recording: symbols: % = recording discontinuity; / = clipped song; // = cut song; ... = fade in/out; # = truncated timing; [ ] = recorded event time. The recorded event time immediately after the song or item name is an attempt at getting the "real" time of the event. So, a timing of [x:xx] right after a song title is an attempt to say how long the song really was, as represented on this recording

! historical: Three points of historical interest. 1) Louis Falanga's onstage audience tapes are great documents. 2) Lots of interesting material including, here, some great jazz ("Valdez In The Country", "People Make The World Go Round", "Freedom Jazz Dance", and great rare (in the Garciaverse) Motown, "Ain't No Mountain High Enough". 3) personnel: Bill Kreutzmann had been drumming with JGMS since about November 1973, by my reckoning, and then, after 9/2/74, JGMS goes in another direction. Here we have Jim Nelson on a tryout, it would seem. Paul Humphrey would be present in Santa Cruz on the 11th, BCT on the 12th, and Santa Barbara on the 13th, and is presumed to continue through October. I think it's pretty well established that he was drumming for the Fall 1974 East Coast tour, though truth be told I have never seen a shred of hard contemporary evidence for that. It's "understood".

! personnel: Betty's reel notes that this is Jim Nelson on drums! I note lots of hi-hat, lots of quick stuff, and find that in general this guy is great, even as the group tries to learn how to play together. It's not entirely successful, but it is super-interesting.

! R: field recording location: onstage from stage left/house right. The sought-for setup would have been seated at Garcia's feet, one mic pointed into his stage monitor and one mic aimed at the rest of the band.

! R: Utterly breathtaking. The vocals are nearly inaudible. We are getting them direct from Jerry's mouth from about 8-10 feet away or whatever, with no amplification. But Garcia's guitar is crystal-clear: this is the best example so far of the technique that Falanga and/or Menke used for these tapes, which was to directly mic Jerry's stage monitor and point another mic toward the center of the stage soundfield. His guitar has incredible tone and volume. The bass is also pretty loud and direct-sounding. Is it possible that what we are hearing is a kind of monitor mix for Jerry? Sorry, summing up: guitar and bass crystal clear and loud, drums real nicely present, keys and horns real low in the mix.

! P: s1t02 VITC Martin takes the first solo, and he is blowing beautifully. This song really suits him. Do we know whether it was him who brought it in to the band? The little thing Jerry and the drummer get together in the 11-min mark is really interesting. The drummer is doing some syncopated percussive stuff with one hand and a nice tight snare in the other. And Jerry really seems to respond. He's noodling low, but check right at the start of the 11-minute mark for some really, really gorgeous musical ideas from the Great Barcia.

! setlist: s1t03 Space is well-placed here. This is completely unmoored from the song, Valdez In The Country, out of which it oozed.

! s1t04 PMTWGR This version is absolutely classic, just how you want it to be: Kahn announces and starts it. Garcia swoops in @ 0:48 with the roundabout strumming he does in this tune ... but Merl wants to keep it spaced out for awhile, and I gotta say the drummer is right there with him. And who is Garcia to say no to some noodly weirdness? Thet let it bounce around for a minute or so, Garcia coming back to his strum @ 1:48, then Merl joins in with the melody. It's really, really nice because it's still really echoey and vibey, Merl using lots of reverb patience. Then the splice, though, and we are winding up. And we don't know what we are missing. Could have been legendary!

! s1t05 Road Runner again shows the distinctive style of the drummer, Jim Nelson. Not so much high-hat here, but lots of quick, tight rolls. Guy can hit, all right, and these Holland/Dozier/Holland rollers are presumably pretty well encoded in all the players' respective hardwiring.

! s1t05 (1) @ 11:29 Nelson (presumed): "You guys are treating me rough, man." I think that's Jim Nelson speaking, and he's probably referring to them throwing him out there with a bunch of songs and just telling him to keep up! That's how it sounds to me, anyway.

! P: s2t02 There is some really grungy stuff happening off the keyboards, or is it saxophone? at the start of Tough Mama. Can't tell if someone's trying to get some of that, or if it's a bad cable somewhere. Goes away by 1:20. Jerry's vocals are also more audible on the tape here than they had been at the start of set I. Tough Mama gets a little loose for awhile toward the end. They are working on it.

! P: s2t03 old note: "I think they keep trying to end FJD, but they keep forgetting to tell the drummer." new note: That said, this FJD is profoundly interesting to me. I think this is outstanding. Yes, they should have ended it at 12:04. Everything from that point is a little wonky. Though the drummer is super-interesting, they just are not together 12:04ff. Try to end again 12:50, he misses it. OK! They all decide to do some stuff, Jerry playing some realyl plucky 13, Merl does a real nice run 13:08ff, very nice job Merl! Goes high 13:25, Jerry glassy sraping chunking behind him, Merl swirling up some goodies 13:45. Martin adding percussion 14:01. Then they hit it 14:42, so it was just those two misses in the 12 minute range, and then they made some lemonade with them in any case. Very good.

! P: s2t05 ANMHE amazing to hear this. Great energy. Martin misses once early on, things are a little loose in terms of arrangement, but this has a great groove! 4:30 it is driving beautifully and Garcia does some incredible guitar work, splashy long threads on top of some killer rhythm with an amazing piece of American music at his fingertips. Great. Listen to Nelson drum 5:38! They pull a little minor decay to signal end ... I could have stood for it to go a little longer ... they let it melt and decay, lots of reverb, echoey space, closes to the echo that becomes HSII. Nice!
Posted by Fate Music at 10:26 2 comments: