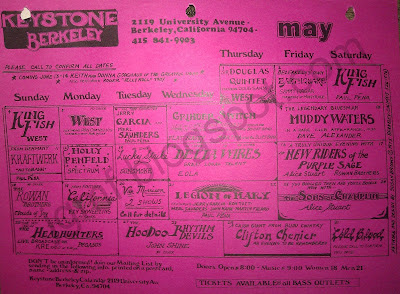 The Keystone Berkeley calendar for May 1975 lists quite an astonishing, amazing set of shows. For blog and List purposes, I post to note Jerry Garcia and Merl Saunders on Tuesday, May 6, 1975, heretofore unknown to me.

I am not sure what to make of the May 23rd listing. There are tapes of Legion at Keystone May 21-22, 1975. TJS has a listing for May 23rd, but this calendar shows Sons of Champlin and Alice Stuart. Thoughts?

Also note the coming attraction of Keith and Donna Band at the top left. I list Heros and Osiris as the opening acts for those shows (respectively, June 13 and June 14, 1975). Was Roger "Jellyroll" Troy associated with either of those groups, or did something change between the ca. late April compilation of this calendar and the actual event? I wish I could learn more about ol' Jellyroll.


I hadn't seen this one before. It includes information on two previously unlisted Jerry Garcia-Merl Saunders gigs, on Tuesday-Wednesday, January 21-22, 1975, at Keystone, 2119 University Avenue in Berkeley.

Also includes a couple of Howard Wales gigs, information on opening acts for Kingfish on 1/24-25, and a little notice in the middle: Coming Soon to Keystone Berkeley, March 1 & 2: Legion of Mary: Jerry Garcia-Merl Saunders-John Kahn-Ron Tutt-Martin Fierro. I have elsewhere asserted that this is the first documented instance of the use of the Legion of Mary moniker, though an eyewitness to the Eugene show on 12/15/74 remembers them being billed as LOM.

Summertime in January: The Merle [sic] Saunders Experience, January 15, 1973 at the Inn of the Beginning

Rex Jackson wrote the band name as " Merle [sic] Saunders Experience" on his tape boxes for this night, FWIW.

Among the Inn of the Beginning materials [JGMF | COAU] I unearthed last summer were ledgers indicating shows by Garcia-Saunders on January 14-15, 1973, only the latter of which had previously been known (from Betty Cantor-Jackson recordings). I have just finished revisiting 1/15/73 after a number of years away from it. It's always hard for me to know how highly correlated my various listenings are, how much of my reaction has to do with me (and my setting) as opposed to what's actually on the tapes.

In this case, I enjoyed this very much, bad sonic anomalies notwithstanding. But I don't really have all that much to say about it. Some of my favorite songs appear here --Hi-Heel Sneakers, Expressway, I Was Made To Love Her-- but, I dunno, just not much to say. There are lots of old chestnuts in here, including a pretty scorching Summertime and a ton of Motown and R&B. Anyway, in lieu of lots of analysis, just some notes.

! R: Source: "MSR > P > D. Transfer: D > cdr > eac > shn by Katy Miller. Contact:ryktjos@msn.com." She was a good source of novel material very early in the CD-to-lossless era of Garcia collecting. I am not sure why there's a PCM generation listed here. That would normally indicate that this came out of the second Betty Batch (via, e.g., Dougal Donaldson). But I had thought these were Third Betty Batch tapes rescued by RE. I need to clarify this. As the notations indicate, there seem to be two-second gaps at every track marker, as if somewhere along the lines there was a "Track at Once" (TAO) CD copy, or possibly sector boundary errors (SBEs). There are so many warts on the recording, I didn't dare get further under the hood, e.g., by trying to get rid of these gaps.

! R: Seeder notes: "This is one of the shows discovered in the Betty Cantor auction."

! R: s1t01 HHS cuts in near the start with severe mix problems. Only the guitar is directly audible through, with the vocals for the first two verses merely an echo. Bass @ 3:30 and a touch of organ and drums toward 4-min mark. Drums in @ 4:05, moving around. Things become nearly inaudible from 7:50-end. The guitar is low in the mix for the start of ETYH, starts coming in a little better around 3:45, which is also when Sarah's mic comes up a little bit.

! Personnel: Sarah Fulcher is here, in what was probably only her second performance with Jerry et al. She sings on almost every number.

! song: s1t04 "Find A Rainbow" (Allan). Nothing is really known about this song. Maybe it was a Fulcher original?

! P: s1t05 GOMM @ 6:40 Merl does a tasteful little solo, synth or electric piano, while Sarah laughs and lightly moans. In the late 10-minute mark into the 11-min mark, John Kahn takes some beautiful leads, Garcia and Merl comping behind him. JG solo 11:52, some pulling whale crying right at the start, until around 12:00.

! s2t02 (4) Sarah: "If it's possible, could somebody bring some apple juice and beer to the bandstand?

! s2t04 @ 5:33 (6) One of the players: "Hey Steve, I think my parking meter on my car's expired." Someone says "Saw it off", and Garcia says "Yeah, run out there and saw it off." Loose stage goofiness. @ 5:54, Garcia starts strumming Summertime. Guys start joining in. Someone says "How 'bout we do a slooowww blues." Jerry starts digging in a little deeper with Summertime, at 6:34 he calls it, and off we go.

! P: s2t05 Summertime Sarah vocals: "Your daddy's rich and your mom is good lookin'." Merl very promising entry @ track 12:14, ca. five and a half minutes into Summertime. He doesn't really bring it in the second measure of his solo after coming in strong. After a minute, around 6:30, Garcia lays down some whole paragraphs, and at 7:00 he is finding some sharply bent spaces, Sarah exclaiming, and then some sharp, glassy feedback. At 8 minutes in, Sarah starts doing a little little thing and Garcia digs in, comping behind her, and they hit a nice groove, but her scat at 8:30 falls a little flat. Into the 9-minute mark she has some nice improv singing going in, Vitt joins in right nice at 9:15, picks her up, and now everyone is fucking cooking, with Bill Vitt just bashing and everything on key. In the late 9-min mark Jerry leads them back home and John locks in with him to get back to melody.

! P: s2t06 Jerry suggests TAM to Sarah. Sounds like he is singing it right at her. Steps back in his black t-shirt and cowboy boots and plays his guitar for her. He sounds a little bit like a sloppy puppy dog, but he is definitely getting an A for effort. After the stumble around for most of the song, Garcia wisely takes charge in bringing TAM to a close. I think Sarah could have kept going.

! s2t07 (7) JG: "Everybody has to send their beer to the bar, but we can still do another tune." They are deliberating what to play. Somebody yells "Hey Sarah."