update note 20150517: I find it hard to update posts once I make them, too little time and all that. In any case, I think I have learned the following things.

First, the Dead shows advertised for the Psychedelic Supermarket in Boston on December 1-2, 1967 ended up canceled. Is that right?

Second, per commenter Bob E, who ran the show, the GD played Clark University at 2:30 in the afternoon on Saturday, December 9th. This, BTW, is a well-scoring dart for Corry Arnold, who more or less called it at Lost Live Dead, what was lost is found and all that. I hope Bob E. can answer more questions about that gig - was it Atwood Hall? What was the room capacity? How many attended? All that! I assume there is coverage in the campus newspaper, maybe stuff in the University archives. 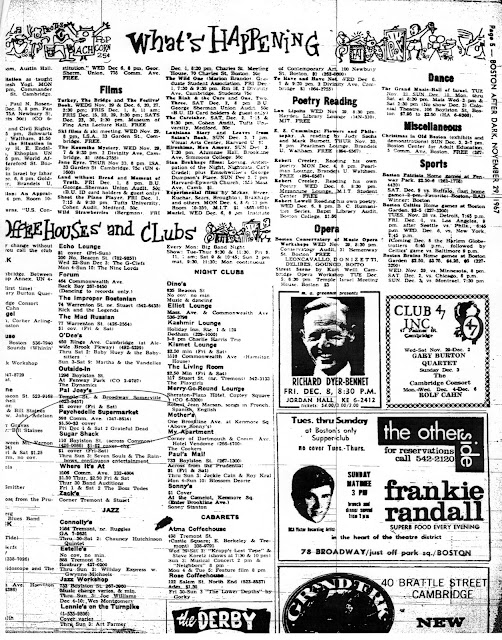 Corry has posted on GD shows at the Psychedelic Supermarket on December 8-9, 1967. Makes sense they'd try to do consecutive weekends if they were out east, and developing a new base in Boston might have been more attractive than building what was probably already a solid base in NYC, the ongoing "Rise of the East Coast Deadhead".

In my original post here, I noted Corry's speculation on a December '67 Dead show at Clark U. possibly on 12/2, which turns out to have happened on 12/9. I have no idea if that still relates to canceled Boston shows on 12/1-2 other than as color following, but that's cool, too.

Let me close with an appeal. The San Francisco Public Library has the amazing combination of true grit American metropolis reality with the finest state-of-the-art digital scanners in the world which make research there a breeze. San Diego Public Library is looking up.

The Boston Public Library is an American gem, as much as the great public libraries across the country, but when I was there in 2011 and made this post, it hosted only one digital microfilm scanner. Some Boston Deadhead ought to patronize the place and buy 'em a bank of digital scanners to get after the Boston After Dark and all the rest of them.

In 2011,  in my original post, I said "Humanity is on the brink of losing untold information that still lives on paper and microfilm" and "I hope someone has it in their plans to digitize the Underground Newspaper microfilm collection." I gather now that a project to digitize and make public that important collection, improved and upgraded (i.e., perhaps freshly scanned?), OCRd, is underway. Hooray!

Hippies who made bundles have a special responsibility not to play to the type of what some colleagues of mine are writing as "The Greediest Generation". Help the BPL out, if you can spare it in these parlous times.
Posted by JGMF at 00:24