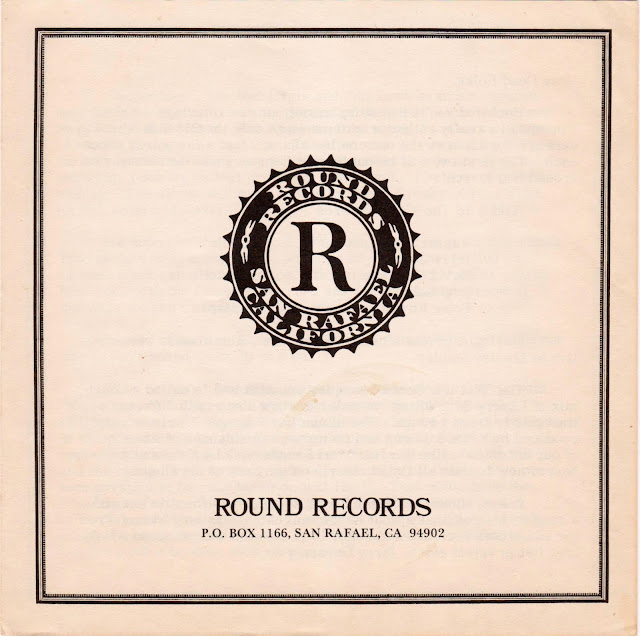 Email ThisBlogThis!Share to TwitterShare to FacebookShare to Pinterest
Labels: Round Records

Email ThisBlogThis!Share to TwitterShare to FacebookShare to Pinterest
Labels: JG-host

The interview is given as 1975, at least some of it takes place at His Master's Wheels, and there's a snippet with Nicky Hopkins. I have Jerry and Nicky et al. there working on what would become Reflections mostly in September-October 1975, so this seems the most likely timeframe.

Here's a list of all known-to-me performances by Old And In The Way. It includes a few rehearsals and a handful of studio dates, but is mostly live gigs (N=49). Date-venue combos that show up twice indicate early and late shows. This info is in my spreadsheets (as is all kinds of other stuff), but for ease of presentation as a document I didn't include it here.

Comments and all that most welcomed!

Email ThisBlogThis!Share to TwitterShare to FacebookShare to Pinterest
Labels: 1973, 1974, OAITW

Someone mentioned this at LL, new to me, thought I'd bring it here.


I love the image above, of the Warfield marquee reading just "Jerry" for the March 9, 1994 JGB show, because, assuming his last name is not photoshopped out, it speaks to who Jerry had become by the last year of his life. In the Bamana language of the Mandé culture of West Africa, he had become a tògòtigi - "proprietor of his own name" (Skinner 2004, 157). "In Mandé social thought," musicologist Ryan Skinner has elaborated,


the purpose of these acts of self-making is to make a name for oneself (ka tògò sòrò, literally “to find one’s name”) and become what people call a tògòtigi, or an individual who is the owner (tigi) of his or her given name (tògò)".  Malian literary critic and cultural theorist Chérif Keïta summarizes that "The togo is the axis of individuality and desire for personal distinction" (Skinner 2015a, 22).

The concept applies across artistic fields in the Mandé world, especially among griots "expert hereditary professional" (Dubois 2016, 32) storytellers --musicians, poets and artists-- charged with carrying forward the collective knowledge embodied especially in the oral tradition (but see Chérif Keïta 2005). In the musical realm,


the artist who improvises a running solo, incites the dance with a syncopated rhythm, and makes his instrument sing with a novel melody asserts his dynamic and creative agency as a performer. He claims his individuality, a distinctive subjectivity symbolized by his first name, or tògò, and the status and identity of being a tògòtigi the achieved state of making a name for oneself, of being an owner (tigi) of one's name (tògòtigi ) ... There is an existential risk in such acts of musical distinction and innovation (Skinner 2015a, 88).

Anyway, not that, in certain circles, people didn't know who just-Jerry was before 3/9/94, but I have always loved this marquee for capturing it, the culmination of the name-claiming journey which began on a seasonal May day in 1968, when the name "Jerry Garcia" appeared on a sheet of paper billing a musical event for the first time since the formation of the Warlocks. Over decades of gradual assertion and musical differentiation, and eventual commodification, he had successfully made his name. That progression is probably the main arc of Fate Music, where I'll get into it hopefully more artfully and definitely at greater length.

The show is off-pattern in a few other ways. First, it was a single-shot on a Wednesday night. While midweek Warfield gigs were not unheard of, they almost always took the form of multinight runs. Indeed, though I have not gone and checked, I can't think of another Warfield one-off like this one in the Wolfgang-Warfield era (December 1989-April 1995). Second, the handbill is especially lame. 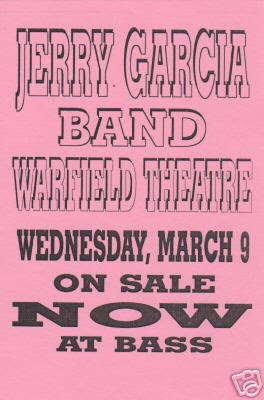 I wonder if this show was pinned down late, and/or if ticket sales were slow, or if BGP was just on a tight budget, but this is about as basic as it ever got.

Third, as to the show, it's fine, but what jumps out at me is that there is not a single Garcia-Hunter original here - it's all covers. Jerrygarcia.com makes this relatively easy to see, since the originals have hyperlinks and the covers do not. I spun through '93-'95, I think, and didn't see any other shows without at least a "Deal" or a "Run For the Roses" or something else. If I find time and motivation I might dig deeper, though I understand that this has no particular importance, it's just a curiosity. But it's a Garciaverse curiosity, which is kind of the bread and butter of JGMF, so there you go.

An hour first set was just about what he seemed to be going for, and 75+ minute second set is nothing to sneeze at. Chuck Vasseur pulled a typically great tape. The performance is fine, all pluck and less fire, which was his style at the time (no onion on his belt, as far as I know). Donny does some nice hard trapping in Don't Let Go, and everyone sounds just fine. Well, John doesn't "sound" much at all, but that was pretty much par for the course in this timeframe, too, and it's all good by me.

Listening notes below the fold.