One of the things that I expect will become possible at some point is to get some relatively valid data on set times across the years. One of the reasons I try to be so precise with my timing notations is that I am going to want to train a machine to parse song, set and show timings from my listening notes. The data will still be noisy and need cleaning, but the basic idea is solid.

Case in point, two ca. 50 minute sets on October 1, 1983 in John Kahn's old 'hood. Nothing offensive, but we are definitely sliding down toward the Minelli Line of 45 minutes. We are on the road to Rock Bottom. It'll be a pretty timeseries graph at some point. In my mind, this also connects to the fact that, as I only recently came to understand, this show, and the shows around it, were makeups for the shows canceled in August, a month which laid Jerry low more than once. 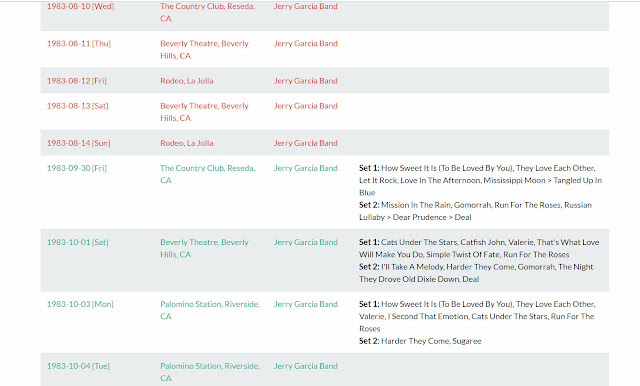 Deadbase said that the August shows were canceled because Jerry had an infected foot. I know from photographic evidence that he was suffering from edema a year later, and by this point edema, or sores, or goodness-knows-what could have been possible. But, heck, maybe he stubbed his toe or stepped on a tack while doing his calesthenics - what do I know? Anyway, him canceling August shows for health reasons definitely holds historical resonance, and then seeing the makeup gigs clocking in a little short -- not the only time Beverly Hills would experience this -- all feels narratively consistent.

A few other quickies while I have the table in front of me. First, some of those August dates are a little sketchy to me. The ads and listings and such were a little all over the map. Check 'em out at Jerrybase if you are so inclined. Second, same goes with 10/4/83. I am not sure about it. Third, more San Diego cancellations. That down was filthy with 'em in the Garciaverse. Fourth, Palomino Station in Riverside strikes me, prima facie, as a potentially interesting dive bar. I don't know anything about it, but it screams downmarket to me. It ain't the Beverly, of that I feel pretty confident.

Anyway, 10/1/83 listening notes: I like the atmospheric aud pull by Joe Pinedo, very ambient and showing off the ragged seams of the pause button and 45 minute tape sides. The show is probably a little below average for the period, or maybe average The Cats is peppy, the Catfish John is awesome, and in TWLWMYD Kemper does some syncopated splashing that resets my pulse. Kemper plays very well throughout. There's no "Don't Let Go" or "Rhapsody In Red", which were pretty much necessary if not sufficient elements of a great '83 Jerry Band show, and the whole thing just never really goes BOOM. But YMMV.

Listening note after the jump.

The JERRY GARCIA Band
Prior to fall of 1975, Garcia's side bands had mostly a) been relatively loose aggregations and/or b) not had his name on the marquee. All of this preserved a kind of informal quality, maybe some plausible deniability, a little bit little less spotlight to go with his insatiable appetite for gigging. "More music [than the Dead afforded him the opportunity to play], less bullshit [than naturally went along with the Dead, and especially with being Jerry Garcia Of The Grateful Dead]" summarizes the Garcia On The Side formula.
Putting his name on the band may have been necessary to sell more tickets, but it implied some kind of ownership / leadership / responsibility, which can all be a hassle, and also killed any shot at anonymity. With the advent of the JGB, every regular band he would ever play in again would bear his name, with the sole exception of 1979's Reconstruction. Now, Garcia being Garcia, he attenuated his ownership by forming JGB as a DBA partnership with bassist and old pal John Kahn and drummer Ronnie Tutt, eschewed leadership by making piano man Nicky Hopkins talk to the audience, and presumably shirked as much "responsibility" as possible by, well, being Jerry.
The Jerry Garcia Band existed in many permutations from 1975-1995, but just about all of them played their first live gigs off the beaten path, on non-weekend nights, or both. JGB #1 established the pattern, debuting Thursday September 18, 1975 in Palo Alto, repeatedly playing tiny River City in Fairfax (including a Sunday and Thursday, as well as a Saturday), and hitting Crabshaw Corner in distant Sacramento, and snagging one bigger payday at a local community college on Friday, October 10th before a Saturday-Sunday debut at homebase, Fred Herrera's Keystone Berkeley. It wasn't big, official capacity of 476, but the audience was the core one that'd keep Garcia in Camels for almost another decade. JGB would play Keystone Berkeley 100 times, according to Jerrybase, which through m0thra's programming wizardry now lets you create a short URL for this kind of search result. (As currently configured, we cannot filter out cancellations. So there are 106 results, and I hand-counted six cancellations. A nice, perfect, pleasing, round 100 results.)

Personnel
This being JGB #1, Nicky Hopkins forms a special point of focus, but of additional interest about October 11-12, 1975 (about which Corry has written) is the presence of a second keyboard player, with Muscle Shoals session man Tim Henson on electric. Henson had already broken in on October 8th for two shows [early | late] in Santa Cruz and played another show on the 9th in Fairfax, skipping Friday the 10th for reasons unknown, so these Berkeley gigs represent his fourth and fifth (and, it seems final) appearances with the Garcia Band, ending what Selvin referred to as a tryout. At times he produces organ sounds, I think I also hear some synth (10/11/75 "No Time", about 1:30 in), but others with better ears should weigh in. Further information is patchy (see here, here, and here for some), but I think Henson would return to Alabama before either ending his own life or being murdered on Christmas Eve, 1977.
A second guest shows up a Saturday night, a guitarist whom Nicky introduces as Mike Godman. I can't really hear him distinctly, and it's possible I am not hearing him at all, as the electric keys deliver a range of sounds. And we can't even be sure that Mike Godman is his name, recalling that Nicky misnamed Tim as "Hensley". I have worked my Google-fu around various permutations of Mikes and Michaels with a variety of proximate family names such as Godwin, Goodwin, Goodman, but I have come up completely dry.
So, on these guests, two request of my faithful readers.
1. Can you please tell me what Tim Henson is playing? Is there electric piano, organ and synth?
2. If you learn anything about Mike Godman, please post in comments.
Randomalia
The band noodles around a few interesting nuggets, such as "Teddy Bear's Picnic" and "Waltzing Matilda".
Introducing "Crazy Arms" on the first night, Nicky credits some of his boogie-woogie piano influences: Albert Ammons, Meade Lux Lewis, Pete Johnson, and Big Maceo Merriweather.
"Edward" is an awesome tune. It would stretch out more over the next few months, and often segue into "Let's Spend The Night Together", but here it stands alone as the show-closer.
Nicky is slurring some here, though not as much as he would in November and December. I have noted that the Garcia Band contract rider included a pint of Cuervo Especial dark tequila in this timeframe, snarking that it probably lasted him through soundcheck.
Nicky mentions his giant mirror, about which Corry has written.
Nicky is a stone-cold piano virtuoso, laying down golden licks all weekend. His composition "Pig's Boogie", written for his orange tabby and which on 10/11 features some awesome boogy bass walking by John Kahn, is a keeper, as is the solo instrumental ballad "Lady Sleeps". His other original, "No Time", suffers from Hopkins's vocal limitations and maudlin lyrics, which nevertheless combine to affect me, actually. Nicky was enduring a difficult period here - not only with his overall health and his heavy drinking and drugging, but also financially. His record label (Mercury) was hassling him, something which he mentions from stage with JGB at Concord Pavilion on October 17, 1975, and perhaps not unrelated, the night before this Saturday gig, on Friday October 10th, he and Dolly went into default on their Mill Valley home. So hearing the man earnestly sing these lyrics (credited to Dolly) with his fragile voice, in a kind of session man's lament, actually really works for me.
No Time
Lyrics: Dolly Hopkins
Music: Nicky Hopkins
Got no time to waste my life
Got no time to play the game
Life can be such a tragedy
And to you all players are the same
Got no time to live in dreams
That's all you've left me with it seems
Wasted too much time in doing things for you
I don't believe you know lies from truth
Now that it's gone
Just how long
Until I find
A place in life
Where I can find myself
And rest my weary mind
You know that music says it all
Some hasty climbers have to fall
In admiring greatness we can rise again
The world can't see its greatest man
Can't play alone
Been too long
Now I must find
Another key
To help me say the things I feel
And hope it helps someone to see
This time the band should get it on
We've played in shadows far too long
It's time for us to believe in what we do
If we want anyone else to
Consider every day as [bluest] day of life
Admiring greatness there's the chance to rise
Anyway, below the fold, you will find raw listening notes for several filesets, with lots more tiny bits and pieces.
LN jg1975-10-11.jgb.all.sbd-minches.31213.flac1644
LN jg1975-10-11.jgb.all.mtx-motb-0113.105413.flac1644
LN jg1975-10-12.jgb.all.aud-menke-falanga.7669.shn2flac
LN jg1975-10-12.jgb.s1-1.sbd-menke-smith.134658.flac1644
Read more »
Posted by JGMF at 16:06 10 comments:

Wiki says John Lennon's "Imagine" was released on October 11, 1971. Yet Garcia and Saunders played it on September 24, 1971. Corry has explained that release dates are a little fuzzy, but can someone narrate how Merl Jr. would have had the record to play some time before 9/24? (He says he was playing it in his room over and over, the guys heard it, liked it, and worked it up.)

JGMF on Tales From the Golden Road

Dear readers, David Gans and Gary Lambert will be hosting yours truly on "Tales From the Golden Road" on the SiriusXM GD channel today at 5 PM eastern, to talk about the topics you know well from the site and, especially, Jerrybase! m0thra and I keep working the site, lots more features, new data, eye candy and more to come!

Call or email goldenroad@siriusxm.com or visit their Facebook page at https://www.facebook.com/tftgr. Phone in live to 888-897-4748.
BTW, the partnership for the site was born in comments here, somewhere. I noted I didn't handy way to work with GOTS setlist data, LIA gently chastised me for not having gotten that shit together, m0thra volunteered to help, and the rest is history. If anyone can link me to that discussion, as the uhr moment for Jerrybase, I'd be grateful!
(Of course, it could have been at one of the other blogs, I dunno.)
update: here it is! I had said "I don't really have the data I'd need to map song debuts."
On April 18, LIA replies

Really? This is alarming. Being able to find when Garcia played songs seems like a basic necessity for Garcia scholars! But there currently seems no way to conveniently search this stuff online, short of looking through all the setlists. Someone needs to put together a song database for Garcia's repertoire.

I say I probably have the data for it, m0thra offers his services, which really are a form of white magic, and off we went.
Posted by JGMF at 10:48 No comments: