! historical: "More than 30 persons, most of them from North Jersey and New York, were arrested Saturday night and early yesterday morning" after the Garcia Band shows ("Arrests Follow 2 Rock Concerts"). 22 police. Crowd of 250-300 (per police) gather at Bradley Park, across Ocean Avenue from Convention Hall, about 6:30 pm. Drinking. Cops announce they're gonna bust the drinking, etc. over the bullhorn. Crowd mostly dispersed 7:30, when JGB scheduled to start. Arrests begin at 10:30 pm, after the early show. "Police arrested people as they came off the Boardwalk and were visibly intoxicated. The arrests continued until about 1:25 am [text not clear]". Most was possession of alcohol, maybe 28? That'd be a summons or $100 bail. Nine for possession of marijuana or LSD, $500 bail. One Prince Charming got three charges and $5,000 bail: possession of a large knife, assault and battery of a police officer, and resisting arrest. (Your mother will love him!) Wage: $20,557. Only 120 tickets shy of a sellout (3,776 of 3,896).

! R: the video and audio quality are breathtaking.

! P: MM KG has baritone and Tutt has high parts. KG's voice is unfortunate. Nice solo over 30, Kahn hitting some nice fat stuff and there's a crowd shot of a dude right upfront reacting to it, probably same look I had on my face. Wow. Late 30 Jerry takes another turn, he wasn't satisfied with the first one (it's true he hit a bad note in there), now he has his eyes closed and that helps, sometimes.

! P: RL wow. We know that Jerry, John and Keith, sometimes just Jerry and Keith (!), played some Hot Club stuff at Club Front in mid-1978. The love that Jerry and John share for each other is palpable. Over 43 John is practically cooing at Jerry, playing with him like a kitten, and Jerry is using that to get off. It's potent. At 45, John steps in front of Jerry and is ready to jump on a feature, but Keith steps up and plays a beautiful little thing. Jerry sways with pleasure and smiles at Keith, comping with his eyes on Keith. If Garcia's comping and looking at you and urging you to play, you play, by God. 46 Keith picks up his tempo a little bit. He's playing very well-controlled piano here, not so heavily percussive on the left hand. Now John feature 47:15 ff. At 48:45 you are getting a perfect view of John's fingers. It is very nice to see this, but I don't think this bass solo holds a candle to what some of John's contemporaries could do. Garcia is having a smoke and watching John, so it's a little trio configuration of John leading, Keith and Ronnie just holding the beat. Jerry comes back 50:35, crowd gives John a nice hand. But it also knows, or many of its members do, that Garcia's about to play his guitar.

! P: TUOY John was playing something very interesting around 70 min mark, but the seeder had already tracked KOHD. I think he was noodling something else, and then the transition to KOHD sounded abrupt. But maybe I just wasn't playing close enough attention.
Posted by Fate Music at 11/20/2017 04:54:00 PM 1 comment:


I have been processing information from contracts filed at the American Federation of Musicians (AFM) Local No. 6 in San Francisco.

There is nothing representative about these – I have information on stuff that is a degree or two from Garcia, and a few other random tidbits of idiosyncratic interest to me. I post them mostly for future researchers who might be interested. (The six-digit numbers just reference my scans, so I can retrieve these as needed.) List after the jump.

I have always liked this image. 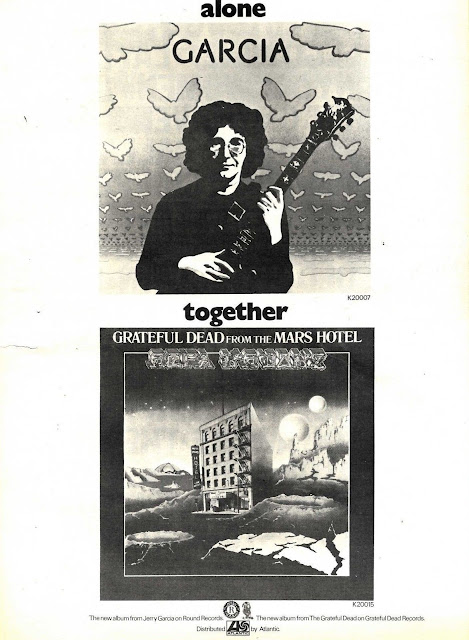 Email ThisBlogThis!Share to TwitterShare to FacebookShare to Pinterest
Labels: Round Records

Picture of the Murdering Punks at the Inn

A little piece in the from the Santa Rosa Press-Democrat on the tenth anniversary of the Inn of the Beginning in Cotati notes that "A picture spread in the Pacific Sun featured Jerry Garcia and the New Riders of the Purple Sage playing there in their early days". Great - now I *have* to track that down.