Will The Circle Be Unbroken: The Dead and the Allmans, Sunday, May 10, 1970, Atlanta Sports Arena, Atlanta, GA

As Corry has so often noted at Lost Live Dead, in 1970 the GD were still a hand-to-mouth band, touring hard. If we include NRPS gigs as separate, I do believe 1970 would be Garcia's most prolific onstage year.

Anyway, I guess I'd take the overnight from Worcester, MA on May 9, 1970 to Atlanta, GA on Sunday the 10th (Mother's Day, I think, FWIW) as a sure sign of a band that is trying to pack in the paying gigs.

Not much is known about this Atlanta show, for which no tape is known to exist (at least not to me). Here's what Deadlists has to say about this show:


According to Barry Welch, who attended the concert, it was announced before the show that TWA had failed to deliver the band's equipment and they were going to borrow the Allman Bros' gear, and first the Allmans would play a set, and then the Dead would play a set, and then they'd Jam together. According to Chris Cole who attended this show it was an afternoon show and among the tunes played were Hard To Handle and The Other One. The Dead Jammed with the Allmans during the Allmans' set as well. DeadBase IX lists a Mama Tried and a Will The Circle Be Unbroken, the latter with the Allman Bros.

I had a chance to peruse a few issues of the great Atlanta counterculture Great Speckled Bird, and can report a few things based on a review by Miller Francis, Jr. in the May 18, 1970 issue (p. 7). 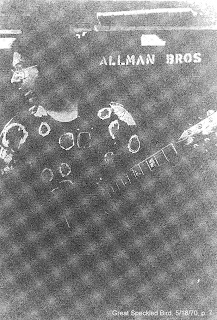 What's so great about this picture is the stenciling on the equipment, giving really nice confirmation to the equipment aspects of the story. That's some shirt ol' Jer is sporting, too. The photog was Bill Fibben.

Anyway, here are some of the key quotes from the review:


This account makes me think that Deadbase IX had some information from the GSB review, given the Mama Tried and Will The Circle Be Unbroken information.

I also wanted to display some of the other visual data surrounding this show, so here goes. First, the ticket stub:

Here's an ad from Great Speckled Bird, May 4, 1970, p. 21. Love that they were already the good ol' GD in mid-1970 in a town they had played what, once? Probably some other nice Atlanta vibe in the rest of the information. 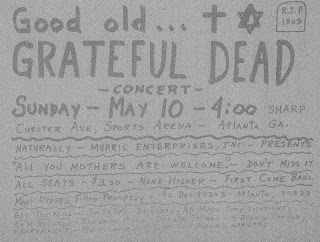 Here's a second ad from a week later (press day one day after the show, in fact: Great Speckled Bird, May 11, 1970, p. 20) with some slightly different wording and which identifies the Hampton Grease Band as the opening act. 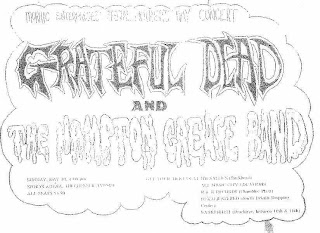 At the risk of being presumptuous, let me try to summarize my analysis of this show in the form of a draft revised Deadlists entry. As you can see, I am leaning toward the conclusion that the blurred lines of the acts and the possible fog of time lead me to discount the memories of a separate AB set, and to prioritize the non-mention in the contemporary source. That's debatable, for sure.

Hard To Handle;
The Other One;
Mama Tried;
Will The Circle Be Unbroken.

Comments: scheduled 4 p.m. start time. Hampton Grease Band opened. The Grateful Dead played on equipment borrowed from the Allman Brothers. This is supported by three pieces of evidence. First, Barry Welch, who attended the concert, recalls a preshow announcement that TWA had failed to deliver the band's equipment and that this would be the remedy! Second, a contemporary show review (Miller Francis Jr., Great Speckled Bird, May 18, 1970, p. 7) confirms this, adding the detail that the gear is in Boston, consistent with GD being in Worcester, MA the night before, which we know to be true. And, third, the Miller review is accompanied by a photo of Garcia playing in front of a stack of Allman Brothers amps.

A clear understanding of who performed is a little bit elusive. Previous Deadlists entries, based on information from Welch, noted that there was an announcement that the billing would be as follows: 1) Allman Brothers set; 2) Grateful Dead set; 3) GD/Allmans jam. (Such a jam would have reprised one in Piedmont Park, also in Atlanta, from July 7, 1969.) It is not clear from the information as given whether this announcement was made from the stage, previous to the show over the radio, or otherwise. A second attendee, Chris Cole, confirms the afternoon start time and has been credited at Deadlists with the recollection that "The Dead Jammed with the Allmans during the Allmans' set as well." This would seem to conform roughly to the layout above. No prior information has listed the Hampton Grease Band, which featured in late advertisements for the show and was discussd in the Miller review. There may be some doubts about whether there was a separate Allman Brothers set, based on the following. The GSB review by Miller Francis references an "announcement by Ed Shane that the Allman Brothers were present and would jam with the Grateful Dead." But it doesn't mention a separate Allman Brothers set. It seems extremely likely that this review would have mentioned a separate Allman Brothers set if it had been announced and a fortiori if it had happened. This guy and this paper seemed close to the Atlanta music scene and seemed very serious about the AB. It mentions Duane Allman, Greg Allman, Berry Oakley and Butch Trucks coming onto stage and it mentions "an incredible, unbelievable, destroying Southern hymn played by the Grateful Dead and the Allman Brothers Band, 'Will The Circle Be Unbroken'". But no mention of an AB set. One guess is that there was no separate AB set, that the order was 1) Hampton Grease Band; 2) GD; 3) GD + AB.

Regarding the setlist, Cole recalls Hard to Handle and The Other One. The Francis review mentions Mama Tried. For those three songs, we cannot know on present information whether Allman Brothers were onstage. Francis does mention Will The Circle Be Unbroken as Grateful Dead plus Allman Brothers.

There is more information at data at Jerry Garcia's Middle Finger.