Next up on Sunday evening is Skunk Cabbage, a local bluegrass band. On a cursory scan through Google Images I wasn't able to get a picture of this act, so I scanned one out of the concert program. 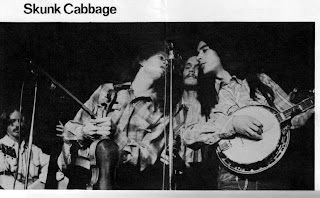 At some point I will have lots to say about this band, which is apparently not related to this Skunk Cabbage in Vancouver, BC. There's very little that I find online upon a quick glance, so it'll be nice to lay down that marker.
Let me for now just drop two things. First, Vassar used to play with them a bit. One of the SK players told me that Vassar first sat in with them the day after the last OAITW show. Except for the reunion at the GSCBF, the latest known OAITW show was November 4, 1973 at Sonoma State College, so the date in question would have been Nov. 5th. Anyway, it seems this was quite a regular thing and it is an interesting connection. Second, GSCBF co-organizer Judy Lammers was SK's manager at the time. This partly explains why SK got such a sweet, prime-time slot in the festival schedule. Again, I plan on trying to learn more and making a future post just on Skunk Cabbage.

OK, here's what I note about their set at the GSCBF. My own ignorance explains why I don't know the names/instruments and some of the song titles. I would be grateful for your help in illuminating in any way you can!
Golden State Country Bluegrass Festival
Marin County Veterans' Auditorium Building and Grounds
San Rafael, CA

After the sequence of three sets covered in posts 4, 5 and 6, we have a dinner break on the program. I am assuming that things came back from dinner time on schedule. I know this sounds like an unreasonable assumption given festival-giving in general and this group of folks in particular (a later set will hint that there is generalized degeneracy present!), but the sets seem to conform to a pretty strict festival scheduling and things don't feel too terribly rushed to my ears. I could be 100% wrong, but anyway.

Anyway ... assuming things are on schedule, then I assume that the dinner break ended promptly at 7, or at least the emcee (Steve Martin, yes, that Steve Martin) came on then. What we have next is Steven Martin's emcee act taking musical form (we all know he plays banjo), duet-style with John McEuen of the Nitty Gritty Dirt Band (NGDB).
McEuen was a particularly big deal at this event and in this moment in time because, though I am no expert on all of this, I believe he was a key mover behind the late 1972 "Will the Circle Be Unbroken" (WTCBU for my short) project. This brought together a bunch of old-time country and bluegrass leading lights with some of the younger crowd, with the explicit aim of building bridges across generations and genres. Many of the summer 1973 bluegrass festivals were advertised as culminating in a WTCBU reunion, and the GSCBF followed suit. Jimmy Martin had mentioned in his set that he was on later with the Dirt Band, and he was one of the WTCBU old-timers. I'll try to make a post about the overall overlap of these two projects.

It's been linked around, but this interview is amazing, and the context that page gives about this particular moment in Garcia's life is precious. Anyway, go check it out.
Posted by Fate Music at 10/23/2010 01:12:00 AM No comments:

1977 The Jerry Garcia Band (JGB) was formed in 1975 to be a professional recording and touring band, and in productive years the Band would do a late-year East Coast tour. I'd guess the germ of this tradition formed in 1973, when Garcia and Saunders played the Hell's Angels Forever gig on the S.S. Bay Belle in NYC Harbor (September 5th) and then a billed gig at the Capitol Theatre in Passaic, NJ on September 6th. The next year (1974) they did a full two-week tour and then (1975), JGB proper (Garcia, Kahn, Tutt, Hopkins) did a slightly shorter one of ca. twelve days.

The 1977 East Coast JGB tour is interesting for a bunch of reasons which I won't get into here. Let me just point out that it has a few very-rarely-played things that are worth hearing.

On 11/26/77 at the Cap Theatre in Passaic, they did 7:30 PM early show and 11 PM late show. The second song of the early show is "They Love Each Other", which has a fascinating "Close Encounters" theme  tucked into it about four minutes in. Funny combination. Anyway, the JGB had seen the movie in New York City within a few days of this show, and out comes the famous five-note sequence in an unlikely place. It would show up again on 12/11/77 (Recreation Hall, Pennsyvlania State University, State College, PA) during the last number, "Lonesome and a Long Way From Home" (LAALWFH), and it was also hinted at during "Don't Let Go" on 12/3/77 [JB | JGMF]

There may be other things to uncover ... it wouldn't surprise me if there isn't another "Close Encounters" theme or two lurking around. Hell, maybe Corry already wrote this up in Golden Road! And, as I said above, there's much, much more to say about this whole tour, but I'll have to save that for another post.
Posted by Fate Music at 10/23/2010 12:56:00 AM 4 comments:

Bravo, Corry! The John Rich Question is indeed a great mystery.See Corry's post for the details of the question. I am sure I'll have to update this post several times, but I wanted to take the second I have available to get started with a reply.

I love this mystery. I agree with Corry that it stands alongside the Tim Hensley Question as one of the most interesting puzzles of JGB-era (post-1975) GOTS. Update: It is Tim Henson, Nicky just mis-slurred his name on 10/11/75.

I also love this music. The steel really gives great depth and color to these shows, which is great since I find 1976-1977 JGB for the most part to be a bit of a snore. The shows have a wintry feel to me -- not sure why I'd describe them that way (beyond know the date, of course), but there you go. They are well worth very close listening.

I believe the source of the name is an Oakland Trib piece by Larry Kelp from 12/23/76 (1), which gives a loose, analytical review of the Wednesday, 12/22/76 show. Kelp lauds the JGB's "lower key music" (which he later artfully labels "sway music") and identifies John Rich as the "newest member" of the JGB, filling "in the sound with tasty rhythm and pedal steel guitars". It sounds like the atmosphere was joyful and intense. I haven't scrutinized this, but I assume a midweek, three-night run was quite unique and only feasible because it was right before Christmas.

There is a second guitarist on January 29, January 30, and April 9, 1977. I believe that he/she is sometimes playing rhythm and sometimes a steel guitar. Given what Kelp says, I'd bet it's "John Rich." He plays those two instruments and he seems to have been around for at least a few months, which in that world qualified for membership, I'd guess. Membership is a big deal to me, as an institutionalist. (Long back story to that ... there's an original thought there that I think is important, but it's years away from fruition.) As Corry notes, we have discussed JGB becoming a going concern around this time. I have other, really nice evidence about that that I haven't processed yet, but anyway the fact that this guy was around and characterized to the local music reporter as a "member" of the band is noteworthy.

Yet I have been able to find absolutely zilch about this guy. No-one I have spoken to (Donna, Linda Kahn, numerous others) seems to remember him. There are a few album credits that look likely, but they strike me as really obscure. (Sorry, don't have them noted yet.) He's tough to Google because of another country music-playing John Rich, of the group "Big & Rich".This can all be better researched, I know, and if no-else does it I'll get to it eventually and post an update.

Corry's guess that there's a Tutt connection seems plausible to me. Between Nashville and LA Tutt must have known an awful lot of steel players. I don't know how many would have come in and out of Elvis's orbit (I have never really listened to The King), but I assume it's a lot. If we can ever encourage Tutt to talk about this stuff, we might get to know for sure!

A few more scattershot thoughts.
Anyway, I am grateful to LLD for prompting this! Thanks, Corry!