Continuing this little Santa Cruz series, I thought I'd use the next gig to lay out some nomenclature. A little taxonomy to tempt your tastebuds.

The current title only came to me after I had just posted this more generically. It currently reads "Documenting the JGB" to complement the Billing and Accounting posts from the 10/8/75 shows (linked below).  Maybe the better term is Publicizing, because the documents I look at below are all publicly available, highly regularized, capable of setting peoples' expectations at the time and into the future. These are, in short, highly institutionalized practices. Maybe that's the biggest point about Accounting, Billing, Publicizing, and now Documenting. We know an awful lot about where and how to look for evidence. We have "well-formed priors", as my Bayesian sisters and brothers might say.

Nomenclature and Examples from JGB 2/26/76

The shows provide a nice set of public paper documentation that I'd like to lay out. Here are the key pieces, in my nomenclature, that I can illustrate: 1) preview; 2) listing; 3) ad; 4) review. There are a few other things that I code as mentions, some other things I just tag expost (which are really ex post mentions), and now a category called an item. These are all key categories in my research, spanning the time frame from before the show (e.g., #s 1-3) to after it (e.g., #4).

The 2/26/76 shows at the Del Mar do not feature a paragraph- or article-length sneak peek (à la "Garcia Headlines Friday Concert" from OAITW 10/5/73). But they do provide, on p.1 of that day's Good Times, an attractive picture of a trim, smiling Jerry playing the white Travis Bean - this has all the markings of a snap from the 10/8/75 show. The caption essentializes, "Jerry Garcia and his band will play two shows at the Del Mar Theatre, etc. etc." A canonical preview would be longer, but I'll call it a preview anyway. 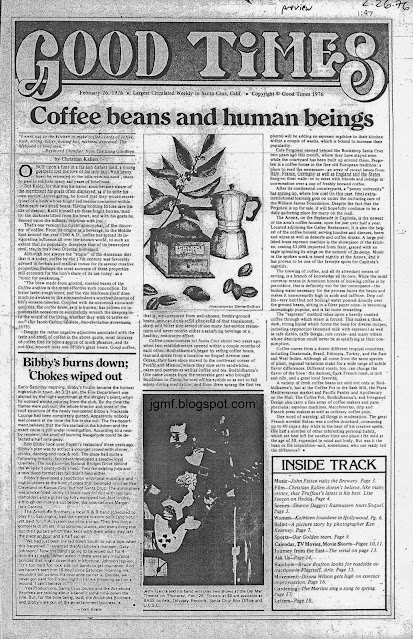 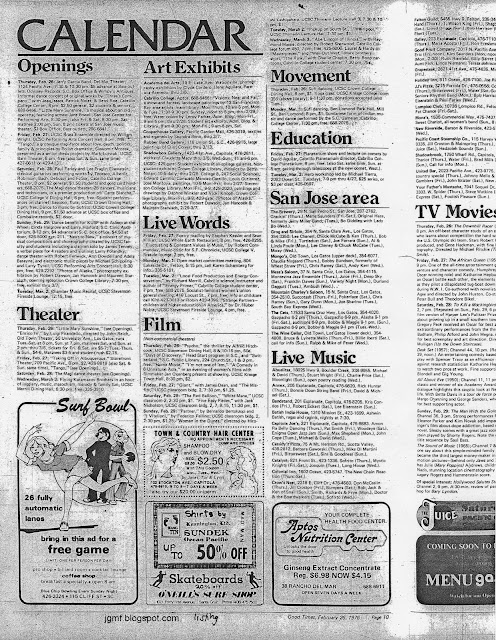 a) Same publication, next page, an ad: 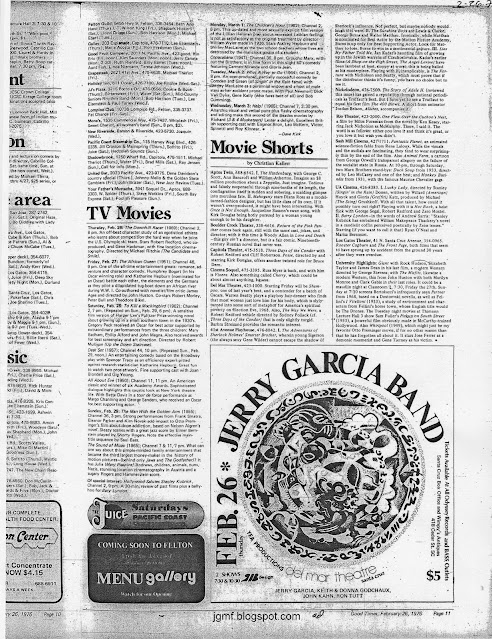 I'd like to see this mandala design in color, but alas there is none. I can't quite make out the artistic attribution: would that be RIB design?

b) Basically the same ad in the campus newspaper, the City On A Hill Press, from the prior week, with some vintage 1976 Dennis Banks/AIM/Pine Ridge reportage. A little dissonance with your morning brew: 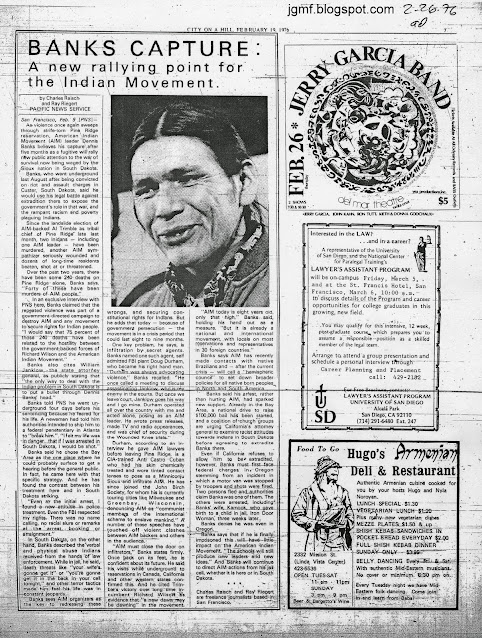 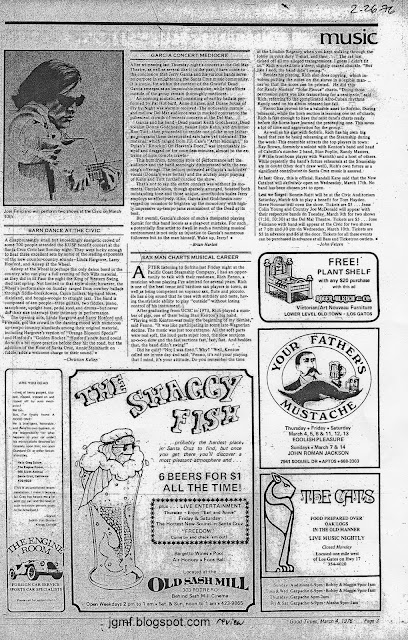 One of the more lethargic programs these deteriorated ears have yet tolerated. The material … was inexcusably insipid and dragged on for countless minutes, almost to the extreme of note-to-note crawls.  ... humdrum, tiresome style of performing ... The tedium increased as Garcia's lackluster vocals ... and the acutely inept playing of [band members] curdled the show. ... numbing musical environment ... Wake up, Jerry!

So, to beat the methodological point to death: When looking for evidence to confirm or disconfirm a given event, the most systematic research method involves seeking out any or all of the above: 1) preview (ex ante), 2) (calendar) listing (ex ante), 3) ad (ex ante), 4) review (ex post). I also use a category called mention, which can be either ex ante or ex post (e.g., in the Chronicle's "Something Else" feature, or in the Staska-Mangrum column from the Hayward Daily Review). We could also think about announcement of the show (e.g., "tickets on sale tomorrow for Garcia concert"), but I don't tend to see too many of those. update 20140922: I have added a category called an item, which I found a bunch of in my recent SF Chronicle research. For example, the JGMS show on September 9, 1971 gets a little 2-3 line blurb (item: "Garcia, Fogerty at Harding," SFC, September 9, 1971, p. 44). This shades into announcement territory, but some of them feel conceptually distinct. For example, sometimes they'll say the show has been sold it, a show that had been formally "announced" weeks or even months before. I found a bunch that remind people that the Jackson Five are at the Cow Palace, or whatever. Not quite announcements, not a mention in a column, not a listing, but an item.

There are other possible categories, but this covers most of them. Each can impart important information. When many are unearthed we of course gain more-than-additive confidence, through the mechanism of convergent validation.