It seems that these shows have been shrouded in mystery and legend for a very long time. Maybe it's because April 1970 was such a hot month, because the tape circulating from this weekend reveals a characteristically hot show, because the next gig (4/26/70 at Poynette Wisconsin) is similarly enshrouded, because "Mammoth Gardens" just sounds so damn primal, and/or because Colorado is a special place. Maybe all of the above. At first there seemed to be some question as to whether two shows took place at all, or only one on Friday, April 24th. This has been pretty well resolved (there was a show on Saturday 25th), and I will bring additional evidence to bear on this question. Next, there has apparently been lots of confusion over the correct date of the circulating material. I believe I can resolve this question, as well. My primary aim in this post is to argue that the circulating tape belongs to Saturday, April 25th. I have a few other points to make as well, but that's the main one.

The value-added here is based on a second show review that I unearthed in the Chinook (1), which appears to have been a Denver/Boulder "underground" newspaper. A previously-known review from the Colorado Springs Sun (2) (supplied by Uli Teute and Hanno Bunjes and reproduced in the Deadlists forum), plus all of the other information wonderfully compiled at Deadlists, plus eyewitness information from Ken Condon, plus this new review can all be combined to generate a fuller picture than has heretofore been available of what seems to have been a pretty freaking remarkable pair of shows.

Let me preface this with a word on methodology. Ross Hannan sent me something to this effect, so I should tip my hat to him and apologize if I haven't rendered this accurately or as he would. But, in short, contemporary accounts (I would give special priority to published, ex post reviews) are the evidentiary gold standard when it comes to documenting events such as rock concerts. After this come other presumably "vetted" contemporary information by those with a business stake in the issue, such as posters, tickets and other ephemera, contracts, etc. I'd put ex ante calendar listings next. The informational quality of things such as tape labels and long-distant memories shows tremendous variance, in my experience. Some sources are good as gold, others ... not so much. Anyway, contemporary show reviews are my favorite sources, the ones in which I have greatest confidence. That's why I was so happy to find a second one for the GD at Mammoth Gardens.

The State of Our Knowledge:

Here is what Deadlists currently shows for 4/24/70. It mentions some confusion over the dating, but says that eyewitnesses place this set on the 24th and not the 25th.


All we know about 4/25 is that the show happened. This is based on the scans below and on eyewitness accounts. 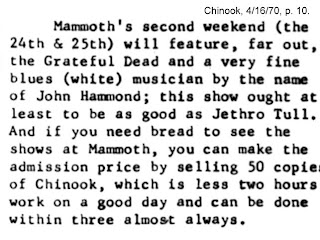 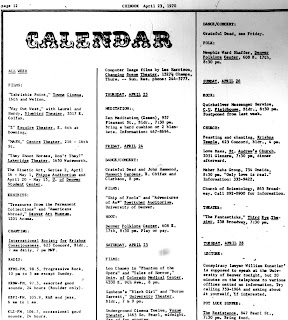