I am going to argue that the Quick and the Dead played Eagles Auditorium in Seattle, WA on Friday, January 26 and Saturday, January 27, 1968, and *not* on Monday 1/22 and Tuesday 1/23. This may well be widely accepted, but since the tapes still circulate with the latter dates, and Deadlists remains a bit noncommittal, I thought I'd lay it out.

There is both ex ante and ex post evidence for this. 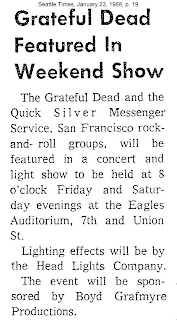 For ex ante evidence, to the left is an item in the Seattle Times dated 1/23/68.

Here is a calendar listing for 1/27/68, published on the day of the second (Saturday) show:
There were also articles written ex post in the Helix, as the following two. Note that I am not entirely sure about the volume/issue/date. I noted these as v2 n 13 (2/1/68), but according to the University of Washington's Special Collections Helix scans, this is v2 n10. The microfilm from which I was working made it exceptionally difficult to figure out this sort of thing, insofar as it was legibly identified at all. 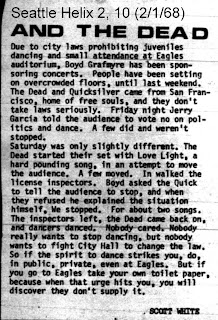 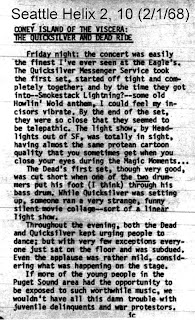 What do we learn from this? The Quick and the Dead played late January 1968 Friday-Saturday shows at Eagles Auditorium. The GD, on 'jc''s account, opened the second show with Lovelight.
There is a poster in Art of Rock, plate 3.104, p. 287; see also p. 249.
By the way, the liner notes from the Golden Road boxset give the Seattle Eagles Auditorium dates as 1/26-27/68.
In sum: I believe the evidence establishes that the GD played Eagles Auditorium on January 26-27, 1968.

Argument 2: The Quick and the Dead did not play Eagles Auditorium in Seattle on January 22-23, 1968 (Monday-Tuesday).
As far as I can tell, the only evidence in support of this dating is the labeling of GD vault tapes. Now, I am aware that notwithstanding the chemicals that could have been involved, GD vault tape labels are incredibly reliable. So when I say "only" I don't mean to deprecate this empirical source; I merely mean to say that this is the unique evidence that is known to me. Material from "1/23/68 Seattle" has been issued on the official release Road Trips v2 n2, and of course material with both dates has circulated for some time in collecting circles.
Evidence against the 1/22 and 1/23/68 dating is entirely mostly of the "dog that didn't bark" sort. There are no known posters. There were no show announcements in the Seattle Times, the Seattle Post-Intelligencer, the University of Washington Daily, nor, most importantly, in that masterpiece of Seattle psychedelic underground journalism, the Helix.
Update: I have found a dog barking, albeit quietly, about 1/23/68. The Seattle Times, January 14, 1968, p. 85 (or is it B5?), has a little item entitled "Hanauer, David in 10-Rounder Here" about a World Wide Boxing Club event. Seems Jack Hanauer, a middleweight from Pasco, was going to meet Indian Joe David of Oakland. There were a few other fights on the card. Most importantly, the fight was scheduled for January 23rd in Eagles Auditorium. Indeed, the January 23rd opening date for the fight club was announced as early as 12/31/67 in the same paper.
Based on spending a little bit of time with these sources, I am 100% persuaded that any GD show at Eagles and/or otherwise in Seattle would have been advertised and/or otherwise covered in some of these sources, ex ante and/or ex post. The GD's first visit to Seattle, AFAIK, was in July 1967. That show was extensively advertised, including with a poster. The "Be-In" that afternoon at Golden Gardens Park, before the Eagles' show, was reported in the P-I. Similarly, the Eagles Shows on September 8-9, 1967, featured a nice ad in the Helix. The January 26-27 shows were advertised widely and much-discussed.
Finally, reading the above in particular, there is just zero intimation that the GD shows on Friday-Saturday are taking place after a set of Monday-Tuesday shows that same week. Does this make sense? There's no mention anywhere that they had just played the same venue a few days before. By contrast, there's lots of "sense" in the coverage that the Quick and the Dead came upon a Seattle that was barely ready for them. The rube Seattlites are made to seem like they have a lot to learn. Hard to imagine that'd be necessary if the GD had warmed them up just a few days before.

In sum, notwithstanding the apparent existence of taped in the GD vaults labeled with these dates, I argue that no GD shows took place at Eagles Auditorium in Seattle on January 22-23, 1968.

I have no idea what would explain the mislabeling of the tapes. Maybe 1/22-23 were originally scheduled, and maybe since the GD were recording for the album tapes were pre-labeled before they were rescheduled. Just one less thing to do on tour, and all that. I have no idea. But unless some other evidence turns up, I am compelled to conclude that 1/22-23/68 Quick and Dead shows are phantoms.
Posted by Fate Music at 5/28/2010 08:38:00 PM