Sometime in the afternoon or thereabouts of Friday, November 12, 1976, Garcia, John Kahn, Keith and Donna Jean Godchaux, probably Richard Loren hopped into sedans being driven by monitor mixer Harry Popick and roadie Bill 'Kid' Candelario to Davis, California, about a hundred miles east of San Francisco on I-80. Thus began a little weekend jaunt that strikes me as more pleasant than one they'd do in August '81 (billed as the "1st Northern California Tour"), if only because the latter passed through Stockton in August, while this one offers foggier temperatures and a cooler implicit psychology.

It had already been a busy week, Sunday-Monday for Freddie Herrera in Berkeley and Palo Alto (I don't think a note of these shows circulates among collectors), then Tuesday through Thursday at Elliot Mazer's His Master's Wheels studio, in the space formerly operated by, variously, Pacific High Recorders and Alembic. The band gives every appearance of trying to use these sessions to work up some old favorites, sort of like a second version of Compliments, a few more fonky gospel numbers, maybe a few not so fonky, but a nice eclectic mix, for some ready-to-sell vinyl. This is the...

At His Master's Wheels (HMW) Elliot Mazer had put together a space that Garcia really liked, singling it out when asked about the tastiest rooms in the Bay Area in June of 1974, right after recording Compliments (mostly at Columbia) and using it for Reflections, recorded second half 1975 and released early 1976, itself involving some abortive components (see Corry). That involved the payoff of the summer 1975 United Artists bailout. In late 76, Jerry played for Clive, and Arista paid the HMW studio time, as Davis, Garcia, Weir and the Grateful Dead (the latter three not at all the same thing as these men make their respective journeys) enter into a deal to further find fates. It’s impossible to say whether Davis fronted the studio time as an act of good faith, or whether, more likely, the time would eventually come out of Garcia’s advance. Despite its aesthetic promise, I can't say why this project gwas shelved. Eventually, after long battles with demons in the studio --recorded in earnest August-November 1977 and released around April 1, 1978-- Cats Under The Stars replaced it as the first, and in many ways the only, Jerry Garcia Band studio album.

The Abortive 1976 Jerry Garcia Band Album would differ from its predecessors, not a Jerry Garcia record, but a Jerry Garcia Band one, a false step in the institutionalization of Jerry Garcia. Bringing Nicky on board in summer 1975 was certainly a touring proposition - Nicky is contractually obligated to mention his 1975 Mercury record No More Changes (see my WIP "Hiatus Garcianomics"), and the band took xx tours (involving out of town flights) in its three-and-a-half months together. But having the Session Man in the house was almost certainly also a recording proposition: the timing with the recording Compliments is too strong suggestive. But it fell apart, for reasons unknown, and became a little bit of a Garcia-GD Frankenstein, incoherent even if it has its moments.

After August 1976 sessions paid by Round Records - perhaps the last good checks that outfit ever wrote, if they didn't bounce, October and November found Arista paying the bills, leaked to the cognoscenti no later than November 20th.[i] Conceptually, take 2 of the first JGB album resonated with the "Americana Jerry likes" feel of Compliments, but with the band of Garcia-Kahn-Tutt-Godchaux (Keith) and at least some of the material drawing from cooler, stiller depths. Garcia tried Elizabeth Cotten's "Freight Train" and "Oh Babe It Ain't No Lie" on for size for the project, about which I wrote at some length, noting that the ancient songstress found pulp-and-glue permanence in the New Lost City Ramblers Songbook (1964), through which, I surmise, Garcia might have learned the tunes. An undated OBIANL features on All Good Things, disc 3, track 11.

The Band also drew heavily from the gospel well with which Jerry, Keith, Donna and the rest had spent so much time in the Godchaux's living room in 1975 (for Keith and Donna), sometimes quite literally accompanied by a Samarian woman and a "Strange Man".  telling her every sinful thing she'd done, and setting her free. After a shambolic January, the bicentennial live act came to feature more upbeat gospel, as well, from the celestial choir of  “My Sisters And Brothers” to the hot-to-trot show closer “Ride Mighty High”. (Another angelic boogie, “Magnificent Sanctuary Band” [released on the 2004 box set All Good Things] never made it out of Stinson.)

Beyond gospel we find a Dylan (“Visions Of Johanna”, on the bonus disc All Good Things Redux), some black--and-white rockers “Bo Diddley” and “Not Fade Away” (11/9/76), a little R&B on November 10th (“Don’t Let Go”, “The Way You Do The Things You Do”), "The World Is Waiting For The Sunrise" (11/10/76), “Matilda” (calypso on both 11/10/76 and 11/11/76!) and the pure train “Streamlined Cannonball” (11/11/76). To travel to the places to which these various tunes were established, among the people who established them, would drive across every route and byway east of the Mississippi, lots of cities and hollers and plains, and a few on the other side; to do so by the means that conveyed them would bring you to ambient voice, boat, ship, raft, rail and automobile. Aesthetically, the collection would make a fine record.

After laying down some tracks, the tour looks take draw a long, deep, weekend breath through some gigging and green spaces, the late Friday night show in Davis, it culminated in a pair of Saturday night shows at verdant Humboldt State.


I have notes from the front end below. In terms of the back end of the "tour", Jerry has some land up in Mendocino, that Laird Grant lives on - maybe Garcia checked in, said hello and stocked up on the local fare --still autumn, harvest season-- for the rides back home. 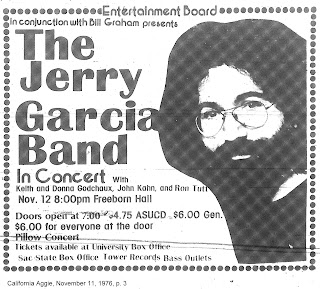 Depending on where they were coming from, this crew crossed a bridge (Richmond-San Rafael from Marin, or the Bay Bridge from the City), hooked up with I-80 east bound, crossed another bridge (over the Carquinez Strait), went up over the coastal ridge and dropped into the Great Central Valley. "Jerry Garcia has always liked this town," wrote the California Aggie reviewer about Davis. Campus gym Freeborn Hall would have been a drafty, smelly basketball arena at this time, all echo, but the college kids, many of them from the Bay Area, were enthusiastic, and the show shimmered. "Never before," wrote his seasoned reviewer, "have I seen Garcia dance, nor have I ever seen him smile so much".


So nice to hear. In terms not of the visuals of Jerry (and Donna) swaying in a sweet groove, but of the audio, we are blessed to have Betty Cantor Jackson's 4th reel of the night (reels 1-3 are AWOL, and may have returned do dust), and it holds just a 30 minute "Don't Let Go" and a show-closing "Might High", the crème de la crème of 1976 JGB repertoire, just about (LAALWFH wants a word with me).

A few highlights of the Davis show, based on the tape evidence.

John Kahn does a bass feature in DLG, which is actually interesting, not his usual feathery fluttery tickling thing – actual bass playing. He could do this in earlier years, and occasionally later on, but to hear John Kahn play with some power in November 1976 is a revelation.

Keith is noodling around some classical tunes after DLG.

"Mighty High" is nothing short of amazing. I love Donna Jean Godchaux.

! review: Krane, Matt. 1976. Garcia & Company: Phenomenal Crowd Pleasers. California Aggie, November 15, 1976, p. 3. positive review of 11/12/76. Under subtitle "Fabulous Crowd Pleasers" starts by getting out his Webster's: "mellifluous (me-lif-loo-es, adj. (L. /mellifluus: mel, mellis-honey, fluete-to flow), flowing sweetly and smoothly; honeyed; said of words, sounds, etc. … Jerry Garcia has always liked this town, Davis", gave a memorable performance. Not's the JGB has played Crabshaw Corner in Sacto. Freeborn  Freeborn usually sounds like ass, but the reviewer says the band's gear sounded great." Kane praises "Garcia's magnificently mellow, fluid blues progressions". "Never before have I seen Garcia dance, nor have I ever seen him smile so much. But he had a lot to smile about, and so did a crowded Freeborn." "He appeared very warm and comfortable. His music was doubly so."

! R: media: 7" reel master @ 7.5ips 1/2 track (reel #4 only). As far as I know, reels 1-3 are not in the Garcia Vault, which might mean they are still out in the world somewhere. They are known not to be among the Betty Boards (TM). Given the water damage to this reel, though, it's strongly possible that the first three reels were among the miles of rotted spaghetti and distingrated vinyl and oxide, silt and pulp and goat piss. As of this writing (3/24/2016), my best sense is that they are gone forever, but that could be wrong.

! R: note: "This reel was old & brittle and there is some tape squeal present."

! P: reel-04-t02 DLG 12ff John Kahn is taking a bass solo, and for 20 seconds he's on it, a little too fluttery at 12:20, some great bass soloing by John Kahn -- yeah, I said it. @ 14:43 the band comes back, John gets a nice round of applause from the crowd. This is building to a very nice crescendo, all involved, Garcia high up 15:18, all the rest is percussion, now he puts some blue on it 15:39. Garcia in a very interesting space 16:13, a little more speed. 25ff is Garcia's vocale-guitar duetting, some good moaning and scowling. Jerry gets real strong wid it to come to an end, everyone lands right.

! P: reel04-t03 Mighty High is incredible. Donna is bringing it early 5ff, everyone singing hard, she is belting! You guy, girl! Even Keith is yelling, in his nasally way, making the tape squeal. Man, that is some good time music for the Aggies!