Elizabeth "Libba" Cotten (née Nevill) (January 5, 1893 – June 29, 1987) was a profoundly original American folk musician, vectoring between the music of isolated early 20th century North Carolina and the multimodal hypersounds of the present – check her out playing in crystal clear black and white on your youtube. A southpaw church and porch picker, Ms. Cotten played a righty-tuned guitar upside down and sang the folk and blues of a self-possessed and sassy little girl, who are known to come in all genders, ages, and sizes, Scout Finch a few decades earlier and from the unscripted side of town.

Ms. Cotten's musical family and environs might have foreordained her, but that destiny nearly passed her by. She mostly stopped playing around 1910, when she became a single teenaged mother in Chapel Hill. Then, "In the mid-1940s, [she] chanced to meet composer Ruth Crawford Seeger at a department store. They began to talk, and Seeger soon hired Cotten to work in the Seeger household. It was here that Cotten became motivated to pick up the guitar again" (cite). Pete Seeger recorded her on reel-to-reel tape and projected her through barriers of race, class, gender through the folk revival and into national memory.

Her first record, Folksongs And Instrumentals With Guitar, appeared on Folkways (FG 3526) in 1958 (youtube), and it introduced the world, including eager young white (wannabe or legit) folkies with turntables and a bit of disposable income, to a totally localized and yet probably universally appealing "country ragtime" style and a set of songs like a bracing draw from a cold spring. Cotten's repertoire tapped timeless British Isles-meet-Africana –i.e., American—stock such as "Going Down The Road Feeling Bad", a bunch of honeybabe songs and, of course, "What A Friend We Have In Jesus" (discogs), but her biographic originals are what will slay you.

She was on in years by the time she was "discovered", but this suited her frailing country voice just fine, a spirited gem coming through loud and clear on Folkways vinyl, which rescued many a prospective legend from the obscurity that befell those who never got wire-recorded and waxed in. But it's not just that, it's also the great store of the written word, promising extended-if-not-eternal life for those it picked up and, in the absence of vinyl, utter obscurity for those it missed. "Cut off by the cataclysms of the Great Depression and the Second World War and by a national narrative that had never included their kind," Greil Marcus wrote of many of the musicians appearing on the Harry Smith's Folkways Anthology of American Folk Music (1952), "they appeared now like visitors from another world, like passengers on a ship that had drifted into the sea of the unwritten" (Marcus 1997).

Cotten was double-lucky, because not only was she recorded, but she also found pulp-and-glue permanence when Pete Seeger and John Cohen included two of her originals in their New Lost City Ramblers Songbook (1964). 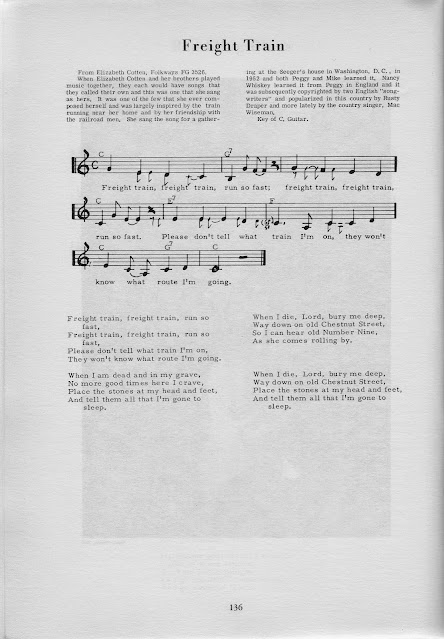 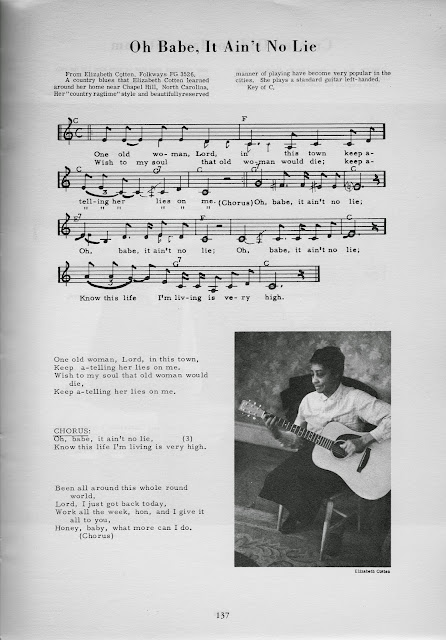 Garcia fell in love with both "Freight Train" and "Oh Babe, It Ain't No Lie". Both are utterly haunting, based in Ms. Cotton's childhood and expressing a yearning place-boundedness that has been the fate of most everyone who has ever lived, statistically speaking, yet a world that nevertheless can remain alien and estranged. Ms. Cotten explained OBIANL:

That's the song I wrote about a lady who lived next door to us. My mother had to go to work and this lady would teach children. She told my mother something: made my mother punish me. They hurt me all the day. 'Cause I know what she told my mum was not true. That song's 'bout me getting punished. My feelings got hurt, 'cause I did not do what Miss Mary said I did. And I used cry in a bed, and a little verse came to me, a pretty tune came to me, and I made a little song, a little tune I love.

If OBIANL is a wise child's lament at a world dark with injustice, "Freight Train" provides the dream of escape. Ms. Cotten:

We used to watch the freight train. We knew the fireman and the brakeman, and the conductor, my mother used to launder for him. They'd let us ride in the engine, put us in one of the coaches while they were backing up and changing ... That was how I got my first train ride. We used to walk the trestle and put our ear to the track and listen for the train to come. My brother, he'd wait for this train to get real close and then he'd hang down from one of the ties and swing back up after the train had passed over him.

No wonder this one, too, brings ample morbidity – that kind of shit can go really wrong in a hurry.

When I die, oh bury me deep
Down at the end of old Chestnut Street
So I can hear old Number Nine
As she comes rolling by

Garcia tried on both tunes for an abortive Arista album project during November 1976 sessions at Elliot Mazer's His Master's Wheels (HMW) Studios (OBIANL features on All Good Things, disc 3, track 11). (For more on the '76 studio work, see.) They would have fit perfectly. OBIANL found the more fulsome later live expression, appearing in every Garcia acoustic configuration of the 1980s, from the Dead's September-October 1980 treatment (immortalized on Reckoning, Arista A2L-8604, April 1981), to Amsterdam with Bobby Weir (10/11/81), Garcia's only solo engagement after 1965 (4/10/82), to the many Garcia-Kahn and Jerry Garcia Acoustic Band (JGAB) gigs later in the decade. "Freight Train" had preceded OBIANL at the solo acoustic show, but Garcia couldn't remember the words and shelved it, as a known and public proposition, for over a decade. He took it back up with Grisman, and it appeared on their Not For Kids Only (Acoustic Disc ACD 9, 1993) chock full of New Lost City Ramblers Song Book chestnuts. By that time, and when it appeared as an acoustic one-off during an electric JGB equipment failure at the Knickberbocker Arena in Albany (11/3/93), but especially on its two 1994 public voyages, the song's lullaby came across a sad Siren's song, a stone being laid at Garcia's own pleading head and feet, buried deep under ol' Chestnut Street.

In response to a fan's concern that the Dead had ripped Elizabeth Cotten off with its "Sugaree" (evoking, as it did, her "Shake Sugaree"), manager Richard Loren said in May 1981 that she was a "great hero" to Garcia (1). When she died, Garcia took to dedicating OBIANL to her memory, the only artist he ever consistently recognized in this way, as far as I know. At many of these shows, these were the only words he spoke to the audience, a testament to the high esteem in which he held her.