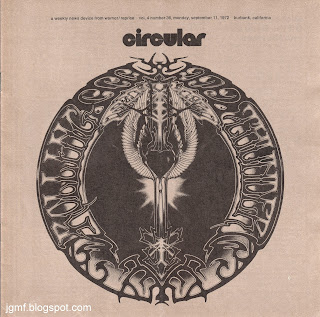 Warner Brothers pimped Mickey Hart's Rolling Thunder (BS 2635) in its "weekly news device" Circular for its September 1972 release. As I found with an earlier edition of Circular ("Keith. And, Modernity"), this one holds various pieces of interest to me. 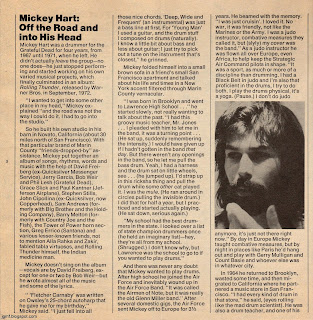 I was born in Brooklyn and went to Lawrence High School ... I had this groovy music teacher, Mr. Jones ... I pleaded with him to let me in the band, it was a turning point ... (He sat up, suddenly remembering the intensity.) I would have given up if I hadn't gotten in the band that day. But there weren't any openings in the band, so he let me pull the bass drum. Yeah, I had a harness and the drum sat on little wheels, see ... (he jumped up). I'd strap up in this ricksha thing and pull the drum while some other cat played it. I was the mule. (He ran around in circles pulling the invisible drum.) I did that for half a year, but I practiced and started actually playing. (He sat down, serious again.) My school had the best drummers in the state. I looked over a list of state champion drummers once (he held an imaginary list)-hey, they're all from my school. (Shrugged.) I don't know why, but Lawrence was the school to go to if you wanted to play drums.

Not sure I knew that story, but I don't really pay much attention to Mickey. 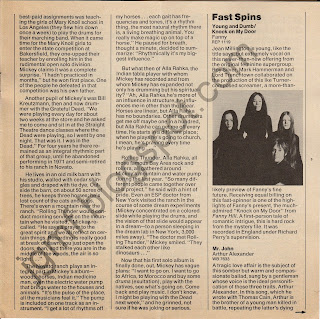 Third, more bio, especially interesting in view of the recent discovery of some Spanish Joe and the Jaguars records, featuring a sharp-looking Mickey Hart on drums, we find discussion of his time "in the Air Force Band" (see Corry's "Pre August 1967 Mickey Hart"). "It was called the Airmen of Note," Hart said, "but it was really the old Glenn Miller band." Mickey spent 3 1/2 years in Europe, also traveling to Africa: "I was just cruisin'. I loved it. No war, it was friendly, not like the Marines or the Army. I was a judo instructor, combative measures they called it, but (slyly) my cover was the band". So, "by day in Europe Mickey taught combative measures, but by night in places like Paris he'd hang out and play with Gerry Mulligan and Count Basie and whoever else was in whatever city."

I don't claim to know Hart's bio, so I am mostly just putting this out there. Did he really play in the Air Force Band, was that really basically the Glenn Miller Orchestra, and did he really play with Count Basie? I fear this latter might be a garbling of the Count Basie connection in the "when-Mickey-joined-the-Dead" story.

Anyway, Circular is fun. I think I have another Dead-related one around here somewhere, I'll try to check it out.