The Grateful Dead: Top-Grossing Act of 1991

I just picked up a copy of Pollstar's 1991 Year-End Special Edition, entitled Year of the Dead, dated December 31, 1991. 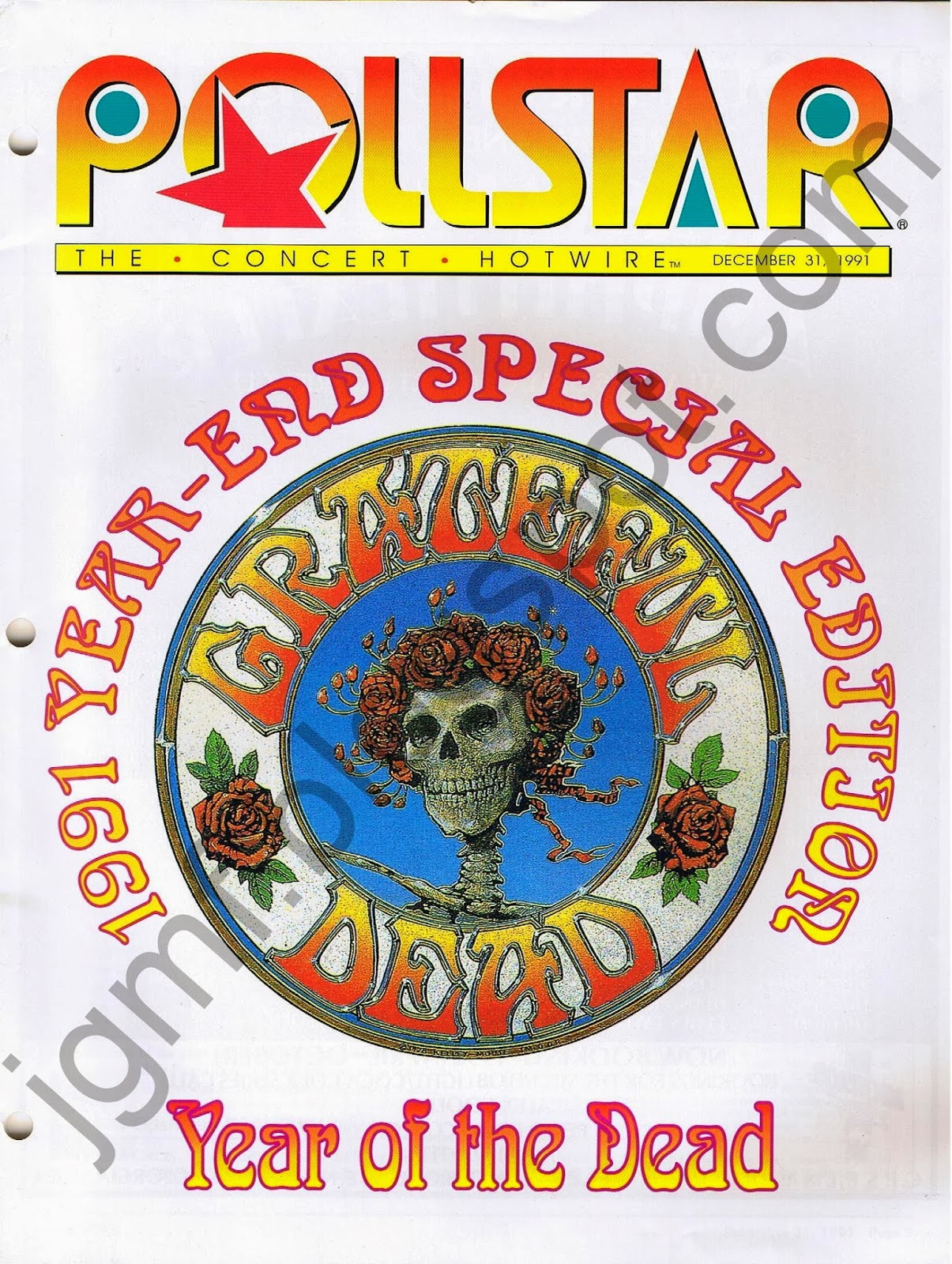 Though I don't do much GD stuff, blogger's stats tell me that GD posts are the most popular. People are funny. But I digress. One of the reasons I don't do it is that others are just so much better at it, and there's so much to do. I like my quieter, Garcia-on-the-side view of things.

But I couldn't pass this up. I just loved some of the data that I found in this magazine, and so want to present a few pictures, each with a few associated thoughts (though, thankfully, not a thousand words).

The GD was the top-grossing American live music act in 1991, bringing in almost $35 million for the year. At this point, Garcia is founder and de facto leader of a company grossing well over this amount, once we factor in GD merchandising, record sales, licensing, royalties (I'd love to know the details), in addition to all of that stuff from his "other" bands. He was an entrepreneur (I need to read Barry Barnes's book, I know). A lot of the messed up shit (such as the 1978 tax liens) that I report on needs to be put into this context. The Dirty Fucking Hippie was a massively successful businessman. He wasn't just some junkie rock star. He was an American success story: Jerry Garcia, Inc.

Here's the key table, with data from Pollstar. I have independently calculated the gross per ticket stuff and the column totals. Pollstar's narrative has some weird numbers, for example "76 shows in 27 cities", while I count 58 paid shows (plus free Bill Graham Memorial show on 11/3/91, no tickets of revenue, of course) across 23 cities.

I'll leave it to GD people to comment and parse as they might like. Let me just elaborate with one more picture from these data, focusing on promoters.

Grateful Dead Productions had the band's yearly excursions down to a science in '91 with Bill Graham Presents and Metropolitan Entertainment splitting the country in their roles as tour producers. All the Dead dates were co-promoted by one or the other except for a stop in Denver, where the two companies couldn't agree on who had the territory. It's safe to say the plan won't change much in the future. If there's one thing to learn from this success story in a year that had so few, it's 'If it ain't broke, don't fix it.'


One last point, on data and methodology: the entertainment industry has always documented itself very thoroughly, and especially in quantitative (and, specifically, monetary) terms. I guess that's true of all industries, but, like any ad-based industry, music, television, film, and the rest of the entertainment-industrial complex had a great incentive to make at least some data public. From very early on there are charts and lots of information about grosses and such.

So how is it possible that we don't have better quantitative data in the field of Grateful Dead Studies? We need  more graduate students writing more dissertations to start compiling more data; we oldsters can't handle the strain. Billboard, Pollstar ... etc. etc. I want graphs of the chart position of every Dead/Garcia record ever ... stat! (so to speak)
Posted by Fate Music at 2/23/2014 02:38:00 PM