In connection with another post that is taking me a long time to finalize, I have been looking at the various crossings of Garcia and the Jefferson Airplane. Among the many sources I have been using is Scott Abbot's JABase volume 3, available online at http://home.myfairpoint.net/srabbot/airplane/jabase.htm.

There, I find a listing for the Airplane doing two shows at the Grande Ballroom in Detroit, MI on Thursday, November 24, 1968. Abbot notes a "jam with the Grateful Dead after the second show".

Deadlists shows a GD show on this date at the Hyde Park Teen Center in Cincinnati, OH. However,  Deadlists's own notes point to a flyer at http://cincinnati.com/blogs/eyeontheeastside/files/2011/05/thedead.jpg, which, if legitimate, indicates the Hyde Park Teen Center show was on 11/30. Both dates can be made sense of in terms of the GD itinerary, which has them at the Kinetic Playground in Chicago on Wednesday-Thursday 11/27-28/68 (where were they on Friday, 11/29/68?). The 11/24 Cinci gig would presumably have had to be in the afternoon, if it's accurate, and if the location of the GD in Detroit that night is to be believed. More likely, I think, is that the Cinci thing was on 11/30. This leaves the GD free between 11/23/68 in Athens, Ohio and 11/27/68 in Chicago. 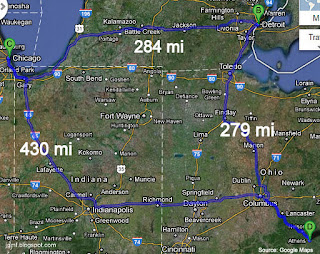 So, they had a super-long drive from Athens to Chicago between 11/23/68 and 11/27/68, as well as the implied several free nights. Why the hell not pass through Detroit and jam with the Airplane? Check out the room in advance of their own billing the next week. Now, I note that this makes the 11/30/68 Teen Center thing seem less plausible -- why drive 430 miles for such a gig? I am not sure how all of this fits together.

I am really inclined to believe that members of the GD were at Grande Ballroom on 11/24/68 with the Airplane.

Oh yeah, one other thing (which would also cause problems for the 11/30/68 Teen Center thing), based on looking at the posters for the 12/1/68 GD date at Grande Ballroom linked from Deadlists. Can the posters be read to say the GD are playing 11/29, 11/30 and 12/1/68 at the Grande, with opening acts on Friday night (BS & T) and on Saturday (The Rationals), playing without an opener on 12/1? This would account for the open Friday night, which the late 1968 GD would absolutely abhor if it could be avoided in favor of a payday.
Posted by JGMF at 18:31