The Birth of the Great American Music Band

Editor's Note: I should point out that the timing of this post was inspired by Corry, who has recently posted on the misty origins of OAITW and who earlier had posted on what might have been the "public debut of a very important band," the GAMB. While I think this post casts a different light on the "public debut" question, I am of course indebted to Lost Live Dead!

I am going to offer and try to defend the hypothesis, just articulated, that the Great American Fiddle / String / Music Band was "born", as recognized by David Grisman at least, on Saturday, March 9, 1974 at the Great American Music Hall in San Francisco, CA. I will try to post separately on the convoluted tale of the band's name.

Let me start by reproducing a calendar listing for the show from the Hayward Daily Review: 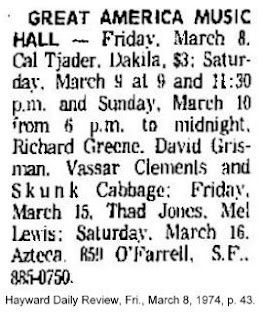 We see the following two listings:
I believe the first listing is effectively the first GAMB show, and the second is the first with Garcia. Let me lay it out for you.

A gig came up at the Great American Music Hall which was supposed to be Richard Greene and Vassar Clements, each with his own band. Richard asked me to play with him, so we got Eric Thompson on guitar, Sandy Rothman on banjo, and Bing Nathan on bass. Some promoter got a local group called Skunk Cabbage to back Vassar, and on the afternoon of the opening night both bands played a radio show. After Skunk Cabbage heard us play they said “We can’t play with Vassar; he belongs with you guys.” … So they opened the show for us, and we had Richard and Vassar and called it the Great American Fiddle Band. The second night Jerry Garcia played banjo, and Sandy Rothman switched to guitar. Bing Nathan couldn’t make the second night, so Taj Mahal played upright bass. Another musical friend of mine, David Nichtern … had been interested in my stuff … So he showed up the second night (ref 1, p. 34).

The first quote establishes that Greene, Vassar and Grisman were at the GAMH together for two nights, with Vassar slated to open for Skunk Cabbage. That looks an awful lot like the March 9-10 listings. He also says that Garcia didn't show up until the second night, which is consistent with Jerry and Merl being in Berkeley on the Saturday night (March 9th).

Second, note the 6 pm - midnight billing on Sunday night. This was clearly something special.

Third, I have independent evidence that Grisman and Vassar were interacting with Jerry at precisely this time. There was a Round Records recording session at Columbia Studios, San Francisco, on Friday, March 8, 1974, from 11:00 a.m. until 2:00 p.m. involving Vassar and Grisman working on "Lonesome Town", "Indiana," and "Russian Lullaby". The first and last of these appeared on Garcia's Compliments, while the middle one is probably "Back Home in Indiana," which appeared as a Compliments outtake on the incredible All Good Things boxset.

Fourth, there is the tantalizing little 7-minute snippet of Stinson Beach rehearsals featuring David Grisman, Richard Greene, Jerry Garcia, Eric Thompson, Bill Wolfe, and maybe others, that is dated March 8, 1974. They work through "Sweet Georgia Brown" and "Limehouse Blues," both of which were staples in the (too brief!) GAM/SB repertoire. Related, there is independent reason to believe that there are four reels' worth of materials labeled "Grisman's House", with this date, in the Garcia vault.

Fifth--and this to me is just the sweetest batch of evidence-- there is a fascinating set of fly on the wall recordings, a few hours' worth, labeled only "Bluegrass at Grisman's," that I think is relevant here. It's a mix of material, including some work-throughs of OAITW material (presumably from ca. early 1973) and some other stuff that sounds more like OAITW. But there's at least 20 minutes, and maybe more, of stuff that is clearly proto-GAM/SB, including very early run-throughs of Grisman's (eventually, but not yet!) amazing "Dawg's Rag." Sandy Rothman seems to be present for some of this, and Grisman, Greene and Garcia are omnipresent.

Now, here is the real kicker. At one point during this GAM/SB-ish material, we have the following exchange between what sounds like an older southerner and Garcia.

Ladies and gentlemen, I am prepared to call it QED on this basis. This material is from March 8, 1974. Grisman and Vassar do a morning studio session for Garcia for a little payday. Then everyone heads over to Grisman's in Stinson Beach. We already know, from point three above, that a bunch of guys are playing proto-GAMB in Stinson Beach, and uncirculated tapes suggest it's at Grisman's house. It sounds for all the world like someone's living room, including side conversations, phone calls, etc. The southerner gives us days of the week: "tomorrow", a Saturday, when Jerry cannot be there because he has a gig, and then a Sunday when he will be there. Those are clear references to March 9 and March 10. When we circle back to Grisman's account (first quote above), it all fits together perfectly. Note that he mentions both Sandy Rothman and Eric Thompson as being involved with the GAMH gigs. Well, here we have Sandy with these guys on the "Bluegrass at Grisman's" recording, and Thompson listed on the 7-minute snippet that David Gans shared with the world on the amazing (if perhaps presently a bit troubled) KPFA. Way too much coincidence not to be correct, IMO.

In conclusion, the evidence overwhelmingly points in favor of the proposition that GAMB was born on March 9, 1974, and Garcia first joined in on March 10th.

One last thing: it sounds like it was a helluva a great show. One account based on interviews with Grisman refers to the legendary 1974 GAMH gig with a "monumental jam" featuring Grisman, Greene, Vassar, Garcia, Fierro, Nichtern, and “from these jams, the Great American String Band was born" (ref 3). Having Fierro in with those guys would have been interesting, to say the least. I hope he just brought the flute and left the sax at home! I have also heard tell of an incredible rendition of "Wild Horses" played by the GAM/SB with Sandy Rothman around this time frame, taped by Betty but with no tape in circulation, which I believe must be from this night. Sounds like fun! Set time capsule ..

REFERENCES:
Posted by Fate Music at 21:51