So for a long time I have been wanting to lay down a marker regarding the dating of the wonderful Garcia/Saunders show that circulates variously as June 30, 1972, September 1, 1972, and (less commonly nowadays), September 1, 1971. I'll concentrate on the former two dates --I have nothing to say about the '71 possibility-- and suggest to you that the correct date for this material is 6/30/72.

Let's revisit the case for 9/1/72. As far as I know, this dating derives exclusively from tape labels, sometimes very old tape labels (such as those in Pat Lee's collection) and sometimes very authoritative ones (such as the ones, I am told, in the Garcia Vault). Unless I am missing something, there has never been any other (kind of) evidence underpinning this date.

Let's also step back a bit. The Keystone Korner surely deserves a post all its own, but that's the sort of thing that others can do much better than I can. All I'll say is that it was operated by Freddie Herrera through June 30, 1972 and taken over by Todd Barkan on July 1, 1972. Soon thereafter (though not instantaneously), Barkan transformed it into an all-jazz format that proved artistically successful if, it seems, financially marginal

The September 1, 1972 dating is infirmed by three primary pieces of evidence, which seem reasonably independent of each other. The first is a "Scenedrome" (calendar) listing from the Berkeley Barb, the date of which I unfortunately seem not to have noted. I produce the scan below. It was done in 600 DPI, so you ought to be able to download and zoom it --check the circled entries-- for closer inspection. It shows Freddie Hubbard booked at the Keystone Korner from Friday, September 1, 1972 through Sunday, September 3. 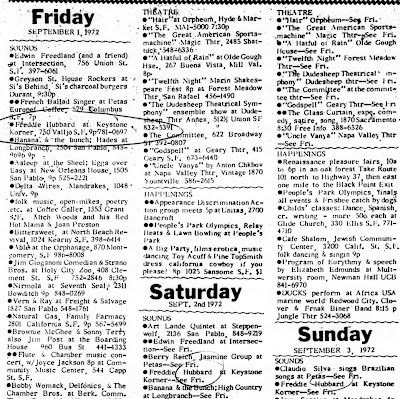 Second, Todd Barkan confirmed (presumably independent of this particular listing, though perhaps not of KK booking information from 1972) that Hubbard was playing on this date.

So far, I hope to have persuaded you that the evidence for 9/1/72 was thin to begin with and has completely fallen apart under close scrutiny.

So, what about 6/30/72?  I don't know what the Jerry Site has gathered over the years, but its listing was my initial justification for dating the material 6/30/72. Somewhat miraculously, there is a contemporary account of the show that brings a few pieces of evidence in support of the date and one not in support of it. Joel Selvin (1) reports that on the last night of Herrera's ownership (i.e., 6/30/72), the Garcia-Saunders-Kahn-Vitt-Fogerty quintet opened "their last set at Keystone with lengthy, rousing versions of After Midnight, Money Honey, and an untitled, basically unstructured instrumental" (p.1). The existing tape shows set II to begin with It Takes a Lot to Laugh, It Takes a Train to Cry (strike), but then indeed proceeds with After Midnight (check), Money Honey (check), and a version of "Are You Lonely For Me Baby?" (call that .5 strike) that melts into a crazy, dissonant, 20+ minute instrumental passage (check) before the tape cuts out. Selvin tells us that Paul Butterfield comes on stage and trades licks with Jerry for 40 minutes at that point, but --alas!-- there seems to be no more tape.

It's possible that these numbers were standard fare for the group around this time. But the coincidences are pretty striking. This date attaches to this music for awhile, and then a contemporary piece comes up that seems to connect them independently. I, for one, am persuaded.