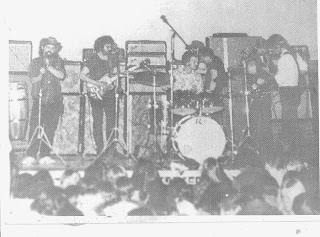 (From the 1969 Campolindo yearbook -- thanks to Marcus Buick for the scan!)

--Caveat Lector: the really colorful account that follows seems to be somewhere between partly and wholly fictionalized. It's still a good read. Please read it as a story of what might have been.--

Campolindo High School (Moraga, CA) is my alma mater. Below are the recollections of the gentlemen --Evan Hunt-- who [claims to have] organized the Grateful Dead concert there on May 16, 1969. If you have ever been to Moraga, CA, and can imagine what it must have been like in 1969, this scene is absolutely hilarious (but for some mildly offensive language -- not mine!). In any case, if you love this kind of history and the English language, I have to think that this bit will knock you out (so good I'll reproduce it twice)!