On Tours and Marketing Records

Over at Jerrybase, we have begun grouping events not only by "runs" (consecutive nights at the same venue), but also "tours". It turns out that the notion of a tour isn't quite as crystal clear as one might want it. I wanted it to be at least three out of town gigs in at least two rooms on a single outbound from San Francisco, but, especially in the Garciaverse, this ends up creating some "tours" that lack face validity as such.

Consider Jerry's March-April 1976. The decision rule above would produce the following "tours" that month:

My Jerrybase partners have suggested that's a little too granular, and I don't disagree. While they fit the operational definition I offered above, they lack verisimilitude. We'd welcome you to peruse Jerrybase's Tours Page to see what you think.

UPDATE 20220625: correspondent Matt Grady informs that musicians call this little not-quite-a-tour jaunts "runouts" - the perfect word! I am a big fan of words, and when they effectively classify a group of things that would otherwise leave me wordless, well, I like them even more. And, thank you Matt!

As it happens, this work also allows me to fill in a placeholder post I had been ignoring for awhile, centered on the following image:

Here we have an 8.5" x 11" promotional handbill listing some upcoming Jerry and Merl gigs in various cities in December 1974. I know there is a copy of this in Santa Cruz ("Business: RX-102 - Compliments of Garcia," Grateful Dead Archive, Special Collections, UC Santa Cruz, MS.332.ser. 2, box 17, folder 10), and I know this image is not from there. First, this one seems to have a crease, that one doesn't. Second, they don't allow posting of scans from the collection - a requirement which I respect and I think others do as well. I was about 99% sure I got this from GDAO, but I cannot find it there. So I can't recall how I came into this it. Anyway, I saw it in the GD Archive, and loved it, then found a copy out in the wild which I could reproduce.

Why do I love this?

Third, this particular image of beardless Jerry was drawn by Victor Moscoso for the cover of Jerry's second record, Garcia (by which I mean it was his second record, and his second record with that very title), which we all know as Compliments (Round Records, RX-102, June 1974) and I have the very tall, full color poster of the album art at the framer's, and I can't wait to get that sucker up on the wall. It's a beaut.

Four-A, I love the Pacific Northwest. Four-B, these PNW theaters hosted some killer GD and Jerry over the years. Four-C, the Ambassador, a "landmark of rococo 1920s theater design"? Yes, please. Four-D, I have an original poster from the Armadillo gigs, and it is allegedly the very copy that was hung in the 'dillo lobby at the time of the show. So, there's that. Four-E, the Golden Bear - again, yes, please and thank you. We don't list capacity for it at JB - anyone know? Four-F, the Golden Bear hosted one of my favorite shows from the last eight months of the Garcia-Saunders band, 12/29/74b, partly because of the amazing tape pulled by "Flashback" Charlie Disalvo and partly because I want that version of "Expressway (To Your Heart)" to be my walk-off music as I leave behind my earthly existence. It KILLS.

Fifth, another one of my longtime favorite Garcia-Saunders shows, 12/15/74 in the EMU Ballroom at the University of Oregon, is *not* listed on this handbill, which gives me a sense that it was booked rather later than the others. Who cares? I kind of do, to tell you the truth.

But the BIG takeaway is, Six-A, that I don't know of any other Round promotions for live gigs. Jerry went to NYC on July 1-3, 1974, to play the Bottom Line just a few days after the record came out. The shows sold out in a minute without advertising, but, of course, the record company could also, y'know, have promoted the record. Same goes with the November '74 tour, Jerry and Merl and crew with Martin blowing and the great Paul Humphrey on the drums - no advertising needed for the gigs, but what about cross-promotion with the vinyl? (Yes, I know the record wasn't JGMS. But if we held strict to that, it'd rule out the hints we do have here of a tie between the record and these gigs.)

So, here we have the imagery from Moscoso's cover art, the same lettering on 'GARCIA', and the Round Records logo. But, - Six-B - there is no evidence of the record besides this. No title. No note that there even is a record. It doesn't say "buy the new record, and come see the show", or, "come see the show and, if you dig it, buy the record. Oh yeah - tell your friends!" Instead, we see allusions to Compliments, but no direct mention of it. The Jerry heads would already have recognized some of this, of course, but mostly because they probably already had the record or, as Jerryheads, didn't need to be marketed to buy tickets to see Jerry. Maybe your average head would go to the show, and Round man Steve Brown would ply them with the advertising cards, maybe a "Here Now" poster --already framed and on my wall-- 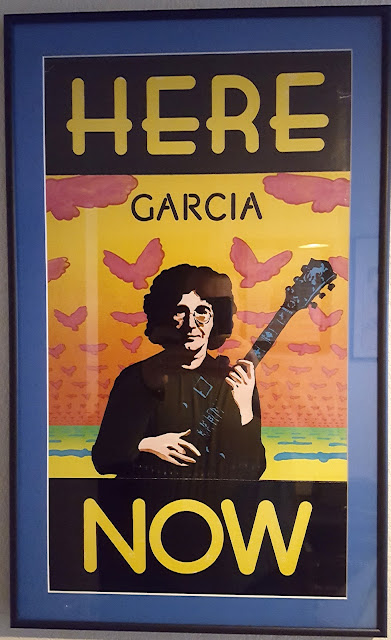 or  some other schwag, so maybe that was the idea. Maybe Anton Round was signing autographs.

I guess it just seems like a little bit of a missed opportunity. Oh yeah, one last thing, in full-circle mode: those March '76 jaunts were almost certainly "behind" Jerry's third record, Reflections (Round Records, RX-107, February 1976) - maybe by then the tie-ins were being made more explicit. But, then again, that'd redound to the benefit of United Artists, since Round, as such, had gone belly-up. I wonder why?