Old And In The Way at the Granada Theatre, Santa Barbara

Several years ago, Richard Greene was kind enough to work through some of his old datebooks with me over the phone. He showed himself at the Granada Theatre in Santa Barbara on Thursday, April 12, 1973, a date for which no Old And In The Way (OAITW) gig has been listed. I thought it was possible that he was playing with someone else this night --the man has always been highly sought after-- but I listed it as OAITW and vowed to check for clarification the next time I found myself in S.B. In the meantime, I even surmised that one of the undated OAITW live sets in circulation could be the very show, given the provenance of the tape, the room feel, other details. update: yes, I think that is correct! Among other things, the expost I identify below confirms that Orange Blossom Special closed the show, just one more piece of evidence.

I did turn up more confirmation for the gig 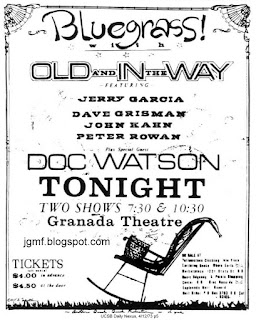 Nice to see Doc Watson opening the show, a year before he and Jer would share billings at the Golden State Country Bluegrass Festival in Marin. The preview hints that Doc might join OAITW, but it appears not to have happened. Note two shows. Note further that Richard doesn't make the billing, though he was there. Note finally that this was Doc and Merle.

update: the UCSB Daily Nexus is now available online through https://www.alexandria.ucsb.edu, and I have found the following.

Anyway, this is now pinned down just a little bit more. And here's the Granada in the present time: 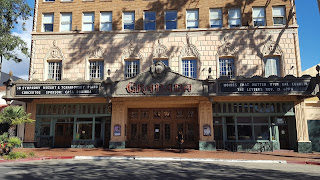 Last note: the ad here says "Theatre", and in comments JGBP points out that the current website also has it that way. Just note that Cinema Treasures and a 1975 LOM ad both say 'er', apparently incorrectly.
Posted by Fate Music at 11/23/2016 02:06:00 PM