The Grateful Dead and Santa Barbara are two great things that go great together. One little mystery has always centered on the location of the January 17, 1969 gig. The gig was absent from Deadbase, is listed as Unknown Venue chez Deadlists, and circulates from Vault -> Latvala -> world tape as “Civic Auditorium, Santa Barbara, CA”, which Corry has noted does not exist. He’s right about that (as far as I know), but his alternative explanation, that the gig was at the Santa Monica Civic, is incorrect.

The gig was in Santa Barbara. Like another one a mere four months later (5/29/69), it took place in Robertson Gymnasium (“Rob Gym” for those who pick up games there), on the stunning campus of U.C. Santa Barbara (UCSB). [update: I see that dead.net already knew this.] Must have been a ‘head or two on the Program Council that year, though, as I'll note, looks like only the latter was fully campus-sponsored.

There are some interesting Jerry engagements in lovely old Santa Barbara, too, but I will break form and ignore them for now.

With a little slaving over a hot microfilm reader, I found the following: 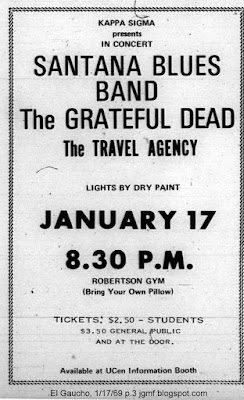 The ad reinforces the lost-from-memory feel of the gig, a bit of an in-your-face guerilla exercise with Kappa Sigma. The Santana Blues Band and its successors are well documented, and this show is not listed at the canonical Santanamigos site. If I were an objective observer, I would say SBB headlines over the Dead as a matter of presentation, which is pretty amazing given how early in Santana's run this occurred. It's useful to remember just how Spanish Santa Barbara is, perhaps - maybe Santana would bring the vaqueros' kids in from the high school.

El Gaucho advertises what's going to go down in technicolor glory, even through bad microfilm in black and white. In the sweet spot, top-left of the front page, soak in the picture of a bunch of crazed Deadfolk in various degrees of sprawling on the steps of 710 Ashbury, over caption beginning “DROPPING IN ROBERTSON GYM”, (caps original), and a–wink-wink and a-nudge-nudge.


Perhaps it’s no surprise that the show seems to have fallen somewhat out of memory – many may not have imprinted for very long in situ, more the decaying trails of an up-close camera flash.

Listening to the Dead tape now and it's pretty bad. Pigpen is lost in Lovelight, even Dark Star > Steven > Eleven leave me totally flat. Death Don't is good, TIFTOO is fine but uneventful, and a *very* tentative Cosmic Charlie closes things out. The show is way below average for the period, for sure. It sounds like a good crowd which cheers a lot for the Lovelight (maybe the sound was bad), but eventually The Man drops in and shut things down, and young Mr. Weir puts a point on things: