The April 1975 Legion of Mary Tour

LN jg1975-04-10.lom.early.aud-moore.117250.flac2496
In April 1975, Legion of Mary (Jerry Garcia, Merl Saunders, Martin Fierro, John Kahn and Ronnie Tutt) went on its only tour, performing, by my count, twenty-five shows in the seventeen days between April 4th and April 20th (inclusive). They started in Brooklyn, spent a bunch of time in the core Northeast (New York, Boston, Philly), down a bit further south (Washington, Atlanta) and up to the upper Midwest (Chicago, Milwaukee, Madison), mostly playing mid-size clubs and theaters.

There is a great deal to say about this tour, and I’ll only be able to scratch the surface here. My overarching point would be to remark on the degree of institutionalization represented by this tour by this band. Not only is there a set tour (which the innominate Garcia-Saunders aggregation had test-flown in November 1974), but it’s with a band with a name and fixed membership. It’s not really that surprising – the GD was on hiatus, and there was space for a formalized alternative Garcia outlet—but it is noteworthy. Remember that Garcia had only toured outside the Grateful Dead three times prior to this: January 1972 behind Hooteroll?, briefly (and I think abortively) with Old and In the Way in June 1973, and the November 1974 Garcia-Saunders tour. Looking through the other end of the telescope, this would be the final time Garcia would tour behind a non-GD band that wasn’t eponymous --$5 word … “bearing his name”. When next he returned to the Northeast, he’d be in front of the newly-christened Jerry Garcia Band, which, with tiny variations (e.g., Jerry Garcia and John Kahn) is the name under which he’d cross time zones for the rest of his too-short life when not playing with the Grateful Dead.

The core of the tour, to my reckoning, was a three-night, six-show run (April 8-10) spent at the Bottom Line, 15 West Fourth Street, New York, NY, 10012. I should certainly say more about this venue, but Corry has said more than I could, anyway. [see also Jerry's Brokendown Palaces entry for the Bottom Line.] The shows were promoted by Allan Pepper and Stanley Snadowsky, as indicated by this ticket for the Thursday (April 10) late show, which I believe has been shared at the Merl Saunders Facebook page. 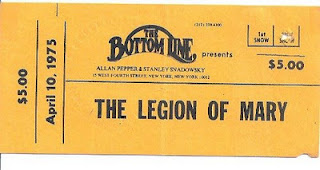 Jerry and Merl had played the Bottom Line twice before, with the July 1-3, 1974 standalone shows (i.e., not part of a tour), and the full November 1974 tour, which had featured the great Paul Humphrey on drums. Somewhere I came across something that said the July shows were envisaged as a dry run for the November tour, but now I can’t find the source. I have more to say about the November tour as well, which features some naming and billing variations that interest me (to say nothing of some pretty decent music). I have already discussed it once in terms of when it ended, but there’s lots, lots more to say.

What fascinates me about the April Bottom Line shows, for whatever reason, is that, as far as I can tell, they went totally unadvertised. If the Grateful Dead have come to be seen as pioneers for what we would now call viral marketing, it’s worth noting that the first extensions beyond that group may have been to Garcia’s side projects. The Bottom Line’s standing ads in the Village Voice just sort of skipped over these three nights (see the issues of March 31, 1975, p. 114, and April 7, 1975, p. 106). Yet the shows quickly sold out (can’t find a cite for that, but I think there is one) and one of them, the Tuesday (April 8) late show, was even reviewed in the New York Times (John Rockwell, “Legion of Mary Fans Cheer Band’s Winning Music,” New York Times, April 10, 1975, p. 47). Again, it’s no big deal, but it just fascinates me as a slight deviation from the otherwise pretty straight institutionalization of the whole affair.

My own judgment has long been that these April 1975 shows are not that great, and revisiting this April 10th early show as taped by the late, great Jerry Moore does little to dissuade me from that view. Stevie Wonder’s “Creepin’” [Allan] is an interesting novelty, and this version shows some promise, but it never really takes off. Two of the Garcia selections on this night, “It Ain’t No Use” and Jesse Winchester’s “Every Word You Say” [Allan | Schofield], are among my least favorite tunes from the period and just don’t do much for me. The Merl Saunders vocals, “My Problems Got Problems” [Allan | Schofield] (credited on Fire Up+ to Saunders and Carrier) and another great Stevie song, “Boogie On Reggae Woman” [Allan | Schofield] are both a little off, especially the former. It starts off with all kinds of whacked out tempos, way too fast for Merl to keep up with lyrically, and it never really settles in. It ends with kind of a thud after Merl tries, unsuccessfully, to improvise some lyrics to fit the unfamiliar tempo. They pull BORW together a little bit better, albeit after a rough start.

(Aside: I love how Merl got Jerry to play Stevie Wonder tunes. Both “Creepin’” and “Boogie On Reggae Woman” appeared on Fulfillingness’ First Finale [1974]. A propos of nothing, that album also has a track titled “It Ain’t No Use”, but it’s not the same as the Jerry Williams / Gary U.S. Bonds / Don Hollinger track played by Garcia and figuring in the present show’s setlist.)

The only real standout, to my ears – and it is a standout—is Dylan’s “The Wicked Messenger” [Allan | Schofield]. I have no idea where Garcia got the idea to turn this song into a raunchy, grinding, wailing electric guitar dysphony … had someone else covered it this way before? If Dylan’s album version featured a country lilt to contrast the grim lyrics, Garcia’s version met darkness with darkness. It’s a biting, metallic display of anger and virtuosity, not quite the equal of the version from the Great American Music Hall on May 15, 1975 (featured on the bonus disc Absolute Mary), but still a show-stealer and well worth ten minutes of anybody’s time.

All right, listening notes follow. Thanks again to Jerry Moore (RIP, STW), Rob Berger and David Minches for getting this great recording into the ears of the masses.

! R: this is the only known recording of this show as of 11/2011. It's a characteristically excellent Jerry Moore tape.

! t03 Creepin' they find a nice little groove from 4:53 around Garcia's solo. This has real promise. It's better than the 2/14/75version I just listened to. It even swings a little bit.

! t04 PGP they have the tempo way too fast for Merl, and generally. Around the 12-minute mark they are completely lost, Merl trying to improvise through a tempo that he just doesn't have a handle on, not that successfully.

! P: t06 WM I love the raunchy tone Jerry gets on this during his first solo, late 1-min to early 2-min mark. And he is still shredding in the early 3-min mark. Wow, this is very heavy stuff.