Here's a little pictorial from the campus newspaper, the California Aggie, regarding the show at Freeborn Hall, UC Davis, Davis, CA on January 21, 1971.

So the Marmaduke picture answers the NRPS question. Then I have a few other questions from this great little display. First, who are the guys besides Weir, Garcia and Kreutzmann in the bottom-right panel? The guy far-right could be Mickey, I guess, but to the right of Billy in the picture ... who is that? Second, there's the James and the Good Brothers reference. And, sure enough, a brief review in the same paper ("Dead, Riders, Brothers," California Aggie, January 27, 1971, p. 6) mentions that the show went James and the Good Brothers, NRPS, and two sets of GD.


So, yes Virginia, the New Riders did play Thursday 1/21/71  at Freeborn Hall, UC Davis. And it appears from Jim Quigley's photos to have been "fantastic". 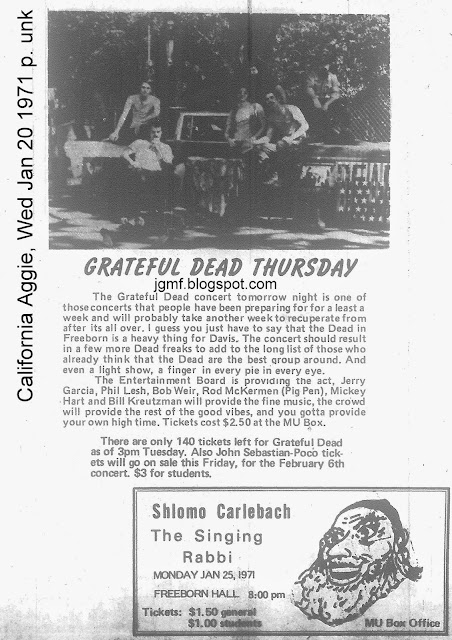