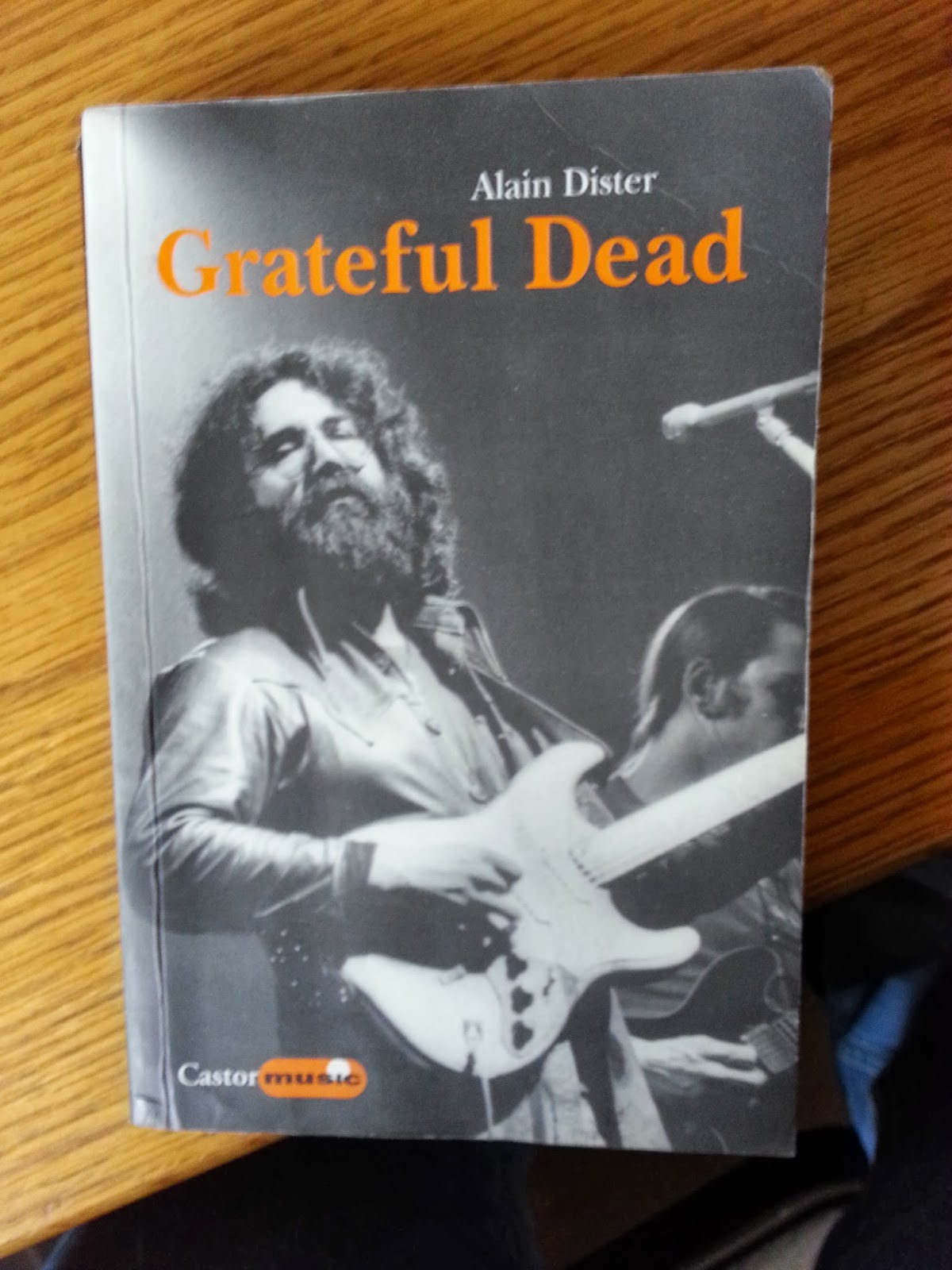 I cannot make any representation for the accuracy of any of this. It's a fascinating piece, of course. Dister was a famous French rock journalist (wiki) who spent ca. 1966-early 1968 in San Francisco, apparently spending a ton of time with the Dead, if the narratives are to be believed. I am sure it is perfectly well based in actual events. My sense is that he's more accurate on the early days (which I focus on here), when he was around, than later stuff, which he gleaned secondarily and in which I have found lots of mistakes on the particulars. Read it like you read Rock Scully's book (1996).

There are some new-to-me band names and such that are more up LIA's alley than mine. There are pre-GD bands and lots of little vignettes. It's a loose participant observation study. Fascinating.

This is an entry in the Reading Notes series, in which I just leave quotes and little annotations of stuff I have read. I make no representation of completeness, it's just whatever catches my eye. Aren't stochastics fun?!? As Ishmael said:


I promise nothing complete; because any human thing supposed to be complete, must for that very reason infallibly be faulty.

Dister 2007, 22: Jerry’s “beau-père” was Wally Matusiewicz ... was that Ruth’s husband? Says he taught Jerry the rudiments of the guitar, don’t remember that elsewhere. “Wally was not a drinker, but he didn’t disdain the good Lord’s herb, which he considered less dangerous than alcohol.” #family, #Wally Matusiewicz, #Ruth Garcia

Dister 2007, 22: his teacher at the California School of Fine Arts was named Wally Hedrick, who was close to the Beat poets. (?), #Wally Hedrick, #Beats

Dister 2007, 24: after taking a joyride, he was offered a choice between prison and the Army. #Army

Dister 2007, 24: his Army drill sergeant “initiated him in the delicate art of finger picking on an acoustic guitar”. “Certain of his comrades were part of the Kingston Trio” (?) #acoustic, #folk

Dister 2007, 24: before the joyride and the military, Jerry “briefly took part in a jazzy group, The Chords, in the little Northern California town where his mother placed him” #pre-GD

Dister 2007 p. 36: “One can get nothing from the banjo if one does not have an innate taste for a job well done” ... JG as workaholic. “The rest, love, family, hanging out with friends, and the corresponding substances, those were always a sacré foutoir, the uncontrollable part of his existence” ... suggests that music was the one thing Jerry could really exercise some control over. #workaholism, #drugs

Dister 2007, p. 44: ca. 1963, while married to Sara and working at Morgan’s, in a band as follows. Garcia on banjo. Hunter on guitar. NB NRPS parallel: “Hunter was the first victim [of Garcia’s expectation of virtuosity]: he was thanked and thrown out of the group ... An enthusiastic player but with little talent, he gave way to Eric Thompson.” Also Pigpen, Kreutzmann. Name of the band? “Elves, Gnomes, Leprechauns and Little People’s Chowder and Marching Society Volunteer Fire Brigade and Ladies Auxiliary String Band” ... became Black Mountain Boys. #pre-GD, #Eric Thompson, #Bill Kreutzmann, #Pigpen

Dister 2007, 44: autumn 1963, Garcia and Hunter are in the Badwater Valley Boys and meet Bill Monroe at the Ash Grove in Los Angeles. Implies that this was before 11/22/63, JFK assassination. #bluegrass, #Ash Grove

Dister 2007, 66: had to change from Warlocks because there were bands by this name in England, Florida, Texas (including future members of ZZ TOP) and a NY-based quartet comprising Lou Reed, John Cale, Sterling Morrison and Mo Tucker, the future Velvet Underground. #pre-GD

Dister 2007, 90: “Jamming together, or sitting in with each other’s bands, is what fundamentally distinguished San Francisco’s music scene from LA’s.” #collective improvisation

JGMF: The hoot and the open jam session spontaneously evolved in many different contexts. Multiple discovery is common in science (wiki), biologists see tons of convergent evolution (wiki), and even some anthropologists talk about cultural universals (Brown 1991). Anything that has this quality of coming up again and again in the human condition is, in brief, probably really important. And playing music together is one of these kinds of things, really down to the root of our natures. I am talking shelter, warmth, maybe some food and drink, some good old goddamned human company. Get a room for the sex if you can, but the drugs and rock 'n roll are never far from the fire, and that's true for white folks in Appalachia and black folks in the Mississippi delta. Beat a drum, pluck a string, sing a little. In the American context, hollers, Gospels-spirituals, blues, jazz, soul, R&B, funk, and any other "black music" you can think of, whether South, North, Midwest, Great Migration, or wherever, has its improvisational tradition, and this is no less true of your old-timey, folk, Gospels-spirituals, bluegrass, country, rockabilly, rock or heavy metal. It's a people thing, painted in the riotous colors of every other kind of earthly variation.

Dister 2007, 126-127: story of stealing the equipment from Monterey Pop. P. 127 equipment (le matos) “duly returned eight days later [6/26/67], after having been put to use during a free concert in the Panhandle, a concert in which both Eric Burdon and Jimi Hendrix participated (but where are the tapes?)”

Dister 2007, 134: the 10/2/67 bust and subsequent police harassment “ended the [MG-JG] dream of living in the middle of the cauldron” of 710 Ashbury, with the baby and all that, living in the attic. “They would first move near the Palace of the Legion of Honor, not far from the Presidio where Jerry did his brief military service. A little later, they’d cross the Golden Gate Bridge for Larkspur bungalow rented out by John Cipollina’s father.” MG in Greenfield says they lived there six months. #houses

Dister 2007, 141. This is interesting about early GD musical interactions. “Early in November 1967, Pigpen (or maybe Garcia) allows me to accompany him into the recording studio.” Anthem of the Sun ... “The little studio is somewhere downtown. Everyone’s there, squeezed around the console. Garcia’s listening to live tapes, pushing buttons, switching from one solo to another, juggling the mix, barely taking the time to the others what he had in mind. Weir s’emporte, he’s like that, rock ‘n roll energy, shooting nasty looks when he didn’t agree. The exchanges are pretty sharp, one could think that these guys aren’t on the same wavelength, that the group is at risk of imploding at any moment. Several alternative musical conceptions, as many different ways of engaging them ...” #Bob Weir

JGMF that's a cool little piece of color right there.

Dister 2007, 150-151. Description of a February 1968 gig at San Quentin. He says “I believe that the day of the concert, or the day before, they found Neal’s body on the side of a railroad track somewhere just outside of San Miguel de Allende, Mexico.” That was February 4, 1968. Later below, he says that “Phil Lesh had stayed in Oregon after a series of concerts in Portland and in the colleges and universities in that neck of the woods. So Bob Weir played bass.” I think he is conflating some stuff here. The correct date, based on contemporary ex post reports (the best kind of data) clearly confirm Thursday, 2/15/68 as the date of this event (UPI 1968; Torgerson 1968; see also Hannan 2009 SQ LLD post).


Contrasts 5/8/69 People's Park with 5/7/69 GGP show. "A distillation of the ending Sixties: a few show in Golden Gate Park, with Bear at the audio console, while ten miles away as the crow flies, tear gas is still sticking to the trees on the Berkeley campus" (Dister 2007, 158). #jerry and the Jeffersons