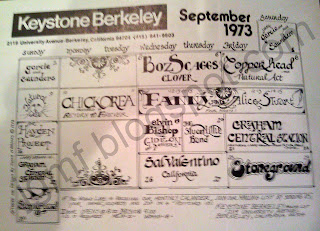 This calendar of September 1973 gigs at the Keystone Berkeley shows Jerry Garcia and Merl Saunders there on Saturday, September 1, 1973 and Sunday, September 2, 1973. These gigs are new to The List.

Note that OAITW was advertised for shows out east on these dates, but that I concluded about a year ago that they "probably didn't happen". I think this calendar allows us to remove the "probably" from that formulation.

None of this answers the question of what happened to the extensive out-of-state touring planned by OAITW during summer 1973, but canceled. It's a question I hope to address at some point.
Posted by Fate Music at 7/01/2012 11:08:00 AM