Can anyone anywhere add anything about these three Grateful Dead shows in Walnut Creek, CA? Little is known about the first, and next-to-nothing about the second two. 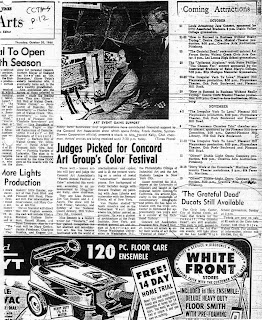 
The Civic Arts Center, City of Walnut Creek, advises that tickets for the concert, "The Grateful Dead", are still available. This rock 'n roll, second in the series of the Art Forum events, will take place at the Las Lomas High School gymnasium, Sunday at 3 p.m. Tickets are now on sale at $2 each at the Civic Arts Center, 1445 Civic Drive, Walnut Creek.

I'll leave it to the GD historians to see if we learn anything from that. From a "Walnut Creek" (or a "1960s East Bay Psychedelia") perspective, it's just a little splash of color on a phenomenon that is very obscure (or penumbral, with your --ch-ching!!-- $5 word of the day).

This was my first Grateful Dead show. There were maybe 50 -100 curiosity seekers. Very few teens like me. It was a free "arts and lectures" - type concert in the afternoon. Jerry wore a yellow Pigpen t-shirt. They were eating cookies and offered them to the audience. No takers. LOUD and good! Life changing concert for me. ... Someone passed out Golden Road to Unlimited Devotion fliers. A week or so later, I journeyed to 710 Ashbury and purchased a Pigpen long sleeve olive green polo shirt with turtle neck from MG. A few years later I gifted it to Debbie, background singer on Aoxomoxoa.

Sounds amazing. I wish I had a "Pigpen long sleeve olive green polo shirt with turtle neck [bought from Mountain Girl]". You get your sweet pippy I do. The fliers sound interesting too, natch ...

The SMC website doesn't really do the school's very interesting history justice. That said, let me just keep "Slip Madigan" in my head as the "Rudy" of this little college (with a $111 million endowment ... not bad!) in the gorgeous rolling hills of the east bay. Mmm mmm mmm.

update: see http://jgmf.blogspot.com/2015/09/grateful-dead-at-cliffords-catering.html for more on these 1968 shows, including proper venue, etc. etc. What follows is just kept for the record.

dead.net lists "Looking Glass" as another billed band, not as the venue name. No venue name, just address. Funny. Given what I observe about the location below, I have a hunch that this was not a club at all, but a house party.

There is almost no information anywhere about these shows. I looked in the CC Times for evidence of this gig or, poking around this time period, listings for this venue. I found nothing. Google really turns up nothing. Corry's "Grateful Dead Tour Itinerary March-April 1968" avers that "this event and venue are the most mysterious of this time period". Neither LIA nor Ross has much to add in comments.

The location, 1300 Boulevard Way, Walnut Creek, CA, 94595, is an odd one and would have been much odder in 1968, when this area probably still had walnut trees. Boulevard Way has always been an odd little corridor in a little town that has a few of them (despite now being extreme shi-shi). It runs southwest from the shadows of the I-680 / US-24 interchange. It was an odd little no-man's land in the 1970s. Even presently, it features mixed light industrial / commercial (though not much retail) and multifamily residential. It gets a little leafier and turns due south through more single family type homes, ending at Olympic Boulevard. As I recall, that street parallels the old train tracks. Coming in off of Boulevard Way, to the right Olympic runs due west toward where Reliez Station would have been (in Lafayette). The left it runs northeast and takes you toward the southern edge of Walnut Creek.

From the street view of 1300 Boulevard Way, you get a sense of the neighborhood as it exists in my mind. Not the Nieman Marcus side of town, though presumably, now, expensive by any sane measure. It would not have been expensive in 1968. This is a pretty obscure place to have a night club, I can tell you that. I am not surprised that it (presumably!) wasn't around for very long, if it really was a nightclub. Ross speculates that it might have been a rehearsal or something. I'd guess it was a house party, or damn close to it. Maybe some kids rented a warehouse space and threw a party. Las Lomas is not that far, and the old Del Valle High School (closed 1979, thank you Proposition 13) was even closer. The absence of attendees listed at dead.net makes me very, very suspicious, and I think the dead.net notation (which probably derives from Deadbase) listing "Looking Glass" as a band and not a venue provides an important clue.

Surely if there were a psychedelic club in Walnut Creek in winter-spring 1968, even if only briefly, there would be some memory of it. Was there any psychedelic scene in the East Bay to speak of? Here's hoping one or two recllections might be jogged by this post.
Posted by Fate Music at 5/19/2011 02:05:00 PM