At some point I need to figure out Pepperland. I see from a Rock Prosopography post on Sons of Champlin setlists that the venue was the Bermuda Palms ca. 1967, then became Euphoria Ballroom, then became Pepperland. Nothing turns up on Rock Archaeology.

COAU has a little bit. With an address of 737 Francisco Blvd. E, San Rafael, CA 94901, it is apparently recently known as Litchfield's Zebra ?Restaurant?:

But my purpose here is not to dig into Pepperland, but to follow up on the gig on December 21, 1970. I had mentioned it in one of the recent Hooteroll? posts, and I reproduce an ad from the Pacific Sun that I had also posted there. (What can I say, I like this image?) 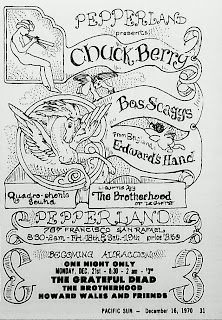 In comments, cryptdev confirmed that Howard Wales was not present, so the billing in the ad is wrong.

We have good eyewitness information on this at Deadlists, however. This from MP:

I attended part of this show. It was indeed the Jerry Hahn Brotherhood opening, with a spectacular set. Next up was a blues band (not Howard Wales) that I can't recall the name, but John Kahn was their bass player. The New Riders played next. Around 2 AM, Garcia, Lesh, Hart, and David Crosby came out. They opened with "Drop Down Mama," and also played "Alabama Bound," "Triad" and "Deep Elem Blues" before I was dragged kicking and screaming from the hall by my ride, who needed to work the next morning. The ads billed the show as "Acoustic Dead" but this segment, at least, was electric. At one point, Garcia introduced the group as "David and the Ding-A-Lings" (not Dorks!) and Crosby countered with the name "Jerry and the Jets." Weir and Pigpen were visible wandering around backstage, so it is entirely possible, even likely, that the entire Dead played even later, as curfew clearly was not an issue.


So I'll just extract and reformat. On this night, we have the following:

If the GD did play, this would have been a rare "threefer" day for Garcia. The only other days I can think of him playing live with three different bands, off the top of my head, were the closing of the Fillmore West run (July 2, 1971) and, you guessed it, the Golden State Country Bluegrass Festival on April 28, 1974. (He played three separate shows on 6/5/82, but all as the Garcia-Kahn acoustic duet.)

With Weir and Pigpen in the house, I'd wager the GD were at least slated to play. I'd even say there might be better than even odds that the GD played in some configuration.

Wonder where Mickey Hart's head was at, given how things would shake out in regards to Perfidious Lennie over the next few months? I also wonder whether his barn studio was being planned or built yet?

Would JG ever play at Pepperland again?
Posted by Fate Music at 13:11