Still can't believe how little I've had to say about Reconstruction. All in due time, I guess. 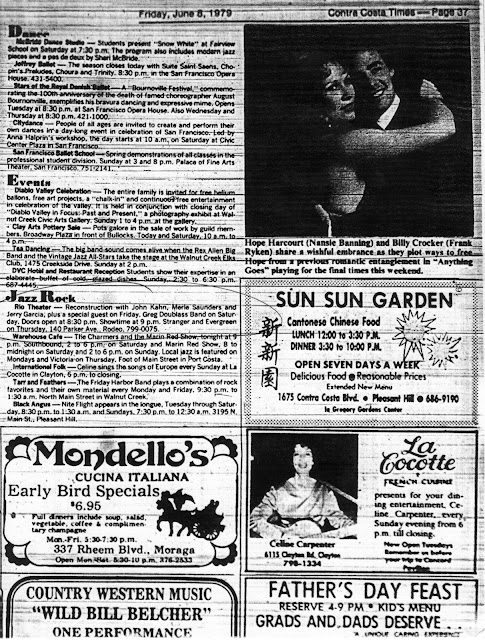 By contrast, I have never seen any firm evidence for a listing at the Rheem Theater. That's how it's listed at TJS, and that's how it is listed on circulating tapes (e.g., shnid 23675). I suspect those two data are not independent of each other. In any case, I'd guess that there was a (perfectly understandable) transposition of Rheem Theater for Rio Theater somewhere along the line.

I didn't crop the listing too closely, for a few reasons. First, there's just other stuff in there and you never know who'll find something interesting. Second, and maybe this is more because I am listening to some Buck Owens, but it reminds me of how "country" some of Contra Costa County still was in 1979. I haven't been to Rodeo in forever and maybe it hasn't changed at all (based on the Google Earth image above, it doesn't look like it!). But most of CCC is completely transformed since that time period, and its interesting to remember what a hinterland it was in the late 70s. Third, I wanted to give a sense of the degraded quality of the microfilms of the Contra Costa Times are a the central CCC library in Pleasant Hill. I certainly don't blame the facility nor, especially, the librarians - there's clearly no money being devoted to that stuff. But this wealth of historic material may just disappear one day due to budget cuts. [soapbox] Please consider donating to your local library! [/soapbox]

Was anyone there? Has anyone ever seen any other hard evidence of this show taking place at the Rheem?

Rio Theater seemed like a weird little spot, which is kind of a microcosm for how Rodeo strikes me. I'd bet more time looking through the Contra Costa Times listings would reveal lots of stuff (at the Rio and elsewhere). Rock Prosopography lists an 8/10/69 show there by Sons Of Champlin and South Bay Experimental Flash, and LLD lists a March 4, 1978 Hunter and Comfort/Peter Rowan gig. Somewhere I have a note or two about the venue. Anyway, I guess it made sense for them to advertise in the Times, which always seemed more East county centered (Lamorinda, Walnut Creek, Pleasant Hill, Concord, even Antioch). There are some pretty weird east bay backroads between those towns and Rodeo, and back at that time there wasn't necessarily a whole lot of police presence on them - could be fun to drive a little, see a show, and all that.


Anyway, consider this my argument in favor of changing the venue for this show from Rheem Theater, Moraga, to Rio Theater, Rodeo.
Posted by JGMF at 13:12